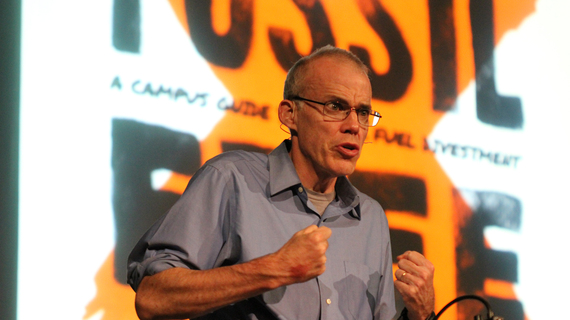 "When the history of this time is written, Shell will get more than a footnote," noted American author, turned climate activist Bill McKibben whilst speaking at the London School of Economics last week.

Having just come from a climate conference sponsored by the Anglo Dutch oil giant, the irony of the juxtaposition certainly wasn't lost on him:

They were the company that when it emerged that the Arctic had melted thanks to our efforts, they didn't say: "Perhaps, we should stop what we are doing." Instead it said: "Oh, this will make it easier to drill for more oil up in the Arctic."

McKibben's disparaging remarks came two days after the United Nations issued it's "final warning" on the ever-alarming state of our climate.

Six months after it revealed that the scathing impacts of global warming will leave "no one untouched", the Nobel Peace prize-winning body has now warned that its impacts will eventually become "severe, pervasive, and irreversible."

Having penned one of the first books about climate change some 25 years ago, McKibben presumed that "reason" would ultimately prevail. And, named by Foreign Policy as one of the top 100 thinkers of our time, he ought to have been right.

Yet, during the course of that time, the concentration of carbon dioxide in our atmosphere has continued to soar past one record high after another.

And, last September, the UN revealed that our planet is warming much faster than originally expected. World temperatures may now race past the life-threatening four degrees celsius mark well before the turn of this century.

Citing a recent Stanford University report, McKibben says that "if the temperature goes up by two or three degrees, then the number of calories on the planet goes down 30 percent."

One need only remember the food riots of 2008 to imagine what lies in wait.

According to the UN, we still have time to avoid such a destructive fate. But, global carbon emissions will have to approach zero by the end of this century. That means that three quarters of existing fossil fuel reserves will need to stay in the ground.

And, considering that nearly a quarter of the world's electricity came from green energy sources last year, it ought to be an achievable task.

Yet, in spite of the alarming state of the science, McKibben says that oil giants like BP, Exxon and Shell are still allowed to plunder the earth in search for even more hydrocarbons. And, to make matters worse, governments pay them nearly $2 trillion every year to do it:

"I think what scares me the most about climate change," says McKibben, when I talked to him earlier in the day, "is that our species, which has been given consciousness and foresight, is making the decision to not do anything. It's such a depressing commentary on the human race."

Concluding that writing yet another book "wasn't going to move the needle very much", eight years ago, McKibben, together with seven students, started to build 350.org, a social movement designed to take on the fossil fuel industry.

It may be a classic case of David versus Goliath, but since then it has launched one of the fastest growing divestment movements in history.

Modeled on the same campaign used to help bring down apartheid in South Africa, it has been steadily encouraging investors to shift their money out of dirty fossil fuels.

And, this September, it spearheaded the largest climate march in history.

Timed to take place two days before world leaders gathered in New York for an emergency UN climate summit, more than half a million people in over 160 nations across the globe, took to the streets to call on their governments to prevent the catastrophic warming of our planet:

"It was beautiful to see," recalled McKibben, to the packed lecture hall.

But, the sweetest development of all was when the Rockefeller brothers announced that they were divesting their holdings out of fossil fuels. They were the original fossil fuel fortune. And it was their heirs who decided that it was no longer prudent, nor moral to be investing in this stuff. It was an important moment.

Addressing world leaders two days later, U.S. president Barack Obama said: "Our citizens keep marching. We cannot pretend we do not hear them. We have to answer the call."

America has now pledged to set the pace in all important climate talks in 2015. And, China has also promised to bring something meaningful to the table too. With the world's two largest polluters on board, there are now hopes that a strong treaty may be signed in Paris next December.

But, when i asked McKibben what he thought, he said: "Something will happen in Paris, but it won't be enough. It could be helpful. But, I'm afraid that we will be working just as hard a day after Paris, as we will the day before."

Adopting a similar indifference towards politics, he says that the outcome of the recent U.S. midterms, or the 2016 presidential race is inconsequential:

Our job is to change the zeitgeist. It makes it somewhat easier to have someone in power who is congenial. But, i know that Nixon timed every piece of important environmental legislation in history because 20 million people came out for Earth Day in 1970. I'm more worried about making that happen than who we are electing.

According to McKibben, the solution lies in building "enough pressure within the system" so that "political change is inevitable," regardless of who is in the White House.

Winner of the 2013 Gandhi Peace Prize, McKibben has come a long way considering that campaigning "wasn't a natural move" for him: "I'm not an orator, organizer, or activist. Like most writers, i'm an introvert. It's really nice to be with you all," he tells students, "but i would rather be at home typing."

However, as Frederic Douglas, a former slave turned abolitionist once said: "Power concedes nothing without a fight. It never did, and it never will."

And, much like the abolition of slavery, the end of apartheid, and the spread of universal suffrage, "history is our proof that the impossible is smaller than we think," wrote a group of NGO's in the Guardian earlier this year. Standing on the front lines of our current battle to save our climate, McKibben says:

There is absolutely no guarantee that we can win this fight. Some scientists say that it's already too late. But, i don't know. I know that the best science indicates that we still have a shot. And, one thing that I'm certain of is: at least there's going to be a fight.