May in the Summer is a comedic drama about a Palestinian-American writer who goes home to Jordan for her wedding. The unconventional bride's impending nuptials are the inopportune occasion to air out the cooped up emotions of a broken family who still love each other -- in the middle of a scorching summer. I had the pleasure of interviewing the writer, director, and star Cherien Dabis shortly after the film's world premiere last year at the Sundance Film Festival.

RR: How did the inspiration for May in the Summer first begin?

CD: It began with the idea of letting go, something I struggled with when I began writing the script. How do we overcome our painful histories and constructively move into a better future, to discover freedom that's possible when we let go? The movie explores this question on a personal level, but also draws parallels to the political. 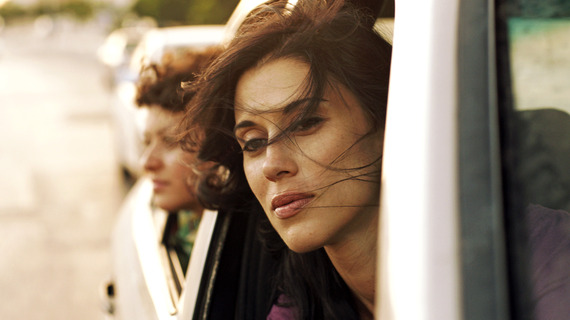 RR: Your first film, Amreeka, is about a Palestinian family who moves to Illinois. May in the Summer, on the other hand, is about a Palestinian-American who returns to her childhood home in Jordan. You also make your acting debut in this film, starring as the lead character, May. How do identity and travel shape your stories?

CD: Amreeka only explored one aspect of my cultural identity - being an Arab in the United States. The other aspect of my identity arose from routine summer trips to Jordan over the course of 30 years. In May in the Summer, I wanted to show my American self in an Arab land as a follow-up to my first film where I portrayed my Arab self in an American space.

RR: This is the second film you've had selected for the prestigious narrative competition section of the Sundance Film Festival. On opening night of this year's festival, you sweetly apologized to your mom for going through her drawers on screen. What was it like to film in your mom's house?

CD: We shot there for 10 days, and displaced my mom, so it was tough on her. Hence the apology. My mom and two of my sisters live there now, and both of my sisters worked on the film! So it was truly a family affair. It was fun! It was my first time working in Jordan, so it was a cool experience to go back and bond with the place in a whole different way. And there's a burgeoning film community there, so it was great to feel a part of it and to contribute to its growth.

RR: You've traveled all around the world exhibiting and making films. How was it shooting in Jordan?

CD: Most of the films that shoot in Jordan are shooting Jordan for somewhere else - Iraq, Afghanistan, Palestine -- for mostly war-themed movies shot in the desert, near the borders. This movie really shot Jordan for Jordan. I wanted Jordan to be a character in the film. But it was enormously challenging! There aren't a lot of resources on the ground, so we brought our entire main crew in from Beirut, Paris, London, New York and Los Angeles. We flew in our equipment because the borders with Syria were closed due to the political unrest and we couldn't drive it in. We were essentially making an international film, but on a budget the size of an American independent film. Plus, it was the height of summer -- 114 degree weather! 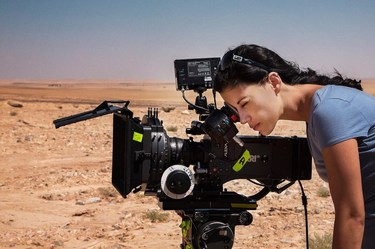 RR: What are some of changes you have noticed in Jordan over the past 30 years?

CD: When I was a kid, there wasn't a single American brand in the supermarket. Now there's evidence of the West everywhere- fast food chains, shopping mall culture, American pop music on the radio. So while the country is becoming more conservative and more Islamic, it's also more Americanized than any other Arab country. That's a side of the Arab world we don't generally see on screen. For example, the Dead Sea has these incredibly healing waters within this peaceful and serene place, yet all along the coast there are huge luxury resorts promoting "spring break"-like party atmospheres. And then you have the occupied West Bank just a stone's throw away. Immense political unrest is all around you, and yet people are partying like there's nothing at all happening.

RR: How does Palestine figure in the film?

CD: It's the motherland. Jordan has been this refuge for so many people who cannot yet go back home to Palestine. May fits in -- yet, she is displaced. To May, Palestine is an idea, an intellectual idea she explores culturally in her writing. She longs for it but can't really grasp it. She feels useless in the face of it. In the scene when the girls are floating in the Dead Sea -- Palestine is right there across the water. In that moment, they're feeling conflicted about living a normal existence, guilty about their own privileged lives and worrying about trivial wedding details, while other people are suffering and sacrificing their lives. I wanted to explore that diasporic guilt.

I wanted to capture daily reminders of being in a region where anything can happen at any moment. Where fireworks are always being set off in the summer for weddings and graduations, but they also sound like explosions. Stability is always relative. In the United States, we are generally shielded from that. There aren't those scares that make you realize that life can change so radically in a moment.

RR: Some reviewers have called this a wedding movie. Is that how you see it?

CD: If anything, it's a divorce movie disguised as a wedding movie. It's an anti-wedding movie. [Laughs] The film defies the wedding genre, it is actively questioning the tradition of marriage. May is not the typical bride who is super excited about her wedding. She lets her mother-in-law do all the planning. She's an ambitious woman who is questioning whether her own marriage will be worth it given what her parents have been through.

RR: What was your process like for exploring the intimate dynamics between each of the family members?

CD: It was long and arduous -- as usual! [Laughs] I wanted to create a family of distinct characters with conflicting points of view from both political and religious standpoints, a family at war with one another. The father [Bill Pullman] is an American -- teased as "the imperialist" -- who was unfaithful to his ex-wife, a Palestinian woman [Hiam Abbass] who consistently sees herself as the victim. Their daughters [Nadine Malouf, Alia Shawkat] are caught between their parents and the countries they represent. When they first come together for May's wedding, they are on their best behavior, but it all completely unravels -- until they learn to reconcile their differences at their most vulnerable. I wanted to explore religious difference within the context of a family. Religion is such a contentious issue in the Middle East -- on a political and personal level. But families continue to support each other despite these differences. Ultimately, May is searching for her own sense of identity and truth. To get there, she needs to get past the distractions she sets up for herself in her daily life. The question she avoids throughout the movie is, 'What do I want?' To find the sort of faith she needs, she learns to trust her instincts as a guide towards her own truth.

This Friday, May in the Summer will be released in theaters near you in over 15 cities around the nation, including Los Angeles, Washington DC, Atlanta, Detroit, Miami, Portland, and Minneapolis.

To read more about May in the Summer, read my critical review. For more information on release dates and show times, visit the Cohen Media Group.