Gregg Lehrman is a composer and entrepreneur who has helped score music for a number of big TV shows and films. Lehrman has also invented an ingenious new musical instrument, REV, which reverses sounds. I spoke with Lehrman about his invention and his work in the entertainment industry, which has brought him into contact with everyone from Steven Spielberg to Darren Aranofsky.

You just invented a new kind of instrument -- not something we hear every day. Tell us about it and how you came up with the idea.

Most music nowadays isn't made solely from live instruments. All the purists can gripe, but the majority of commercially produced songs, film scores or sound design have some elements of electronic music in them -- from synthesizers to samples. As a writer/producer, one of my favorite tricks was flipping audio in reverse and using those textures to form the background of a piece -- similar to an artist texturizing a canvas. A great example is Justin Timberlake's new song "Blue Ocean Floor," which includes vocals over a reversed piano sample. 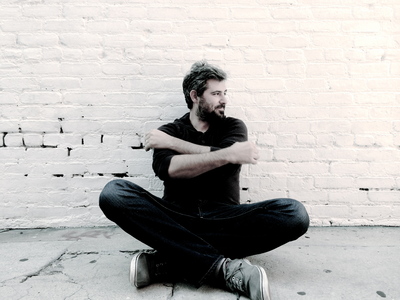 For such an obvious idea, there's never been much advancement of the process. Record it, flip it and reverse it. At least, that's Missy Elliot's / Timbaland's take. And that works, but it's also very limiting if you want to dive into melodies, chord progressions or creating complex sound design. JT, for example, couldn't perform "Blue Ocean Floor" without a prerecorded backing track. So, the idea came to build a software instrument based entirely on reverse sounds. What we ended up with is a new concept and so most people have no idea what to expect, which is the beauty of it. It's been super organic but all of a sudden we have endorsers like Paul McCartney's producer David Kahne and the composer behind The Chronicles of Narnia and Shrek -- Harry Gregson-Williams. It's called REV by Output.

You write a ton of music for TV and film. What are you currently working on?

It's been a busy year! I just finished writing the music for Bill Lawrence's [Scrubs, Cougar Town] new television show, Ground Floor, as well as the Spike Lee-produced film Girl Is In Trouble. Besides that, I've had music in the 2014 Super Bowl, American Idol, The Daily Show with Jon Stewart, Saturday Night Live and the video game League Of Legends.

I'm also called in every now and again to help create a score for a film's theatrical trailer campaign. It's exciting because you're the first one to work on the music and so you often help define the sound of the film before it ever hits the edit room. Examples of my work include Inglorious Basterds, Avatar, 127 Hours, The Avengers, and most recently Darren Aronofsky's upcoming thriller Noah.

You began your career working for legendary composer Hans Zimmer (Lion King, The Dark Knight Rises, Inception). What was that like?

Well, we all have those stories of trying to "break in" to the business and I'm no exception. It literally took showing up at composers studios and saying I was there for a meeting that didn't exist, just to be noticed. Some times it worked, sometimes it didn't. One day while living in New York, a lead turned into an interview with Hans' team and so I jumped on a plane and showed up in Santa Monica a few hours later willing and eager... it had actually worked!

As for the job itself, it was exciting, terrifying, humbling -- all the things you might imagine working for such an icon. It was my first professional job and so like most recent grads, I went in thinking I knew it all and found out quickly that I knew nothing. Lots of hard work and little sleep, but where else can you be in a room with Steven Spielberg on your first week at the job?

Funny enough, Hans' whole team wore sneakers to distinguish the sounds of his loafers so that they knew when he was walking around -- of course, on my first day, I wore formal shoes and was berated.