Alan Kaufman, the Bronx-born son of a French-Jewish Holocaust survivor and a recovering alcoholic with 23 years of sobriety, is author of the critically acclaimed memoirs Jew Boy and Drunken Angel and a novel, Matches, based upon his experiences as a former Israeli combat soldier. Kaufman has also edited three ground-breaking anthologies: The Outlaw Bible of American Poetry, The Outlaw Bible Of American Literature (Co-edited with Barney Rosset) and The Outlaw Bible Of American Essays. Kaufman's writings, like his anthologies, are subversive articulations of extreme outsiderness and existentially affirm marginality as an experience common to the contemporary human condition. At the heart of his work lies the belief that all of human society's ills, from the post-war era to the present -- and including numerous genocides, from Cambodia to Rwanda -- lies in its failure to meaningfully confront and address the implications and horrors of what occurred in the Holocaust. His books have earned the admiring praise of writers as diverse as Hubert Selby Jr., David Mamet, Dave Eggers and Jim Feast. Kaufman is also a fierce foe of the corporation, particularly as it has impacted both book culture and university education. He has authored essays attacking the corporate destruction of book culture and has led widely publicized strikes championing both poets and debt-crushed university students. He is presently the dean of The Free University of San Francisco, an anti-corporate, money-free university-level school which he founded in 2010 with Green Party vice-presidential candidate Matt Gonzalez and which the NY Times has likened to the Freedom Schools of the Civil Rights era. Kaufman is co-founder, with photographer and historian Clayton Patterson of The Acker Awards, an annual tribute given to outstanding members of the Avant Garde. 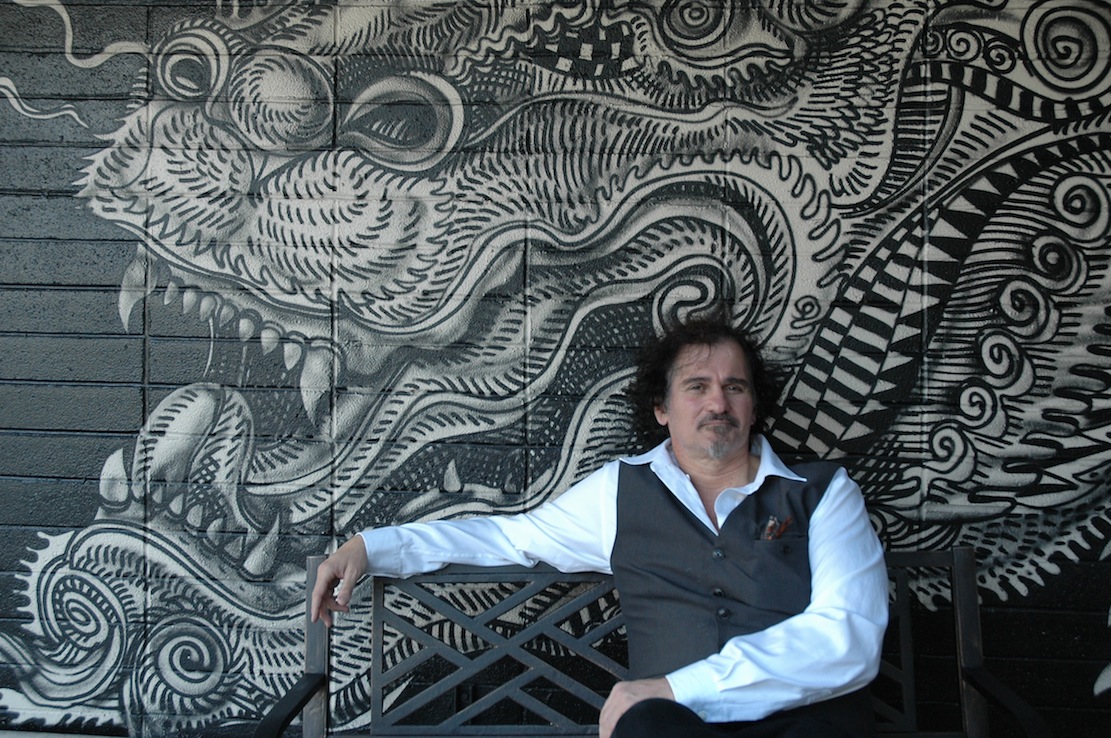 Lisa Chau: How do you delineate between low, middle and highbrow literature? Please describe the current landscape of literature and how we got here.


Alan Kaufman: Our most celebrated writers confirm their elitist audiences in bland visions of Lake Woebegone conformity and are treated both with winking chumminess and solemn gravitas by NPR and the NY Times -- each themselves unerringly middlebrow. How did we come to be ruled by this coterie of small-mindedness? They have risked nothing, have little of vital importance to say. As Faulkner portrayed such types in his Nobel Prize speech, "His griefs grieve, upon no universal bones, leaving no scars. He writes not of the heart but of the glands." I believe that the work of writers and writing is to chance life, exalt the heart and if I understand Camus and Orwell correctly, when possible to point the way to the liberation of humanity. The current crop of mainstream stars only point the way to HBO.


Alan Kaufman: Roberto Bolaño, unfortunately now gone, in his Cortezarian tour de force 2666, about the slaughter of the malquiadoras women in Juarez; William T. Volmann in his symphonic novel, Central Europe; Iris Chang in The Rape of Nanking, a non-fiction masterpiece about rape and genocide that cost her her life. The novelist Sapphire, in her books American Dream and Push. Jonathan Littell in The Kindly Ones -- a much assailed work but that looks evil squarely in the face.

LC: Why did you decide to work with Barney Rosset and Fred Jordan on the publication of your memoir, Jew Boy?


Alan Kaufman: When Fred Jordan and then Barney Rosset expressed interest in publishing Jew Boy in hardcover and then paperback, my decision was instantly yes, which pissed off my agent. I had known of them even as a teenager in the Bronx. I accepted lower advances and shrugged off protests that their imprints were not, say, Time-Warner, which, by the way, later published my novel Matches: an experience akin in feeling-tone to being signed by Burger King. Barney and Fred spoke to my deepest sense of literature as an undertaking of cultural and esthetic risk, and political courage. Barney's imprint, Foxrock, in which Jew Boy appeared, published a small but select list: Samuel Beckett, Margarite Duras, Kenzburo Oe, Maurice Gerodias, a few others. Also, Fred Jordan had published Spiegelman's Maus and is himself a Holocaust survivor.

LC: Will the film version of Jew Boy be a completely faithful translation of your book?


Alan Kaufman: Film, like literary translation, is lovely and sexy but also by nature infidelitous. Michael Sladek of Plug Ugly Films and Chris Talbot's Silent Five Productions have teamed up and Michael will direct. He is presently working on the screenplay so it's still a long way from the theaters. I would say that they will make the Jew Boy film faithful to its essence but in their own way, which is as it should be.

LC: What is the difference between Jew Boy and Maus?


Alan Kaufman: Maus recreates, brilliantly, Art's parent's' survival of the Holocaust and only touches tangentially on him. But in Jew Boy, the hyper-nuanced focus is solely on the impact of the Holocaust on me as a survivor's son -- something which had never before been laid bare with such a degree of frankness or accuracy.


Alan Kaufman: The 2G term is Melvin Jules Bukiet's, who assembled the groundbreaking Norton anthology Nothing Makes You Free -- 30 writers, including myself, to succeed the first generation of Holocaust writers: Elie Wiesel, Primo Levi, Tadeus Borowski, Yehiel De-Nur (who wrote under the nom de plume Ka-Tzetnik) and others. Our ranks include Art Spiegelman, Thane Rosenbaum, Carl Friedman, Eva Hoffman, Alain Finkielkraut, Savyon Liebrecht: Jews from America, Israel, Europe, elsewhere, whose parents or grandparents were Holocaust survivors -- survivor defined as a Jew who was in Hitler's Europe any time in the years 1933-45 and chose to write about it. One cannot imagine the monumental importance of the task or the sheer difficulty of succeeding.


Alan Kaufman: Elie drove home to me that, contrary to being an endpoint in mass murder, the Holocaust was a precedent sure to recur by improved means unless carefully monitored. Clearly he was right, for today Israel's six million Jews face possible annihilation from Iranian nuclear weapons and no one seems to give a damn about it any more than they did about Hitler's murder of six million Jews. IB Singer impressed upon me the importance, at all costs, of choosing life over death.

Alan Kaufman: Babel and Borowski are stylists of shocking metaphoric concision and intense ironic witness. Their books, Red Cavalry and This Way To The Gas, Ladies And Gentleman I carry with me at all times. Jew Boy, Matches, and Drunken Angel all bear their direct imprint. Lanzmann in his documentary Shoah affirmed my sense of the crushing civilizational amnesia that has settled over the tortured bones of one million Jewish children and five million innocent gassed, shot or incinerated Jewish adults. Samuel Beckett, who was in the French Resistance, by the way, taught me that when you're in the last bloody ditch there's nothing left but to sing. All four address life in extremis which I too attempt to do.

LC: What kind of personal obstacles did you have to overcome to write Drunken Angel? What was Jim Brody's involvement?

Alan Kaufman: The actual writing of Drunken Angel just poured out over a year into a memoiristic blow by blow account, described by others as 'harrowing' -- of what it was like to descend drunk into the gutter and then my journey back from hell. But it's about my ascent as a writer. Of once-dead dreams miraculously revived and realized. And the journey out really began when I was crashing on a park bench in Tompkin Square Park and there met the poet Jim Brody, who was famous and yet dying squalidly of AIDS and heroin addiction. He was the first to tell me about recovery. "You don't belong in the streets," he told me. "Save yourself." He died. I lived.

LC: Please tell me about your collaborations with Allen Ginsberg, and your recent co-curation of The Allen Ginsberg Festival for The Contemporary Jewish Museum of San Francisco.

Alan Kaufman: The Beat Generation was largely the invention of Allen Ginsberg, whom I'd read with and known -- a movement less of literary ideas than of friends. When the Contemporary Jewish Museum decided to exhibit Allen's photos, I was brought in to co-curate the festival and held a series of panels called 'Beat Reunion' where Ginsberg's friends and Beat aficionados celebrated and remembered him before a giant turn-out of old Beats and young admirers... And for a moment it was as if the Beat generation was alive in the room.


Alan Kaufman: I featured Donald Goines and Iceberg Slim in The Outlaw Bible of American Literature, an anthology I co-edited with Barney Rosset. They were at one time the most popular Black authors in America, and yet today they remain largely unknown except to incarcerated populations or those living in the hood. The literary establishment has denied them, despite that they wrote with authenticity and genius. Likewise for Hubert Selby Jr., who died relatively forgotten. His Last Exit to Brooklyn is the most important novel of the post-war era -- a book whose language bleeds almost biblical truth. Yet, one does not see a New American Library edition of his collected novels because his work, like Passolini's films, are too disturbingly true. The same for a poet like Sylvia Plath. Her poem Daddy -- one can't imagine how shocking that was to its time. Writers like these reach a career point where they have no choice but to say the unsayable, the forbidden, as the only way to survive. They become Outlaws. Today, Michelle Tea, a young San Francisco author, is raising Queer literature to new heights but remains in a grotto of pretty marginalization. She deserves a Pulitzer. Such writers express what is true for them, no matter how raw or unacceptable, or the possible impact on their career.

LC: How do you define avant garde? What and whom do you regard as Avant Garde today?

Alan Kaufman: Avant garde art and literature are anticipations of massive esthetic, social and political changes to come. Today's avant garde, driven by vision, defies convention esthetically, socially, professionally. It's works are prophesies. It is comprised of perhaps a few hundred or so persons, mainly in New York and San Francisco but also in Boston, Baltimore, Pittsbugh -- a loose assemblage of senior veterans and a young guard, many with roots in Beat, Ab Ex, Dada, punk and political activism, many who know each other. They produce, for the most part independent works esthetically vetted by talented peers and which do not reach wide audiences. To honor their work and elevate their profiles, Clayton Patterson and I created The Acker Awards, named for novelist Kathy Acker, an exemplary avant gardist. We held awards ceremonies in NY and SF, and the turnouts in both cities were overflow. One sensed that the avant garde is dancing. It drew the two avant garde centers closer. For a full list of these avant gardists, ranging over all the arts, one can go to www.ackerawards.com.