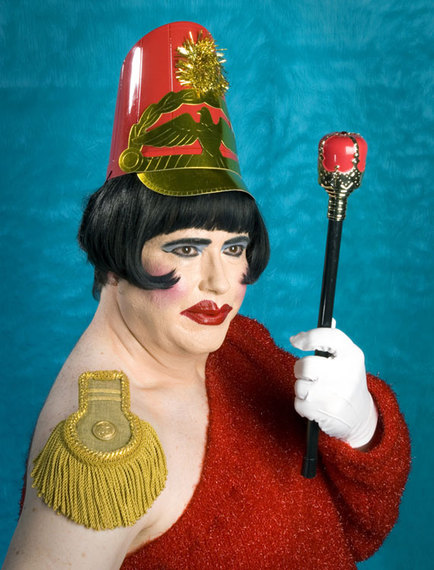 There are some artists that defy definition by being so fiercely original that any attempt to classify them winds up being reductive, and then there is Dina Martina. For more than 25 years, Dina has been delighting audiences around the country with her profoundly unique performances, causing such luminaries as John Waters to remark that, "Dina Martina goes way beyond drag into some new kind of twisted art." Whether she is recreating television commercials or covering obscure Neil Diamond songs, there is no mistaking Dina's art for anyone else's.

Since Dina is a fully realized individual, I thought it prudent to use this interview not just as a way to really get to know her, but also as means to get her insights about the some of the biggest news stories of 2014. As we all begin our march through this (still relatively) new year, who better to reflect on 2014's goings-on than this well-seasoned "former child prodigy?"

With so many years of performing under your belt(s), where do you look to draw inspiration for new material?

I'm inspired by so many people: Colonel Sanders, Fatty Arbuckle, Bigfoot, Ke$ha (I know she doesn't spell her name with a dollar sign anymore, but I couldn't find a cents sign). Sometimes I'm inspired by Shakespeare too; he used to do shows. I'm also inspired by my dreams. Last night I dreamed I was a wet nurse at the Olive Garden, and instead of mother's milk I produced creamy Alfredo sauce.

Do you have any pre-show rituals that really help get your motor running?

I usually try to eat some Lipton California Onion Dip before I go on. It's so important to eat a diet that's rich in sodium.

What was it that first brought Dina Martina to the stage?

When I was four, my mother entered me into the Little Miss Las Vegas Pageant and I won. Things really took off from there and I started doing a lot of commercials. Baby shampoo commercials, cereal commercials - mostly breakfast cereals - and I was also the original Johnson's Thumbtacks girl. Then when I was a teenager I got into modeling, mostly for the Braille edition of Vogue.

Singing is a major aspect of your live show - at what point did you realize that you had such a vocal gift?

Well I've enjoyed my singing since I was born, but I realized that pretty much everyone else loved it too, during the talent round of the Little Miss Las Vegas Pageant, when I sang a lovely piece by Beethoven. That's when everyone started calling me "The Pipe," referring to my golden pipes.

What is your favorite part of being a performer?

Oh man, where do I start? Show Business has more fringe bennies than you can shake a thing at. You get to hang with Industry and Brass, you know, it's all luxury pavilions and celebrity pleasure domes, chauffeured PT Cruisers, V.I.P. receptions with balloon animals, swag bags with prime rib, men who always wear cummerbunds, iceberg wedges and Cold Duck...it's pretty dolce. Plus, I love me some smoke and mirrors. 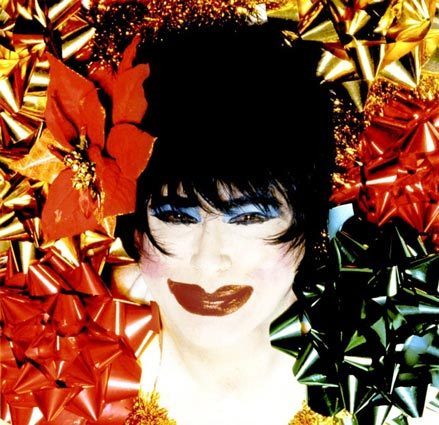 Now on to some global and domestic politics. What do you make about this year's kerfuffle surrounding "Obamacare"?

Not much; I don't pay attention to kerfuffles until they become donnybrooks.

Pretty recently, several hundred people around the country were aware that there was a Midterm election. The democrats lost their majority, and it looks like the entire South is now what highly educated political analysts would refer to as, "red." What do you think about this apparent cultural shift?

I really empathize with the Democrats, because I remember when I lost my majority, in the back seat of a '75 Pacer, and my south was pretty red, too.

Any thoughts on the recent hacking of Sony?
I hate it. I've always loved Sony and Cher.

I was referring to the hacking of Sony Pictures and the subsequent release of tons of their "classified" information.

Oh. Well see, that's why I don't like computers and stuff. I mean, I realize that the Internet can be a wonderful resource and all, but boy, TV never gave us problems like this...'member? You could watch Miami Vice or Mr. Belvedere 'til the cows came home and you never needed a password and North Korea had to actually sit through Hollywood's movies to find out who Hollywood's minimally talented actresses were, just like the rest of us. Boy, those were the days.

The latest food trend sweeping the nation is sticking to foods that are gluten-free. Are you a fan of gluten, and if so, does this movement feel a bit like a personal affront to your epicurean preferences?

I am a fan of gluten, thank you for asking. But when I was little, we couldn't afford it on account of my mother being the sole breadwinner (my father died in childbirth) so gluten was something of a delicacy in my youth. I was pretty much raised on an old family recipe of raisins, butter and Crisco (in a bowl) until I started bringing in money too, which augmented my mother's income, and at that point we were able to start having things like gluten with Karo syrup, gluten loaf and baby back gluten. Since then, I've developed quite a taste for it.

Former child star and current Santa Claus warrior Kirk Cameron recently released his film Kirk Cameron's Saving Christmas, which has an unbelievable 0% rating on RottenTomatoes.com. As an annual celebrator of the holiday, what about Christmas do you think needs saving?

Games played on cellphones (such as Flappy Bird, the sixth most searched term on Google last year), are taking over the free time of adults and children alike. What would your ideal phone-based game be?

It would be a game where the player who figured out how to be removed from the ValPak Coupon mailing list would win a million billion trillion dollars.

Finally, with only about two years to go until our next Presidential election, who would Dina Martina like to see elected to the highest office in the land?

That's a tough one. Definitely not Rachael Ray or Pitbull, but possibly my friend Doreen...or Lyndon Baines Johnson, if he were still alive, because he had the same initials as Little Baby Jesus. 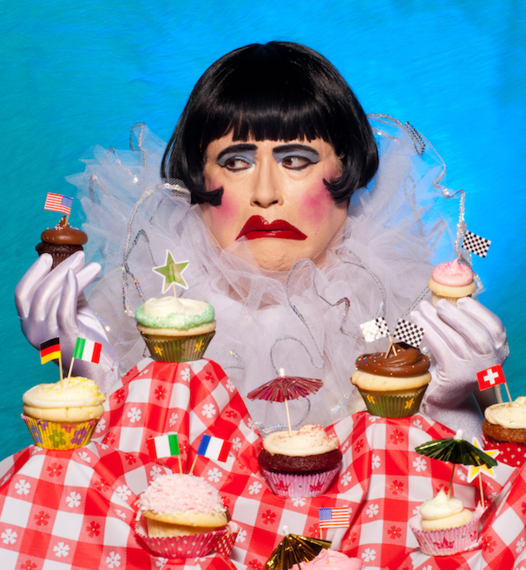