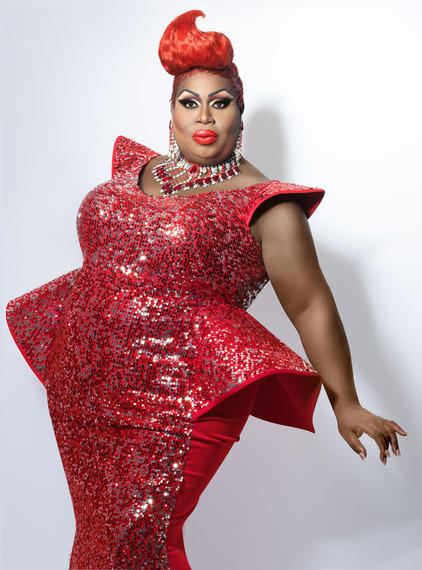 Of all the queens to come out of RuPaul's Drag Race, there are very few as universally loved and revered as Latrice Royale. We're now three seasons past Latrice's run on the show, and the three casts of queens to come after her have only made Latrice shine even more. Longevity is key in the drag world, and it is incredibly clear that audiences around the country and world will get to experience Latrice Royale for many more years to come. She is large and in charge, chunky yet funky, and also incredibly generous, funny, and kind (none of which rhymes with anything that well but are all still very true). I caught up with Latrice during some of her very rare free time to chat about what's new in her life and her thoughts on the past and future of drag.

You were born in Los Angeles, but your drag career began in Florida. What was it like the first time you brought Latrice Royale back to your hometown?

It was really amazing, because my whole adult life was branched off in Florida, so I had only really been in Los Angeles as a teenager. Coming back and getting all the love and seeing this whole other life that I had never even seen or knew existed when I was here, because I was too young, was amazing. It felt like I had come full-circle; I had to leave home to get famous to come back home and actually be worth a damn. It was fabulous, and it's why I try to get back to L.A. at least once or twice a year. It's always a huge deal, and I love that. People really come out to see me and support me when I'm back, so it's pretty awesome.

What do you think is the key to your continued success?

The key really is to be a smart businessperson. That is the key. You have to make smart business decisions, and you have to really know how to market yourself, how to strike when the iron is hot, and how to pick your battles. Also, you always have to remain humble. That sounds cliché, but bitch, I am humble pie, and I will always remain that way, because I see what the other side of that gets you, and that's not where I want to be.

In terms of onstage performance, who are some of your favorite queens to see?

I'm from the old school, and I love a queen that really makes you feel, whether it's an emotion or you're losing your shit and screaming and hollering because they are turning the party and you can't even contain yourself. That's the kind of queen I really connect with, because that's the kind of queen I am. So my favorite queens to watch perform -- I like to see Sasha Colby, I love to see Kennedy Davenport, I love to see Chevelle Brooks. These are some pageant girls, but sorry 'bout it!

Do you think being a big girl in the drag world makes your job harder or easier?

It's definitely challenging. It's a challenge for several reasons. The obvious reason is that, as a big girl, you aren't going to find the same clothes and opportunities with shoes and designs that you would for a smaller girl, so that's the biggest hurdle. But once you get over the hurdle (like me, ha!), you then get another obstacle, because it gets expensive to get shit made that's worth a damn. So we have a joke, you know: "It costs a lot of money to look this cheap!" 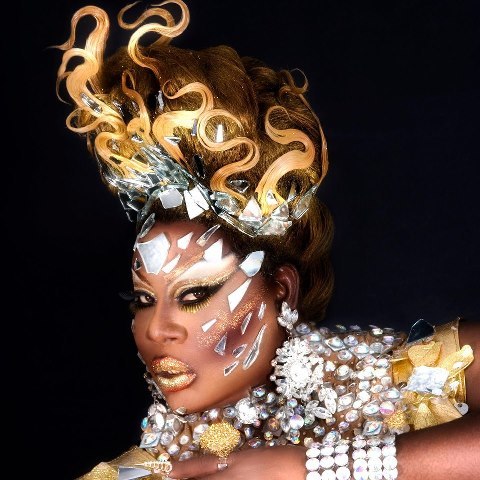 Florida does not exactly have a reputation as being a very open-minded state, but it is the place you call home. Do you find the audiences there to be any different from the audiences in, say, New York City?

Oh, absolutely. There's really only one place at home where every time I perform, it's absolutely phenomenal, and that's the Palace. It's in South Beach, right on Ocean Drive, and that's my absolute favorite place to perform when I'm home, because the audience there is so diverse. You get everything from little babies being carried around to old ladies with their walkers, and they're all there to have a good time enjoying the drag show and watching us cut up. It's different in the sense that when I travel everywhere else, it's a big to-do, but at home, you're never a profit in your own town.

Over the past few years, people, especially on the Internet, have gotten really touchy about things being "offensive." Have you ever had to deal with backlash over something you said in an interview or onstage, and if so, how did you deal with it?

I did get a lot of questions and eyebrows raised when I said what I did about the term "gay marriage." People were kind of like, "What does she mean? Does she not support gay marriage?" I had to be very specific in what I was trying to say, which is that I wholeheartedly believe in gay marriage; I just don't agree with it being called "gay marriage." I would prefer it be called something else. That's all that is! I said what I said, and I stand by it, because I still believe that. I mean, bitch, I'm ordained! Hello, I'm marrying gay folks all the time! Of course I believe in it. It means a lot to me to be able to do that and is really something I stand for. Sometimes you have to open up your mind and think outside the box. I can have those two feelings at the same time, you know?

The queer community has a tendency to focus on our differences rather than on our similarities, further splitting apart a group already made to feel separate from the "mainstream." Where do you think that comes from?

It stems from our reading and shade throwing that we do out of fun, but obviously we go to extremes and take that to the limit. Now it has become such an issue because there are so many different types of LGBT/queer community members. You can't love one group more than another group; it's all about trying to stand for a greater cause, which is equality for all. Here we are as a community, bickering amongst ourselves, while we have -- we're gonna call them "the straights" -- looking at us like, "Well, bitch, they don't even have it together. They don't even know what they want to be called, and they're all fighting about the 'T' word." What's that?! How can anyone take us seriously when we aren't taking ourselves seriously? We need to figure out what's important and what's not. There are bigger things, and bigger fish to fry; we gotta get our priorities straight as a community. That's what I'm trying to do. I'm trying to let it be known that we don't have to divide! We can be diverse, but we do not have to divide. There is strength in numbers, and if we can get all together, we can make change happen faster than we are now. We're doing this stuff so slowly because everybody isn't on board!

In addition to bringing the house down with your performances onstage, you officiate weddings! What has been the best part of that experience for you?

It has really changed my whole outlook on the marriage situation. Never in my life was it even a consideration for me to be married, because it was always to be between a man and a woman, and I knew that I was never going to be with a woman, so that was not an option. To see that I am living in this day and age where not only is it legal but I am in a position to make it happen, to officiate and actually be a part of this huge movement in history, it's just amazing for me. To see and experience the families, the two sides coming together, and it not being a "gay" issue is incredible. It's about two loving souls that are coming together and want to promise and make a commitment about their love for each other in front of their loved ones, and that is just the ultimate for me. I get to sit and have dinner with Grandma and Memaw and Pop Pop; it's all so full of love. It really opened my eyes. I'm very inspired by it.

I just caught your cameo on this week's episode of Drag Race, which was hilarious! Who are some of the queens you're keeping your eye on this season? 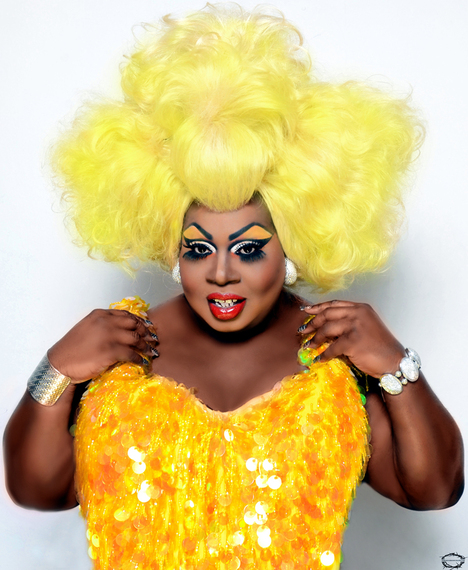 Drag, like culture in general, is always in a constant state of change. Especially looking at the Internet now, people are able to find inspiration (and makeup tips) from places that 20 years ago did not exist as resources. What do you think the biggest change in drag culture has been since you started performing?

Really the biggest change is this whole Internet wave of drag, which is cute for a taste but not for a swallow. What the Internet is producing is a bunch of pretty drag queens with no talent. If painting your face was the talent, then we would all be out of jobs! There is a lot more to being a drag queen than painting a pretty face. That is not going to hold the audience, and that is not going to make people scream and yell for you. It makes for about 10 or 15 good seconds when you first walk out, and then what after that? That's the biggest thing that has happened. These girls, when they're researching how to do their makeup, should also be researching how to perform. Look up Tina Turner, Aretha Franklin, Madonna. Look up the girls who have paved the way and really know how to put on a show -- Janet Jackson, Cher, all the legends that have made drag what it is. That's what we as men, as drag queens, pay homage to by doing their characters still today and making it hot and relevant. Look at Chad Michaels! That's why Chad has been in the business so long. That's why I've been in the business so long. You will not have longevity if you can't adapt and stay relevant, darling!

What has been the biggest change in your life since appearing on Drag Race?

The biggest change has been becoming an entity. I am a full corporation! I am not where I want to be yet, and I love that. Drag Race has been a goal for a lot of people's careers, and it was a goal for me too, but it was a goal as a stepping stone, for a platform, so that I can really be elevated and do what I really want to do. I am still striving for excellence, and I have goals that I'm trying to achieve, and we are well on our way. We're on our fourth year, and that says a lot for someone in my position who did not win the show. I feel like I've won, because I'm here, and I'm still relevant, and I'm still doing bigger and better things. You will always hear, as long as I have breath left in my body, from Latrice Royale. Trust and believe I'm not going anywhere!

Keep up to date with all things Latrice Royale: