The first thing to hit you when entering Nick Theobald's small studio space in Bushwick Brooklyn is the dense fragrance of honey. I met the 29 year old in this space as he prepared for his second solo exhibit, WITH HONEY FROM THE ROCK, on view at the Richard Taittinger gallery through December 12th.

Possessing water-clear eyes, pale skin, and the shaved head of a monk, he welcomed me with a glowing smile. It is the same glow that radiates from within his signature iridescent, yellow canvasses, dripped in thick layers of beeswax - his material of choice. Amid the clamor of garbage trucks and traffic noise, his studio emerges a sanctuary, backlit by early morning light, drifting with gold dust or pollen on the air. The spiritual nature of his work is at once apparent in the tranquility of his demeanor and in the harmony of this atmosphere. 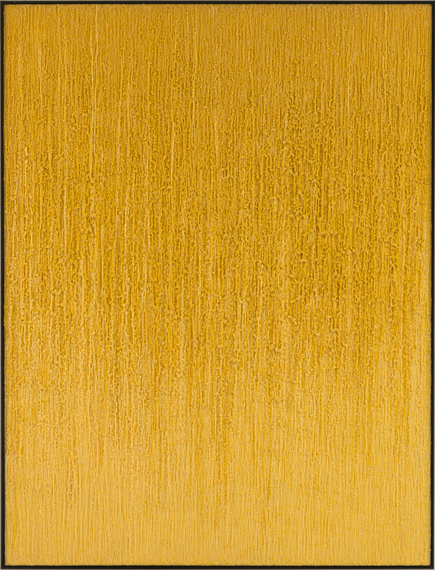 Theobald's background is an interesting one. Blue-eyed and California born, he in fact grew up throughout Japan from ages 5 to 19. It's there that he attributes the cultural and aesthetic influences that have shaped his work, and that's left him feeling a stranger in a strange land in American culture. He admits that while he possesses a passport, studied at Parsons and is currently based in New York, "It doesn't feel like home". A self-described child of the universe he explains that he "grew up in many different cultures" and recalls walking the streets of Tokyo with his mother, "the saffron robes of the monks, and the patina Buddhist temple walls" - colors visible in the palette of Honey From the Rock.

In his work, Theobald embraces boundaries indicating that, "by giving yourself no parameters and no rules, it doesn't make you more creative. Actually, by setting up boundaries and limits you're creating something more interesting." Later in our conversation he goes further to suggest that real suffering is a life without limits - a belief that goes far in illustrating his discomfort in American culture, which glorifies unbounded, pleasure-seeking consummation. It also further distances his work from the school of American art exemplified by, for instance, Jeff Koons, that delights in the excesses of capitalism.

In one series, he takes failed wax canvasses and, instead of discarding them, fashions the canvasses into sculptures, elegantly bound by rope. He relates these pieces to life indicating that achieving success "is generally this uphill battle with lots of bumps". Going on to explain:

"It's the same with the work, especially with the sculptures. It's this crude fabric and you are twisting and trying to make elegant. It's how we feel about our own lives. We're very critical of ourselves. You want to look good to the world. It's no different than the sculptures. They are frustrated and bound". 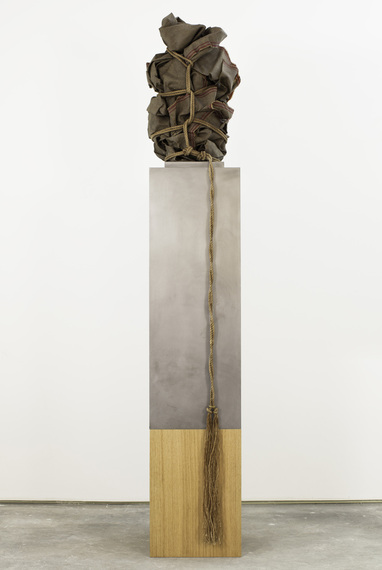 Theobald's use of natural materials and his practice of repurposing failures feel in direct dialogue with the universalism of Buddhist philosophy and the belief in rebirth. His stretched canvasses offer another example, featuring impressions of rusted metal. These imprints are made from frames that the artist used in another project. But they have since rusted. Instead of destroying the corroded metal, and abandoning the project, he used the scraps to make impressions on canvas that, in effect, recall the organization of a DNA profile , iron bars, or the cells of a bee colony. 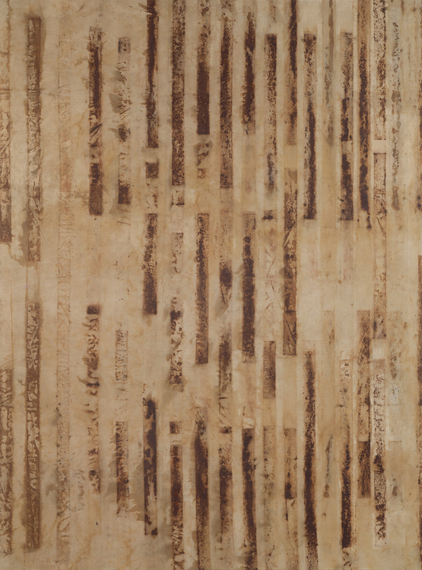 What is most striking in Theobald's work, however, is the Yin to his serene, light-loving Yang. Indeed, his work is bright, uplifting and energizing. He talks about color therapy and the positive effects of working with yellow on his outlook on life: "Before working with the wax, I use to be dressed head to toe in black". The day of our meeting in fact, he is dressed in a tope construction jacket, a yellow beany with yellow socks and tennis shoes.

Nonetheless, the darkness in his work is what feels essential. You see it in the tortured shapes of his sculptures, in the compulsive patterns and cell-like vocabulary of shapes, and in the autumnal grades of yellow and brown in the wax (produced by the diverse diet of the bees where the wax is harvested, orange tones from Marigolds, browns from buckwheat). Like the transition of autumn, death becomes vital to the process of rebirth. You can't talk about one without talking about the other.

It is the same darkness that, when he talks about submission to "something that is bigger than you" and attaining purity, when describing his relationship to his work, that also hints at a process of atonement. And begs the question - for what sins? Perhaps this is what makes his work so compelling . It speaks to a collective loss of innocence. Theobald himself speaks with great nostalgia for the past, indicating that "All of [his] art is a way for [him] to get back home to [his] childhood, to [his] first contact with beauty and nature." In this sense the work feels patently American, as influenced by a puritan guilt ethic as it may be by notions of Buddhist philosophy.

When I asked him what he hoped people took away from his work, his answer was simple:
"Being the person creating those works of art, it all becomes about the process, not [about] what you are seeing. It's my hope that what is transcribed and what you feel, is the same thing I'm feeling when I created it." As an artist whose work evokes light and dark, love and loss, what we've done wrong and the tireless effort to make it right, to start again, indeed this cycle feels complete and perpetual.