Nadeesha Godamunne is a full time in-house fashion illustrator/colorist from New Zealand now residing in Brooklyn, New York. Her voice needs to be heard. The creativity of her hands need to be seen. Say hello to Nadeesha. 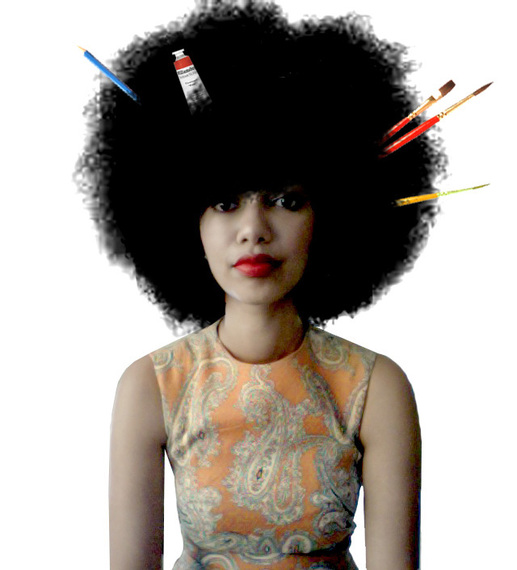 1. Tell Me Your Story!
My name is Nadeesha Godamunne, I'm a 27 year old illustrator originally from Sri Lanka. I grew up in New Zealand, and ever since I could remember, was surrounded by art supplies. My mother was a preschool teacher and knew I had a natural talent for drawing. I drew before I could write, it was the fastest way of communicating, and the most enjoyable. Naturally, my parents kept me occupied with copious amounts of coloring books, Crayola packs and extra curricular art lessons. I was fortunate enough to have had all the tools needed to excel.

I continued to excel in the arts during high school, and took as many art related subjects as I could; graphic design, painting and art design. Though drawing was a natural part of my being, I never considered it a viable career path. It was a skill I valued, but also something I did for fun. I knew I wanted to work in the creative field, but drawing as a profession made me nervous. Its not the 80s anymore, where illustrations grace the covers of magazines and newspapers, in fact illustration today isn't the most favored form of communication, photography dominates.

I went on to do fashion design for my college degree at the Auckland University of Technology. It was another form of expression. Though I enjoyed the design process of draping, patternmaking and sewing, I kept returning to drawing, and concluded my final year with a collection that featured hand drawn garments digitally printed on shift dresses, giving the illusion of many layers of clothes. The collection won multiple prizes, including the Mittelmoda award, which allowed me to showcase in Gorizia, Italy. The Trompe L'oeil aspect certainly rekindled my love for drawing, and opened up another avenue for textile design. My mentor Linda Jones, encouraged me to pursue my Masters in illustration. It was a bizarre concept that seemed almost too self-indulgent. Two years later, I completed my postgraduate studies, and realized that drawing was my life, and there was no going back.

I was fortunate enough to have then been approached to teach fashion illustration to freshmans at the Auckland University of Technology. I did this for two years and subsequently relocated to San Francisco where I instructed at the Academy of Art University, teaching along one of my greatest inspirations, Gladys Perint Palmer. Teaching opened my eyes to the lack of visual literacy today, so giving students the confidence and ability to communicate their ideas was rewarding.

I continue to collaborate with designers and editors to push forward the potential of fashion illustration. There is definitely a resurgence today, which is uplifting. 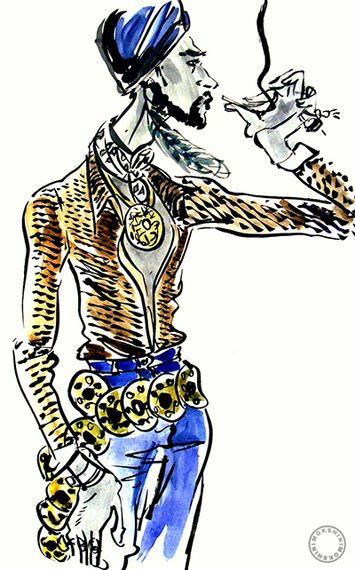 2. What is the meaning of Mokshini? Why did you decide to name your brand this?
Mokshini is my first name, and Nadeesha, my second. Though I've always been called Nadeesha, I felt it was time to nurture more of my 'true' identity. The name change has also allowed me to shift gears and think of my self as a brand, not just a freelance illustrator.

3. That is so dope to see yourself as art! Your art is very inspired by street style. Would you consider yourself a fashionista?
The term 'Fashionista' gets tossed around a lot, so I will instead say that I appreciate beautifully made clothes. The feel, drape and construction of a well-made garment are exciting to me and inspire me to draw. As a fashion illustrator one should hope I love clothes and have a keen eye for it. Taking pride in my appearance, experimenting, and expressing myself through attire, is part of my job. 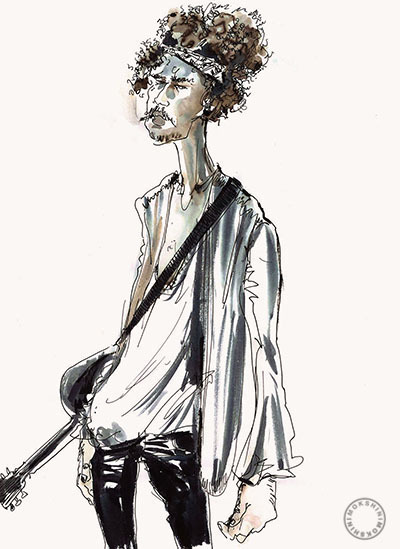 4. How is your work compatible with your personal style?
Clothes are definitely an extension of my personality, and like wise my work. I dress according to how I feel. Some days I'm flirty and girly, and play with color and print, other days, I feel dark and grungy, and sport leather and black. I enjoy serendipity, so am definitely not a planner. I'm the same way when drawing. I experiment with certain styles and mediums depending on the way I feel, and try not to let the things around me dictate me. In both the way I dress and draw being bold, confident, expressive, and quirky are common denominators.

5. Who are your true inspirations?
My mother, who is a large part of why I'm doing what I'm doing. She has always influenced and supported my yearning to draw. My mentors, from college, who continue to give me feedback and critique, and of course the great masters themselves (both traditional artists and contemporary fashion illustrators). Kenneth Paul Block, Rene Gruau, Egon Shiele, Toulouse Lautrec and Gladys Perint Palmer are a few that have influenced my body of work. I have a pin board of many of these figures drawing in their studios, a constant reminder to keep pursuing and excelling. 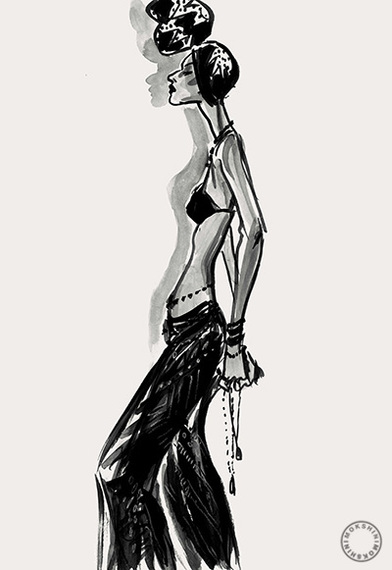 6. AfroPunk recently picked up your work and features it weekly? How has its large readership affected your work? How did you get involved with the AfroPunk community?
The response has been extremely positive; I've been receiving a lot of praise and appreciation for my art and what I do. When I illustrate a person, I feed off their energy, more so than the photograph itself, their demeanour and character is what I try to capture, not so much a likeliness. I think this interpretation is what people find captivating. The fact they are 'real' people off the streets of NYC, makes the work instantly relatable also. More importantly, there is a strong cultural element. Drawing beautiful black men and women, and capturing how they express their identity through dress, is alluring. From striking jewellery to colourful prints, its certainly been fun to illustrate. How I got involved was by reaching out to AfroPunk, who after hearing my story was interested in doing a write-up. What was a feature soon became a weekly instalment after I pitched the idea. It's been a great platform. 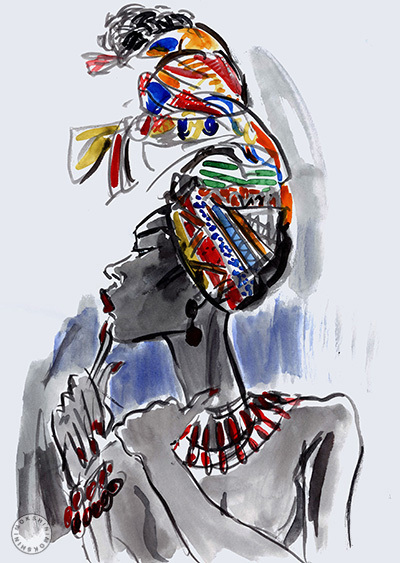 7. Humans of New York are certainly super spectacles! However, will you consider expanding your work to other major cities with an immense fashion scene? If so, which cities?
Certainly! This is a major goal of mine. I see my tag line 'New Eyes- New York' evolving to say, 'New Eyes- London' or Milan, or Paris; the major fashion capitals. I envision Mokshini evolving into a brand, where I collaborate with photographers from around the globe to capture characters I could illustrate. At its core, the drawings not only aim to capture fashionable people from different geographic locations, but also the zeitgeist in each of these countries. 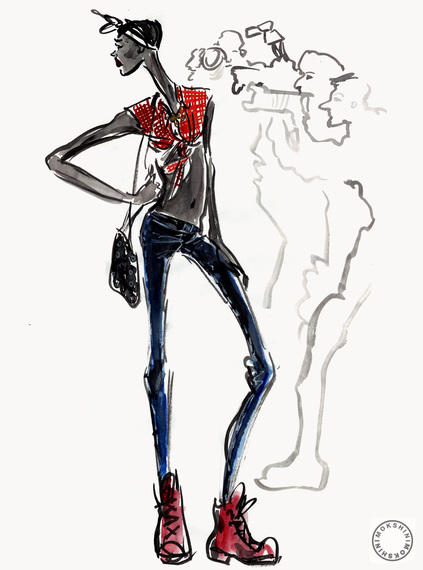 8. Where do you see yourself in the next five years?
I see myself working independently, growing Mokshini, and expanding my network of supporters. It is one thing to be a freelance illustrator, and another to create a brand, where the work comes to you. I envision a collection of prints and textiles for merchandise, and collaborations with leading brands, fashion houses and retail stores.