I visited Fred Liang at the exhibitioncut. paper. fold. to talk about his works in the show, his influences, and the limitations and intrigue of working in jianzhi or Chinese paper cutting. Liang lives and works in Boston and is the Chair of the Fine Art 2D Department at the Massachusetts College of Art and Design. 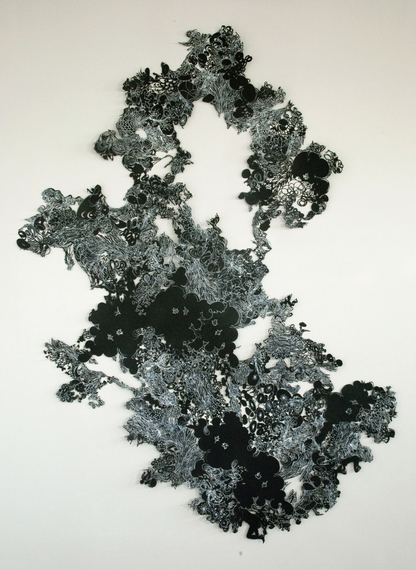 For this particular piece I thought about how there are a lot of religious paintings in western art. Chinese paintings essentially developed from that as well, from Buddhism. I thought maybe I can make a piece that's kind of like the Temptation of Christ except with Siddhartha. Like most religions of the world, it has an immaculate story and it has a temptation story. This piece, I envision as a harem of women trying to seduce Siddhartha. In the story it was Mara who tried to seduce Siddhartha out of his journey and meditation and into more of a physical world. The whole idea is that he's in this euphoric state, he's being teased and seduced, somewhat analogous to being high. I want to make this composition seem like you're in a smoking environment. 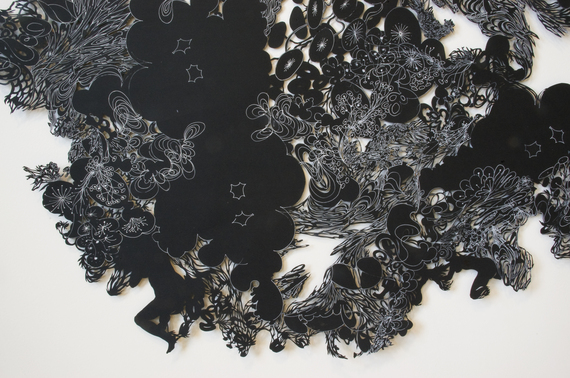 It's very seductive, it's kind of pulling you around.
And throughout, if you look closely, there are parts of bodies, female parts, and you don't know if you're imagining it or if you're looking at it. That was the initial impetus for making this piece.

Art historically, what other works inspire you?
Another source I was drawing from was Chinese scroll paintings. In the Song Dynasty there's a movement called the monumental paintings where they painted long vertical landscapes of the mountains and the scale is immense. They called them monumental paintings because they wanted nature to be the majestic thing. Within that you see these little teeny-weeny figures that coexist with nature. A lot of these works are narratives based on Taoism. What I find interesting is, when you look at landscapes, is that they're not just landscapes, they're actually about something.

And aesthetically, as an artist, it sets up a beautiful plate in terms of the scale shift. You throw this abstract thing out there and then you follow some of the strategies these artists, particularly an artist named Fan Kuan, they would play these scale shifts where they put a little house and they put detail in little branches and then, from afar it looks like a big abstraction of rocks, but when you get down to the detail, it becomes something so specific. In some ways for me, it returns to some of the Taoist poems I've read in regard to everything being relative, depending on your point of view. If you're a hawk in the sky, you see just trees as a green blanket, but if you're a rodent on the ground, you see the nitty-gritty of the dirt. The two have very different perspectives on the same thing. That's what these landscapes kind of offer, both perspectives. How do you enter? How do you see it? They give you the bigger picture and then allow you to come into it as well. It draws and teases you in. 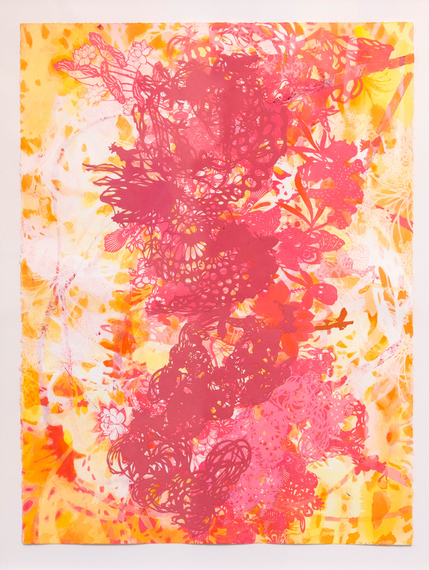 Does it matter if your inspirations and connections are apparent to the viewer?
It doesn't. Essentially it doesn't because if we look at paintings from Renaissance times, we don't know half of the story they're telling but we still are kind of enamored of the transformative reality of the work. In that sense, it kind of transforms not just the period when it was made, but it transforms time, space, context, and people. I don't think they were originally meant to be made for a pluralistic society which is what we are right now. In that sense I think it matters in my studio, in my head, and how it comes out to the viewer.

But certainly other notions of trying to draw the viewers in and have the viewers in a present state of mind and be engaged in the work, that in itself is at the heart of what we do as artists. In some ways, that parallels a lot of things in the Buddhist and Taoist way of thinking - you have to be present...which is kind of contrary to today's technology.

How was Wishing Well inspired by your recent experience in Oaxaca, Mexico?
This piece follows ideas of verticality, monumentality, and within it contains all these kinds of crazy forms. Within this kind of three-dimensional format, I try to use forms that I experience in life and things that I look at. Everything that grows in Oaxaca has this really beautiful seduction that makes you just want to touch it, but unfortunately, almost everything around has thorns and needles. Look, but don't touch. Not that I'm trying to make art like that, but in a sense, the delicacy of it kind of prevents people from going any closer.

Some of the forms were from a place called Yagul that dates back for thousands of years as a place of spiritual importance. One thing I realized - not only can you sense how old the place is, but every living thing there is thousands of years old. They have this cactus that just exudes impermanence and I thought how any footprint I'd make could not compare to that, we're just transients. Yagul and those plants are the ones laughing at us, they know we're just borrowing time, they'll still be there later. 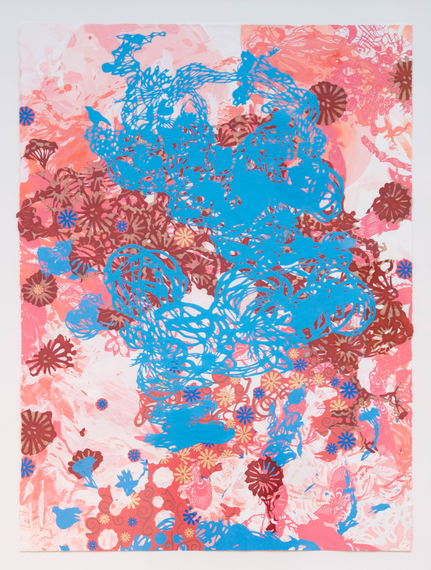 Much of your work is rooted in the traditional Chinese form of jianzhi. How does working in papercut differ from working on paper?
Something about papercut that's different from drawing is that when you make a drawing, the lines always demarcate between form and space. But you can't do that with papercut, because once you cut a line you eliminate the line by severing two planes. I have to think about that when I cut things. I can cut a piece of paper and think of it as just creating positive forms. Very often when I get a piece of paper, I don't have much waste. The part that falls on the floor, little bits and pieces, I use a blade and it's like the Hydra regrowing heads - it endlessly creates a new entity. It functions very differently than a pencil. With a pencil, you're activating the space. With this you physically create another two forms.

Paper itself is such malleable material. It provides infinite possibility, but also, in the way I'm using it, it's constrained by tremendous physical limitation because of the architectural aspect of it. So far the height of these pieces can be pretty enormous, but the width cannot because paper has to hold itself. That's one of the limitations I give myself at this point. 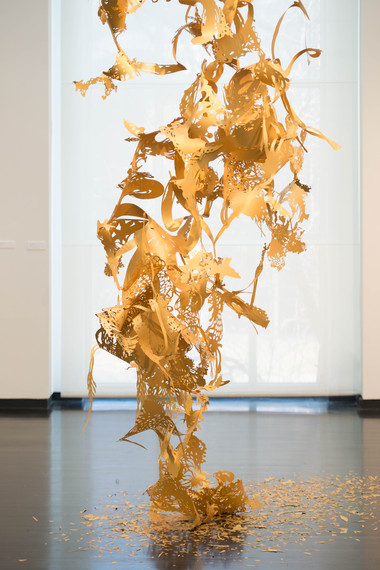 And the paper becomes so delicate when it's cut. That's another limitation.
Yeah. The nature of the work speaks about the impermanence of the thing I want to get across. Initially when I started using this paper in three-dimensional form when I was in Oaxaca and at the exhibition opening there, I had people set up, on cue, to burn it down. One of the reasons I burned it at the end is that traditionally at funerals in China, people burn money, Chinese call it jingzhi, "gold money," as offerings to the dead. Gold, during ancient times was money so I wanted to burn that. Another was the impermanence of the paper itself. You can look at a painting that's so many of hundreds of years old, but you don't look at paper like that. Even though we do have examples of fairly old paper work, paper is meant to be more temporary.

In the end, it acted exactly the way paper is supposed to. I'm okay with the fact that these things are not that permanent and also that each time I put it up, it's a different experience.

That's very consistent with the kind of thing I always think about which is being in the present. That, as a long distance cyclist, when I'm cycling, I don't use GPS to tell me where to go, I'm in the present in terms of finding my way. As an artist, just sitting there in my studio with just the most fundamental tools - blade, paper - I don't have a GPS in terms of how to get there. I just have past experience to guide me, of what I'm thinking about and the studies I've done to take me from the point of creating these forms and then later on stretching the lines into three-dimensional space. 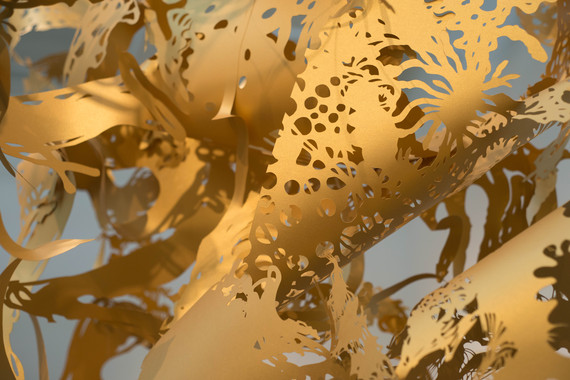 Being present is being where you are, and a lot of times your work comes out of the location where it was made. Like from Oaxaca.
When I do installations in different places, I try to incorporate something from the local culture or history. Oaxaca was a very good example of that. I brought my own paper and for the first week, nothing was working. I traveled and did sketches at different historic sites, and I finally realized that the material I was using was wrong for the location. So I went to the city to try to find new materials. Oddly I came across this gold paper and everything clicked for me, conceptually, artistically, and historically.

That region actually had a connection to China during the Ming Dynasty. In the 16th century Europeans went to that region to mine gold - and this is the kind of stuff that happens in my head, like the roads in Boston, nothing goes straight - at the time, China was the world's biggest producer of material and product. The Europeans were trying to find their way to China to trade. In the Ming Dynasty, China was the biggest in trade because of silk, tea, and ceramics. Those three things Europeans really wanted, but very quickly they ran into economic problems because China didn't want anything from Europe. The Europeans didn't produce anything the Chinese wanted. They were consumers. Sounds familiar, right? [Laughs] 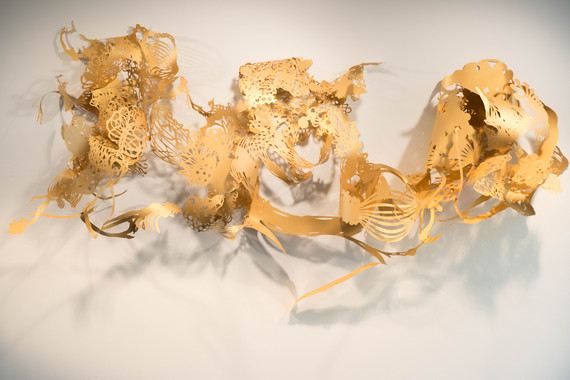 Very quickly Europeans were burning through gold and silver to try to pay for these things? Where could they get more? They discovered Central America and they were mining there for gold and silver to be shipped to a weigh station in the Philippines to then be traded with China. The Philippines became quite wealthy and the Europeans got all their goods. The only people who never got anything out of it were the indigenous Central Americans. I thought it was very appropriate for me to use this paper as a way to invoke that kind of imbalanced global commerce which still exists.

To see more of Liang's work visit www.fredliang.com and www.carrollandsons.net. cut. paper. fold. took place at the Concord Center for the Visual Arts. Liang currently has an exhibition, Cutting Edges, February 6 - May 6, at Pitch Project in Milwakuee and has an upcoming solo exhibition at Carroll and Sons in Boston, March 2 - April 16.