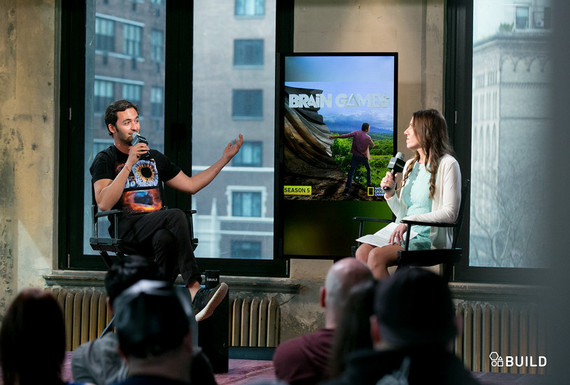 I discovered Jason Silva through my teenage daughters. They don't watch too much television, so when I would hear them getting excited each week to watch the new episode of a show called Brain Games on the National Geographic Channel, I became intrigued. As I watched the show, I started to understand, as the Emmy-nominated Brain Games series, with its charismatic host Jason Silva, is engaging, entertaining, fun, thought provoking and subversively educational. I soon discovered Jason's original video series Shots of Awe, and realized the Brain Games host has many attributes -- he is also a contemporary, modern-day philosopher, filmmaker and futurist, or as he described himself in our interview, a "media artist" "wonder junkie" who "relishes cognitive ecstasy" described by one of his friends as an "ontological DJ" "remixing reality," and "making you look at the world in a new way." As he told me, "I'm addicted to wonder."

As I experienced when I interviewed him last week for AOL BUILD, the 33 year-old Jason Silva pulsates with passion and energy, dramatically punctuating his words with his hands and body like a master conductor, especially over a topic that gets him excited, for example when during our interview he admits he "almost swallowed my microphone" when talking about "impregnating science with soulfulness." He is also apparently a walking encyclopedia, ticking off, with rapid-fire ease, speed and precision, dozens of quotes from his favorite books, research, cutting edge thinkers and TED talks. When I ask him what fuels his turbo-charged energy and passion, he answers, "The truth is it comes from an existential anxiety."

In our mind-expanding conversation, we covered a range of topics. Here are just a few highlights, and the link to the full video of our conversation is featured below.

Of Brain Games, which will be returning this summer as part of National Geographic Channel's 2015-2016 slate, Silva says, "I describe it as a pop science series that uses elaborate experiments to highlight your perceptions and misperceptions of reality... The point is to give you a sense of humility, that your daily sense of reality that you take for granted, your everyday experience of the world, is colored by your preconceptions, expectations, prejudices, cultural upbringing. All of these things inform -- in fact cloud -- your experience of reality. The brain doesn't have a direct experience of the world. The brain is behind two inches of skull... it witnesses the world through limited information it gets through the senses and it fills in the blanks... and when you fill in these blanks you are doing it with a bias, all of these variables -- cultural upbringing, stereotypes -- all of these things color your world. And so I like to think that the show uses these games to turn you on to the mystery, and make you curious, and make you wonder-struck."

As for Shots of Awe, which has earned him fans like filmmaker Ron Howard and Virgin Group founder Richard Branson, he describes that series as "trailers for the mind. It's very much a passion project of mine where I create these 3-minute films that I also narrate, about technology and our relationship with technology... how is our symbiotic relationship with these tools changing who we are... and also about the human condition, what it means to be mortal and longing to be infinite... how do we shake ourselves out of a zombified, trance state -- how do we shake ourselves out of that stupor so we can awake?"

He is passionate about giving people "doses of awe" which he believes has many benefits. "There were some scientific studies about the subject of awe... when you have the experience of such perceptual expansion, such perceptual vastness -- you have to re-accommodate yourself to create a new model of the world in the brain to assimilate that experience... it pulls you out of context so dramatically that you are forced to gawk in amazement at the ubiquitous everyday wonders you are culturally disposed to ignore." He says that the studies found, "these ecstasies, these awe-like experiences, after they pass, they leave residual feelings of increased creativity, increased well being, and increased compassion. So blowing our own minds is therapeutic -- it makes us kinder, gentler, more creative people -- that's got to be a good thing to celebrate."

Silva, who grew up in Venezuela, and whose mother was a teacher, said he realized early on the difference between "engaging, being curious, being in a state where you are learning, versus being forced to memorize a passage and being tested on it -- that never worked for me." He says that given the information revolution, "our traditional educational systems that are over 100 years old need to loosen up, let go of its rigidity, and let's upgrade and open."

When I bring up my 1994 interview with Timothy Leary, who foresaw the impact of technology to create a "new global village," Silva says the smart phone has become the "new mind expanding drug." Says Silva, "In the 1960s there was the psychedelic revolution, and this idea that we could expand our minds, expand the boundaries of what we could perceive. And that has been literalized by the computer revolution. ... Our smart phone is literally a mind-expanding substance. It allows us to transcend our limitations and our perceptions and expand our world. Instant access to all the world's knowledge and information. So that's already a shift, a transformation, potentially, in consciousness."

Asked about his understanding of the nature of reality he answers, "I think reality is a construct that we are constructing -- we are reality engineers. And so I think it's up to us to be constantly thinking about how everything we do is feeding back into who we are. We are the music makers, we are the dreamers of dreams, we are creating ourselves. We are the creators, but we are also the created."

Here is the video of our full conversation so you can experience Jason Silva for yourself:

Marianne Schnall is a widely published writer and interviewer whose writings and interviews have appeared in a variety of media outlets including O, The Oprah Magazine, Marie Claire, CNN.com, the Women's Media Center and many others. Marianne is a featured blogger at The Huffington Post, an interviewer for AOL BUILD, and a contributor to the nationally syndicated NPR radio show, 51 percent The Women's Perspective. She is also the co-founder and executive director of the women's website and non-profit organization Feminist.com, as well as the co-founder of the environmental site EcoMall.com. She is the author of Daring to Be Ourselves: Influential Women Share Insights on Courage, Happiness and Finding Your Own Voice based on her interviews with a variety of well-known women. Marianne's new book is What Will it Take to Make a Woman President? Conversations About Women, Leadership, and Power. You can visit her website at www.marianneschnall.com.