Gordon Neufeld, coauthor of Hold On to Your Kids, talks with Sil Reynolds, coauthor of Mothering & Daughtering, about the need for children to be dependent on their parents in order to become fully independent later in life.

Reynolds: There is some disagreement in the world of parenting about whether we should be holding on to our kids or letting them go. Where do you stand?

Neufeld: I started my career in parent education with the idea that we needed to let our kids go. I believed that parents were suffocating for their children. There was no room for individuality and personhood.

After I had my own children, I became familiar with and immersed in the developmental approach and attachment-based material. It was then that I realized that the opposite is true. It is a parent's responsibility to preserve the connection with their children, to preserve the relationship, so that the children can let go and become their own selves.

Reynolds: One of my favorite quotes from your book, Hold On to Your Kids, is "Our society is so topsy-turvy that we may actually come to value the child's willingness to separate more than her instincts for closeness."

Neufeld: Parents are looking for emancipation in today's world. We get so tired of our responsibilities that we confuse our children's dependence upon others with independence.

One of the things I write about in the book is that we think when children become dependent upon their peers, it means independence from us and that it's actually a sign of progress. But that's a mistake. It is not true independence.

This concern with dependence and independence has been with us for a long time. In the 1960s and 1970s, all parenting literature told us not to do anything for our child. It said they could or should do for themselves, because if they don't, they will never learn to become independent.

Reynolds: I'm interested in the way that you've brought attachment parenting clearly into adolescence, because that's when we can, as you write, "lose our children." You also write about retrieval, about how parents can retrieve that primary connection with their children when they feel they've lost it.

Neufeld: We have lost sight of nature's role in the whole process of maturation and growing up. Parents and nature are a team. And nature can't go on without the parental role of being able to foster individuality and viability unless the attachment needs are fully met. It's only as the dependencies are met that the energy can turn.

We all made a big mistake in the 1950s and 1960s when the prevailing idea that everything regarding children could be divided between nature and nurture. It was assumed that the way children turned out was either a result of genetics or it was a result of learning. But this idea eclipsed the most important factor of all, the factor that every gardener knows about -- the growth factor, the developmental factor.

It's only when a plant's attachment roots find what they are seeking that it can begin to mature and grow. And that's the whole idea about holding on to your kids. Our responsibility is to meet the attachment needs and the dependency needs of our children so they can truly begin to spontaneously emerge as viable, separate beings.

Reynolds: You have said you're committed to putting parents back into the driver's seat regarding their own children's development. How do you use developmental science to teach parents how to trust their own intuition?

Neufeld: Intuition is very interesting. We've been parenting for thousands and thousand of years, and when culture evolves it evolves in synchrony with the developmental needs of children. The wisdom is in the culture. In times past, parents never needed to know why they did something. It just felt right to do so. This happens when the culture is working properly.

The problem we face now is that when we lose our children we have nothing to evoke those natural intuitions for us. The only way of doing this is to find the words that correspond with our natural intuition. I believe good science resonates with inner intuition. I feel my role now is to find the words of developmental science that can help parents articulate what they know, but do not know that they know or don't have the words to express.

This is what I believe is needed in today's world. Our culture has come undone. It no longer supports relationships as a context for raising children. That's why words are so important. Words bring us to consciousness again and again.

Reynolds: Back in the 1960s, peer orientation was deemed important for a child's development. It was from their peers that children were supposed to, as you write, "be attached and get their cues."

Neufeld: Peer orientation is a very new phenomenon, less than 50 years old, which is quite new in the human civilization. Traditionally, children always revolved around the adults responsible for them, be they parents, teachers or grandparents.

But then they began to get their cues, values and bearings from their peers. This happened primarily after the Second World War and was the result of a number of things, such as schooling, urbanization and schools moving outside the child's village of attachment. Children became more and more separated from the adults, and in that void became attached to their peers.

Peer attachments are not the problem themselves. It's when they compete with adult attachments that the problems emerge. It's just like when siblings get attached to each other. If they start revolving around each other, then the parents can't do anything with them because it's a competing attachment. The planets are supposed to revolve around the sun, not each other. And when children start revolving around each other, it pulls them out of orbit from their parents and from their teachers, and this is the phenomenon we're seeing. Children with peer attachments that compete with parent and teacher attachments are very difficult to manage.

These children also lose the conditions that are conducive for their own development. So we have a lot of stuck-ness. True maturation isn't taking place. This phenomenon has become normal. We think that children belong with each other, that they need each other more than they need parents and teachers. It's happening with other generations, too. For example, grandparents are becoming peer-oriented. They would rather be with each other than assume their role with their grandchildren.

Reynolds: Their role as the elder.

Neufeld: Yes. Peer orientation is changing the whole structure of our society and sabotaging the context required for children to be raised. It's making it much harder for parents, and parents don't know why it is so hard, and this is certainly one of the reasons why. You really cannot deal with a child whose heart you do not have.

Neufeld and Reynolds are part of Omega's Hold On to Your Kids conference August 2-4, 2013 in Rhinebeck, New York. 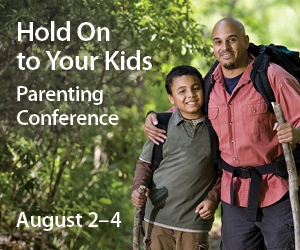 Voting Made Easy
Register to vote and apply for an absentee ballot today
Register now
More:
parenting adviceAttachment ParentingParenting Parentsmodern parenting
Newsletter Sign Up
Raise the kind of person you'd like to know
Subscribe to our parenting newsletter.
Successfully Subscribed!
Realness delivered to your inbox