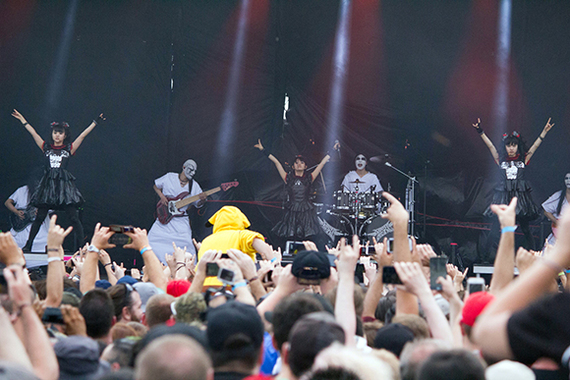 The world has been taken by storm by one of the most unique and interesting entities in the heavy metal world these past few years, BABYMETAL. With what's been coined as "kawaii-metal" ("kawaii" meaning cute), this band headed by vocalists Su-metal, Moametal, and Yuimetal takes the Japanese pop idol genre and flips the script by incorporating it over heavy metal instrumentation backed by The Kami Band. Just releasing their second album Metal Resistance this past April worldwide, the lore behind BABYMETAL's origins are as close-knit and mysterious as you can get, with the band praising their existence to a higher being known as the Fox God. BABYMETAL is like a fantastical journey where in lies beneath are songs powered by positivity and tolerance.

BABYMETAL have seldom played many concerts here in the United States just yet and after dates in Detroit, New York, Los Angeles, and Philadelphia, among a few others cities this year, I was able to catch up with the three members of BABYMETAL Su-metal, Yuimetal, and Moametal before their performance at Chicago Open Air and this is what we talked about.

When I posted on Twitter that I would be interviewing BABYMETAL, your fans went crazy offering me so much good advice and luck. How does it feel to have such a dedicated fan base?

Su-metal: Through playing so many shows now outside of Japan, what I realize the most is that there is a very diverse fan base that comes to our shows. Sometimes you see older people, younger people, kids, female, male, a lot of different demographics, people from different backgrounds as well. There are metal fans. There are pop fans. There are people that maybe love Japanese entertainment. That is why we feel that, even though metal was something that was very difficult to fathom in the beginning. It was something so different and something so difficult for people to understand, but somehow we are able to attract such a wide range of fans. We feel it's really interesting to see how our music translates to such a broad audience.

At these big concerts you do in Japan you have a "Red Night" and a "Black Night". What's the difference?

Moametal: Only the Fox God knows.

You're playing the Tokyo Dome soon. How does it feel to be playing such an amazing venue?

Yuimetal: The Tokyo Dome is a huge venue, so for us, its such a prestigious opportunity. So when we first announced the show, the Tokyo Dome show was obviously for just one night and we got a lot of people trying to apply for tickets, and that is why we added a second show. We're not sure. We're a little bit nervous. We're not sure if we'll be able to live up to everyone's expectations, but we feel that with the current team that's working BABYMETAL that we can do anything we wish.

What city has been your favorite crowd thus far?

Su-metal: It's a very difficult question because everywhere you go people are reacting differently, whether it's a festival or headline show. And again, going back to the first question where I also mentioned that our fan base is made up of so many different types of people that it always very different. One thing that I remember very vividly is their show in New York maybe two years ago at Hammerstein. New York was one of the places where I thought the crowd reaction was very interesting. It was all types of different people in the crowd all at once.

Your song "Karate" was recently featured on WWE wrestling's NXT Takeover event. Are you wrestling fans at all?

Yuimetal: I'm not very familiar with wrestling but a close friend of mine is a huge fan so sometimes I get information from them. One thing that I can say is that is an honor for us to have WWE NXT pick "Karate" as their song because its wrestling and we are doing metal. People outside of the metal scene are looking at BABYMETAL right now so it's an honor and we feel that people are really accepting our music so that's very cool.

Your Fox God hand signal means something totally different in the wrestling world. Its famously used by wrestling groups like the New Order World and now The Bullet Club as a sign of camaraderie between the members. What you seen it used in wrestling before?

All of them: (shaking their heads) No. 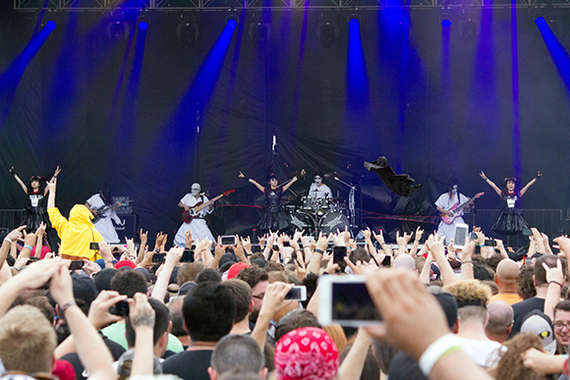 What are you thinking about when you're on stage in front of all of your fans?

Su-metal: For me, every time I step on the stage it feels like a battle is about to start. Its not like we're going on stage to fight against our audience obviously, because for me, when I go on stage, I'm always trying to reach a new level of how am I going to make today a great night for everyone that's present. Its like trying to get everybody in the crowd to be on our side to go out to the battle.

Many of your songs are about empowerment, about how young girls should feel good about themselves no matter how they look. How important is it to be role models to your fans?

Yuimetal: Of course our music has a lot of positive messages and we try to reach out to kids our age or people younger because we feel we get motivation by songs. Its really great to hear that people do look at us as role models and we hope we are able to live up to that expectation as well. We also want to strive harder to be a better BABYMETAL from now on.