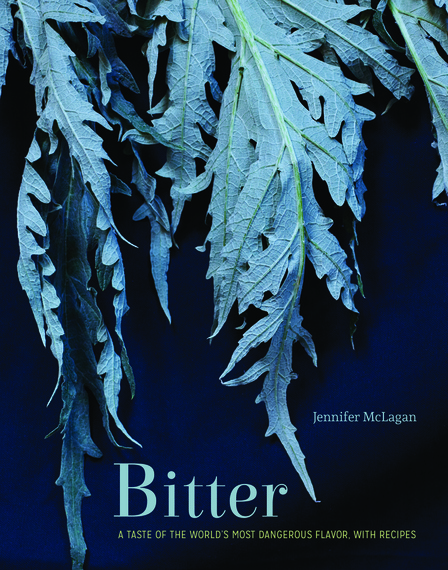 Jennifer McLagan is a renowned chef and food writer with a number of groundbreaking cookbooks under her belt, such as Fat which went on to win Cookbook of the Year from the James Beard Foundation.

Her most recent book is Bitter: A Taste of the World's Most Dangerous Flavor. It's a fabulous book for those who are familiar with cooking with this most divisive taste, and for those who are a bit more wary. It's full of researched information, pithy writing, sharp photography, and incredible recipes - essentially, it should not be missed.

I had the opportunity to chat with McLagan about her most recent book and get a better taste for Bitter. She was also kind enough to provide a recipe from her book!

Your last few books (Bones, Fat, and Odd Bits) were all focused on meat. In Bitter, you focus on produce. Why the change?

I had myself in a carnivorous box, and while I love all those bones and kidneys I eat vegetables just the same. I also think bitter is the same way as offal, it's kind of an unloved taste that needed some PR. I felt it was important to show how vital it is to cooking.

Why Bitter? You mention the other tastes, so why not salty or sour?

We were all stuck for such a long time with the four tastes. We've expanded our outlook a lot of ways in regards to other tastes such as savory, tannic, astringent, or metallic. I also think the other [tastes] had been tackled a lot of ways.

Bitter is such a fascinating thing. Get a group of people together and they can easily agree about what is sweet or salty, but vastly disagree on what constitutes as bitter.

As it goes with cookbooks there's almost always a deadline that caused a recipe to get left out or a recipe that just didn't get perfected in time. Was there a recipe you wish had made it into the book?

That's an interesting question because I like to put less and less recipes and more information in my books. It's like with the gin and tonic recipe. It uses homemade tonic, which requires some more information. It also isn't carbonated so I had to rewrite the traditional recipe.

There are also other bitter tastes in the animal kingdom that I barely had a chance to cover, such as cow bile in Filipino cooking which is used for tripe stews, or Japanese marinated cod roe.

Was there any particular recipe that gave you difficulty to develop but makes you overly proud of its inclusion in this collection?

I worked a lot on the tobacco panna cotta and truffles. I found the use of tobacco interesting and it took a lot of time to figure out the right amount of infusion to give recipes some flavor but not make it taste like an ashtray. Tobacco is interesting because it gives you that bitterness that you pick up in the back of your throat the same way a good olive oil does. One thing I found interesting was that smokers couldn't pick up the tobacco flavor as they were so used to it.

I have company coming over in a half hour. What recipe should I make from Bitter?

Well, finally, I made some recipes you can make in a half hour. *laughs* I would say a mixed bitter greens salad. It's an easy introduction for people when mixed with other sweeter greens. It's also a good palate cleanser and gets the digestive juices going.

You're obviously proud of all the recipes you put in this book, but is there one in particular that's been at the forefront of your or the public's mind?

Besides the tobacco? *laugh* I think that'll get a lot of attention, but I hope I can start a cardoon craze. I think they should be popular. It's a vegetable that needs to be brought back to people's plates.

There's a lot of cardoon recipes here such as a cardoon tagine and a warm cardoon potato salad. While cardoons can be easily foraged in many places, whereabouts should people look to find them?

Cardoons won't be found easily. In farmers' markets people should ask and inquire. Ten years ago you couldn't get radicchio. It took people to demand them of growers before they were available. They can be grown anywhere that artichokes grow and they can be foraged in a lot of places.

There's obviously a lot of research in this book. What resources did you need to consult in order to gather the information?

Well, I did go on the Internet, but I like to find two or three more sources for anything I find. I enjoy going to the library and reading sources and cited information. Sometimes I just tumble on a resource by like an article or piece of poetry. I'm a big fan of getting into a published book or getting into journals.

There's a recipe for beer jelly in this book. Beer. Jelly. Oh my God. Give me more details.

Actually, I had it in a restaurant in Paris. It goes absolutely perfect with a smoked fish. It's fun to make and it's so easy. It's just something a little different. It would even be wonderful on a cheese plate with some pickles - you just need a small taste to give some bitterness.

Tea Custard with Poached Fruit
This started off as one recipe and ended up as two. I wanted to make Tea Ice Cream (page 68) and began with a traditional custard base. When I took the mixture out of the refrigerator to churn it, I thought, why not just serve it as tea custard with poached fruit? Now, the choice of fruit is important. The tannins in the tea are strong and for that reason I think you should stay away from berries. I like to play up the tannins and match it with poached pears or apricots. When you cook apricots, they develop a tannic taste. Serving the custard cold with warm poached fruit also stimulates the trigeminal nerve, which senses the temperature of food. Poached peaches would also be a good match.

Pour the milk into a saucepan and place over medium heat. Heat until small bubbles form around the edge of the milk; remove the pan from the heat and stir in the tea leaves. Cover and leave to brew for 20 minutes. Strain the milk into a mea- suring cup, pressing on the leaves to extract all the liquid. Discard the tea leaves.

In a large bowl, whisk the egg yolks, sugar, and salt until light in color and thick, about 5 minutes. Slowly whisk in the milk. Pour the mixture into a clean pan and cook over medium heat, stirring constantly, until the mixture thickens and coats the back of a spoon. Strain the mixture into a bowl and cool quickly by placing it in a larger bowl or a sink filled with cold water and ice. Stir the mixture often. When it is cool, cover and refrigerate.

Pour the syrup into a saucepan and bring to a boil over medium heat. Add the fruit, lower the heat so the syrup barely simmers, and cook the apricots until they are just tender. Allow the fruit to cool just slightly. Serve them warm with the cold tea custard.