Louise Munson's play Luigi is being produced by Inkwell Theater this summer, opening July 18th at the VS. Theatre in Los Angeles. When Luigi, the patriarch of an Italian family, is in his last days, family members gather in Tuscany to celebrate love, life and rediscover the bonds that hold them together. Among the crowd is Luigi's young American niece, Anna, who soon discovers her uncle is the key to a world of free thinking and a familial relationship she longs for. I spoke with Munson about her new work, a story of poetry, memories and the intergenerational connection of family. 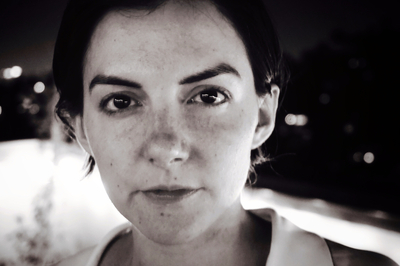 Your plays all focus on family, both the connection and disconnection of the generations. Why was it important for this play to span 3 generations of family?

This play is about a family, some who don't know each other, who gather in one place together for a week. These seven people are all trying to figure out their own mythology and how it ties into their larger family mythology. What parts of their family mythology are bullshit and which feel truthful? It's something I think everyone goes through to some extent. They're all trying to figure out how to be authentic, and this vacation together, as Luigi's health worsens, confuses things for everyone but hopefully clarifies a few things too.

I tried to capture the brief, but subtly life-altering moments that you can have when you're in a new, strange place and find yourself connecting to people who may not even speak the same language. The moments when you're on vacation, and everything is new, and you don't have your regular routine, your phone, your computer, your distractions so that the connections with other people become heightened and surreal, like a dream. Time is a funny thing, we can remember a handful of days more clearly than most other whole months, years of our lives. And, of course, in the theater, the audience along with the actors are experiencing the event of the play in real time, every night, and that's always been a fascinating and exciting thing to me. Hopefully, after the play's done, you do feel slightly altered and weirdly close not only to the characters you've come to know but to this group that you experienced the play with--even if you never talk to them.

One of the most touching relationships in the show is between Luigi, the elderly Italian poet, and Anna, his 13-year-old American niece. What drew you to write about such a non-traditional friendship?

Yeah, their story is really the heart of the play. Anna's this American teenager getting to know her extended Italian family for the first time, without knowing the language and she's also dealing with her parents divorce, and all the terrible and wonderful things being a thirteen-year-old entails. Her friendship with Luigi, who is nearing the end of his life, is one of those friendships where words aren't so important, and there's a humor and understanding they share.

Like a lot of writers, I've always been obsessed with both the experience of being a teenager, facing the complicated growing up stuff, as well as the experience of being an older man, facing decline and mortality. I didn't think about this when I wrote it, but Anna and Luigi's odd love-friendship story develops in large part because they are both preoccupied with the same things. They are both in super-intense, heightened moments of their lives. They're both thinking about death a lot, but not in a morose way (it is a comedy), and they're both sharply awake and alive to the world around them. Actually, this might explain my equal love of The Sopranos and My So-Called Life.

Luigi doesn't face mortality in the way we normally see it portrayed, he is at peace with it, and not in a phony way. The character Luigi is based on a real person, Luigi Vignolo, although the play is fictional. I'm lucky to have known him, and in writing this, I think I was attempting to capture his particular sensibility to then give it away. What I found fascinating about Luigi (the real person) is that he was a man of science, a very accomplished neurologist, yet while he was dying, he didn't want to know the details of his illness, he had absolutely no interest in the specifics. So instead of trying to control it or fixate on himself, he was at peace, and therefore able to enjoy his last years with his family, and, for me, that was a very important spiritual lesson. (Although he would never put it in that way.)

The play heavily incorporates poetry, interpreted by several characters of different ages. Why did you find this element so important in telling this story?

Anna wants to be a poet, and Luigi becomes a kind of mentor for her. He gives her permission. Every creative person needs someone in their life who basically tells them, "Hey, I'm gonna give you permission to take what you love to do seriously." No creative person hasn't had that. Without it, you don't go for it. Anna leaves Tuscany with Luigi having basically said, "Go for it." And that's his last lovely act in life. And I think he's okay with it.