Emmy winner Michael Emerson plays the conniving Ben Linus on ABC's Lost, a character everyone loves to hate. The season finale airs Wednesday, May 13th and I got a chance to chat with Emerson about the show. He lets us in on his feelings about his character, making time for his wife and huge Lost fan (actress Carrie Preston, who plays Arlene Fowler on HBO's True Blood and played Ben's mother in a flashback on Lost) and a sneak peek at the explosive season finale. 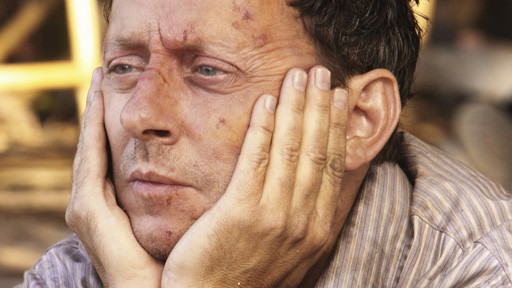 What do you think makes him so popular? People just love to hate him.

I think because he, I don't know. He stimulates the audience. They're intrigued and annoyed. He just sort of goads the audience a little bit. In a good way. And I think people like mysteries, and they like ambiguity.

You spend a lot of time covered in fake blood.

How strenuous is this role to play?

Well, it's more physical than I ever dreamt. I mean, I thought I had reached an age where I wouldn't be doing combat anymore. I was going to be one of those old codgers. The heavy lifting I would be doing dramatically would be cigarette holders and martinis. Of course, none of that's worked out and now here I am rolling around in the jungle, fighting and shooting. I feel naked on the show if I'm not covered with bruises and dried blood. 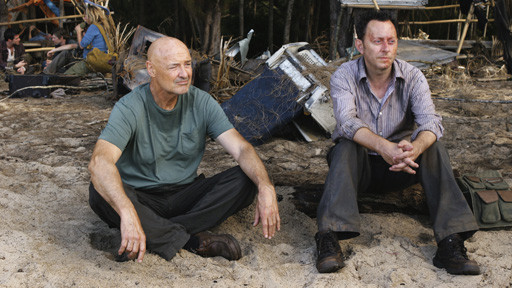 (laughs) So you want to play a character who spends the day in the spa now?

(laughs) Yeah! It would be nice. I mean, I did enjoy those episodes early in the season where I was sort of modern and cleaned up and sort of looked like an espionage guy. Those were kind of fun.

I know you do a ton of theater so you must have done a ton of stage combat.

Yeah, I have. I'm actually good at that stuff.

Are you doing any shows coming up?

No, there's never really time during the summer to do a play. Even if there was, it would mean that I was stuck somewhere and I wouldn't be able to spend time with Carrie. We're separated enough during the long filming season. I feel like summertime should be about me making time to be where she is.

Yeah, I like to follow her around during the summer. You know, hold her coat and fetch her a drink. Be her personal assistant.

Were you a fan of the show before you got involved?

Yeah, but I can't confess...I wasn't a religious fan. Not like Carrie was. Carrie was, you know, shut up and get out of the room with the phone because I'm watching Lost. She was religious about it. And I would sort of check out every other episode and I would look at it and I would mock it. And she would shush me and rewind. (laughs) And so she was very delighted when I got a part on the show, although I think she felt in her heart that I didn't deserve it. (laughs)

So when you're going through the storyline, do you go back to Carrie to break it down for you?

No, I'm completely caught up on the show. I mean, as much as I can hold in my head. But I find that I do get confused, you know? Everyone that watches the show seems to know the episodes by their titles. And all I know is the one where I got hit in the head with a paddle. (laughs) I sort of go by the physical landmarks in the performance.

Well, that could describe quite a few episodes!

How far ahead do you know the storyline? How many scripts forward do you see from what you're filming?

I know the finale...

Oh, you know the whole thing?

And the series finale?

I haven't a clue. 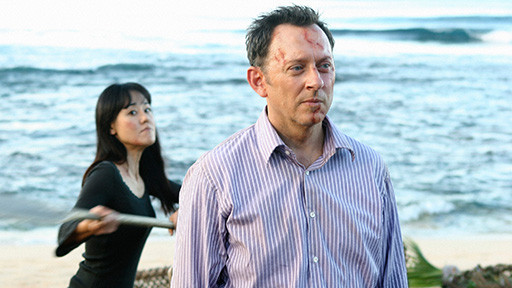 Do you have theories?

You know, I used to have some serious theories, but they were ill thought out and juvenile. The ending I see now is going to be almost beyond my imagination. And based on the events in this finale next week, I'm struggling to figure out what the show even is starting next season.

So tell me as much as you can about next week!

Well, we're just leading up to a kind of big climax, like we do every year. Except this year, it will be doubly powerful. We have two sets of heroes. Both of them are on quite dangerous and desperate missions, the outcome of which has the potential to completely upset the landscape of the story. To change it in ways that I don't know how we come back from. So that's why I said, I can't even guess what the show will be like when we start the 6th season. If I'm even in it. But I will certainly be greedy if I am, to read that first script. To see where we landed.

So you don't know if you're coming back?

Well, I don't think anyone ever knows. Officially it's still the end of the summer. I mean in strictly legal or contract terms, you don't get picked up until...I mean, it's not for sure until you get the network pick up letter. But I have every hope. I think Ben is fairly deeply involved in the storyline now and it would be a shame and a terrible mystery if suddenly he disappears. I'm hopeful.

Do you have a favorite moment from all the episodes that you've filmed?

I do like that much vaunted breakfast scene. That was a nice scene. I love that scene where I stood on that cliff top with Sawyer (Josh Holloway) and looked out over the sea at the other island and we quoted Steinbeck to each other. I mean, there's been some great scenes. I think it was an amazing scene where John Locke (Terry O'Quinn) was trying to hang himself, and Ben comes in and talks him down, only to turn around and strangle him himself. That was one of the most amazing days of work that I will ever do as an actor. Not just the material, but Terry's playing of the scene that day was beyond good. I just stood, slack-jawed at his work and I could hardly continue with the scene.

I am too. We're going to have a party here. I think it's going to be jaw-dropping. I haven't seen it and, of course, there's some stuff in it that I wasn't even privy to, and certainly scenes that I didn't participate in, so it should be a heck of a thing.