Sara Zielinski recently joined Nathan Catlin for a talk about the structures he imposes in his work, his book "Animals with Insecurities," and what he is working on currently. Originally from Southern California, Nathan is a painter and printmaker based in Brooklyn. 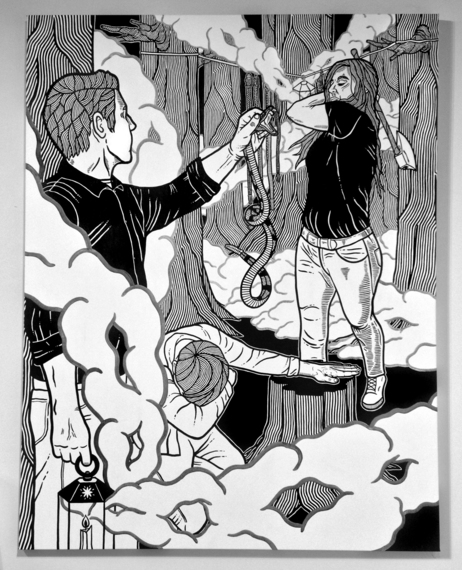 I want to talk to you about world-building. An ongoing series of your work explores a set of characters living under different conditions created by you that are very specific.
They're all based in reality. By saying that I mean, they're kind of mystical and theatrical and fantastical in terms of the weird things that are happening but they all share the similarity that I want them to be real people in real time in real space. There's nothing where someone who weighs 50 pounds is lifting someone who weighs 200 pounds. If you're dragging someone, it has to look like you're stressed or straining to do it. If someone's holding someone else, what's a realistic pose?

I just did a woodcut where a girl is drinking water, she's in a boat and she's drinking the water that surrounds her. And most people think she's drinking water out of a stream, but in my reality she's drinking water out of the ocean out of desperation. So there's this openness of what people might think is happening. I like to leave it kind of open to interpretation, but I do like to leave that mystery of there is no obvious. For me, it's always been like pausing a movie in the middle of a scene and just looking at that clip, looking at that one twenty-fifth of a second and being like now what's the narrative to this? 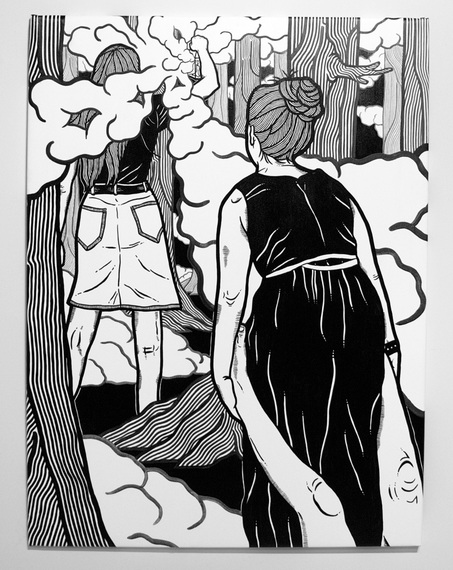 It's like a snapshot taken out of context.
Yeah, out of context. But it has to be an interesting moment. I don't want people just sitting there. If I did that, it'd be people sitting around a campfire or something, but the things around them would then create the scene. Like whatever is dead next to them would raise questions like - what did they hunt that day? What are they looking for? Why are they relaxing? If the characters were in a moment of rest, then everything around them would give a hint to what they just went through or are going to go through.

With that intentional ambiguity, do you find that people respond or interpret your work in very different ways?
The truth is, I don't talk to most people about it because I don't want to know in a way. People have said, 'this looks like this' or 'this reminds me of this,' but I'm just happy that they're thinking about it. There's no guarantee that people are going to look at your work and actually give you a moment of time to process it. When someone takes a moment to process and think about it beyond just what is there, that's enough for me, just to get someone's brain working and thinking about something outside of the reality that they exist in. 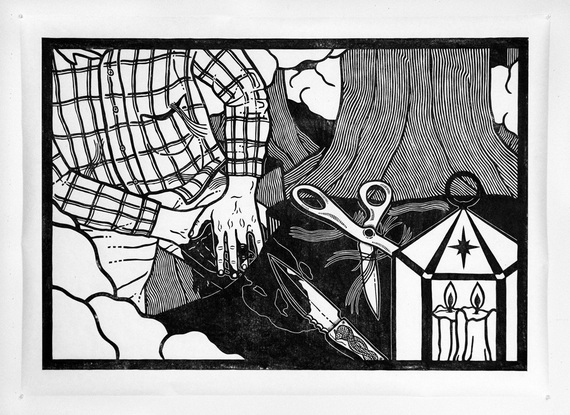 The Self-Destructive Nature of Samson, Woodcut, 2014

Both on land and at sea, it's about survival. There aren't people hanging out in a living room and everything's comfortable. That's their reality.
It's survival and human interaction. They have to survive, but it's also who you're surviving with. I'm interested in the human interaction because that's what we deal with every day. I'm trying to heighten that experience for myself. If I choose to do this, what's the ripple effect? When you get rid of the city and shopping malls and restaurants and distractions and just make it about people, you're left with the psyche of the human condition. 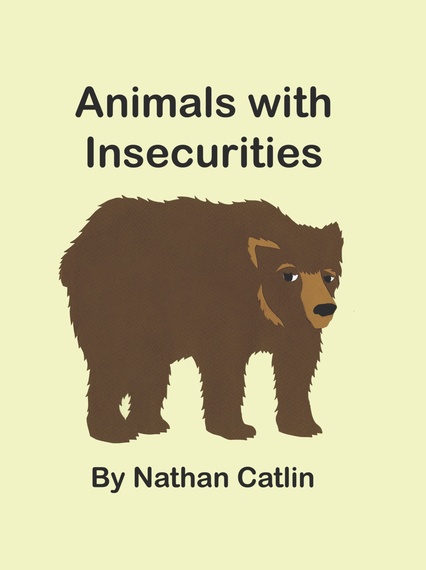 For your book, Animals with Insecurities, you imposed restrictions or parameters of a whole different nature. How did you come up with the idea for the book?
When I was 22, I was having a moment of depression, and one of my best friends, she was very sweet and she kept telling me how great I was and after her little pep talk, I sat down and I wrote a book for her. And it was a bunch of animals feeling bad about themselves, complaining about themselves and at the end it said, thank you for loving us for who we are. I made that book and I gave it to her.

I think every animal in the book has a human characteristic. I think it's funny, how dumb it is to feel bad about these things because they're all just human constructs. Like, your nose is too big, according to who? According to some fashion magazine, I guess. They're all just human constructs, we fear them or feel bad about them. So I like the idea of an animal who really has no control kind of expressing that and how silly that a bear would feel too hairy.

It was written more for adults. But I think kids nowadays, they need to understand that the reality is, they are who they are and they should enjoy that. Mostly it was for adults and for parents to read to their kids and maybe have a moment of reflection on themselves. 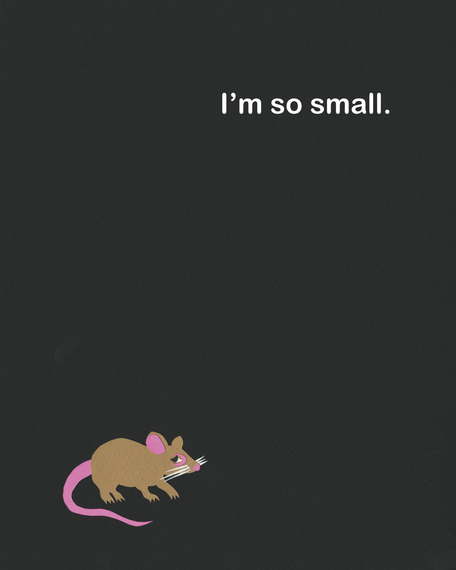 It's a very sweet idea. I imagine it being comforting to people at any age.
That's the hope. I felt bad when I wrote it and then I felt better. For me, it worked. There are some very secure people out there, but a lot of people are insecure about the smallest things and it doesn't take over their lives, but it's there, it exists. I'm sure everyone has something they want to change about themselves, but why? It just makes life difficult. So anyway, I need to embrace it too, I wrote the book but I'm sure some of those characters are me at some point. 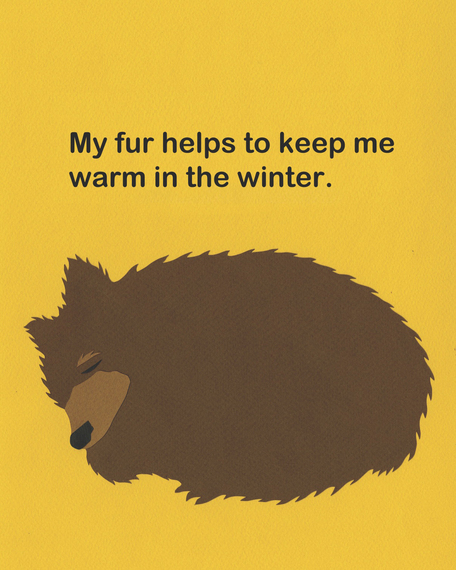 What else are you working on?
I just gessoed a new canvas in the water series. The image is going to be three people on a boat, one person up front doing some weird stuff and two people in the back whispering to each other. There's always some sense of deviousness in the work that I make. Because I don't believe in the goodness of people. No, I'm kidding. 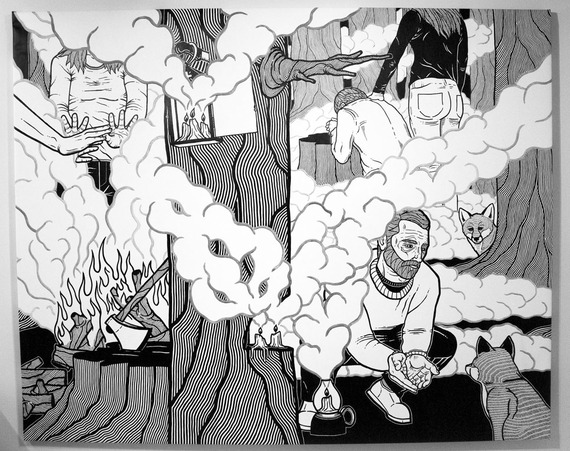 The Ways in Which We Seek, Acrylic on canvas, 2013

Sounds like you do.
I do. No, I want to, that's the difference. I want to, but it's hard when you see how bad people are to each other. I think that's what the work is about for me, the desire to hope that people are better. I made a giant painting called "Ways in Which We Seek" and it's three different scenes all happening within the same canvas of three people seeking forgiveness.

More of Nathan's work can be found at www.nathancatlin.com. Animals with Insecurities can be purchased at Strand Bookstore in New York City.