Two of my close friends Naveen Lakkur and Liz Alexander just released a book on Ideation, aptly called FOUND. Here is my interview with the two authors 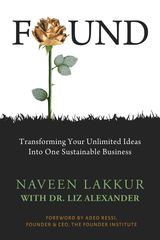 RS: One of the main messages of your book is that not every idea can or should become a commercial reality. Naveen, can you offer an example of what you mean by that?

NL: As director of the Founder Institute, Bangalore as well as a start-up investor myself, I am continually faced with enthusiastic, aspiring entrepreneurs who want to pitch their ideas to me. On one occasion when I was in the Bay Area of California, I was introduced to a young aspiring entrepreneur who was convinced he had a "winning idea" and wanted my feedback, with a view to possible investment. What he was proposing was a gadget that automatically muted the television set once the commercials came on so that the family could chat without being disturbed by the advertisement, based on his study that's when the family members interact.

Now, you've probably come to your own conclusion. Maybe it's a cool idea or on the other extreme that this idea wasn't going to fly. Not least because the companies who spend millions of dollars every year on TV advertising wouldn't take too kindly to such a gadget. Yet when we began talking, this man really believed he could create a business on the back of this idea.

What this aspiring entrepreneur appreciated was how quickly I could show that while there was value in his idea, I wouldn't recommend he try and build a business from it. Using the Rose Model validation process that's fully outlined in our book I identified that his TV gadget idea was stronger on features and functionality than providing a core solution to a sizable market pain point. However, I suggested that with sufficient novelty an idea like this might be patentable, and in that way he could claim ownership and monetize his idea eventually without necessarily having to create a company for it.

One of the reasons why Venture Capitalists and "Angels" decide not to invest in many of the ideas presented to them is because the ideator tends to focus mostly on features and functionality without thinking about whether theirs is an innovative solution addressing a big enough market problem, and has a sufficient differentiation to support an actual business.

None of which should be considered a failure by the entrepreneur. In this case, the man left our conversation feeling satisfied that I helped him save all that time, effort and money he otherwise would have spent, thinking there was a business in it.

RS: We hear all the time that there's never a shortage of ideas. Why do so few of them translate into sustainable businesses - not least ones with global impact?

NL: In the Foreword to our book, Adeo Ressi the CEO and founder of the Founder Institute estimates that of the 25,000 new technology companies founded each year, almost half will fail within the first few months. He goes on to say that, of those that do endure, less than 100 in a year will grow to have a truly global impact.

That figure equates to something like a 0.4% success rate, which is abysmal by any standards. So, you are right--there are no end of ideas, just not enough "winning" ideas that are going to contribute to job creation and economic wealth.

That is why it's so important for entrepreneurs to have a solid, proven framework to work with and that's what FOUND is all about. It's a five-part process that allows you to pick, with a high degree of certainty, the one idea that has the greatest chance of supporting a long-term business. And this is important, given how much we rely on startups for job creation in economies across the world.

RS: If not every idea can become a business, are you saying that some ideas are "bad" ideas?

NL: Not at all! We present an 'Idea Matrix' that helps readers identify where their ideas fit according to category and market stage. For example, it may be that an idea isn't going to sustain a business, but could be patented. Like the TV gadget idea mentioned earlier, it could even be a "plug-in" that fits with an existing system or product. In some cases, maybe the idea is best staying as a hobby or pastime.

Then you need to think about whether the relevance of the idea was stronger in the past than it is today; whether it's "sun raising," meaning demand is increasing, or "sun setting" and declining.

As you can see, this is a robust and disciplined process - it's not a quick fix. But it really pays off in ensuring that entrepreneurs don't waste their precious resources on ideas that aren't going to lead to the outcomes they want.

RS: Liz, how did you and Naveen "find" the winning format for your book, FOUND?

LA: FOUND is an acronym for the five part-process we went through ourselves to discover and develop the core content for the book. The work we did together is a perfect example of the FOUND process in action. Naveen and I had already collaborated on his first book, Inseparable Twins, when he came to me with five or six different ideas for another book. That relates to the initial F or "Freeflow" step of the process. Even though we had no idea that the concept in FOUND would be so timely, I had a strong intuition that this process would speak to a huge, unmet need in the market. It seemed to me that no one had crafted a book of this kind before.

I've always been passionate about ideation and so the topic fitted perfectly with my work helping aspiring thought leaders develop commercial insights, which speaks to the O or Orientation part of the process. In the same way that an entrepreneur needs to think of their relationship with their business like a marriage, both Naveen and I were totally committed to dedicating the two years we spent working on this book, in order to transform the overall idea into a commercial reality.

The U of FOUND stands for Unearth and we talk in the book how "experts" are often at a disadvantage because they make assumptions that prevents them from fully developing a concept they know only too well. What I did was take Naveen through a questioning process that provoked him to think even more deeply about the knowledge he'd amassed in fostering over 200 ideas to become fully fledged businesses.

The N for Negotiate refers to the commitments you need to seek in order to know that others believe in your idea as much as you do. We were lucky enough to interest a wide range of successful founders in sharing their experiences. As we listened to these exceptional entrepreneurs tell their stories, the overall idea behind FOUND began to coalesce.

Finally, the book could have gone in any number of different directions. But because of the rigorous groundwork and extensive interviews we did, the book's structure and shape began to emerge. It was easy enough to Decide (the final "D" of the process) how best to showcase all of Naveen's valuable intellectual property, so it could reach the widest possible audience.

RS: What if someone isn't interested in becoming an entrepreneur, Liz? What relevance does the FOUND process have in that case?

LA: The framework we present isn't only relevant to entrepreneurs. As a corporate innovation coach, Naveen works with organizations who want to boost the number of good ideas that can help them create new products and services. The same five steps apply. The only difference being that instead of looking for funding, the intrapreneur is hoping to attract sponsorship from within the business for ideas initiated by a department or team.

As I've already pointed out, the five FOUND steps were directly relevant to the way we approached writing our book. In fact, I'd suggest that anyone who wants to take an idea and change the world with it could do no better than expose themselves to the FOUND framework.

There are unlimited ideas and countless opportunities to be grasped. But only if ideators take themselves through a disciplined process, or work with an organization like the Founder Institute that helps significantly boost their chances of success. This is the way you transform yourself from being "just" a dreamer to becoming a meaningful contributor to the global economy.