Sara Zielinski recently sat down with Raul Gonzalez III to talk about the origins of his work and new directions in his work. Raul grew up in El Paso, Texas and Juarez, Mexico and is now based in Boston, MA. Raul is currently working on the sequel to his very popular graphic novel for kids, Lowriders in Space, a collaborative project with Cathy Camper. (Part I of this interview can be found here.) 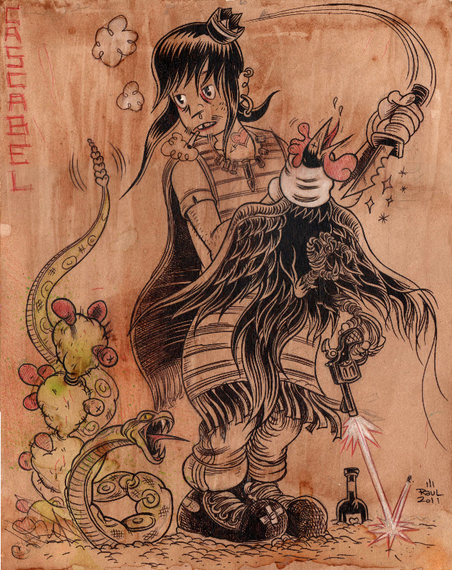 Tell me about men, women and animals in your work.
Any one of my drawings might contain elements recognizable from one to the next. I use specific techniques and icons to present a very immersive and realistic world. I love world-building. I really want the drawings to be part of one expansive and epic world.

When you enter one of my drawings, the first thing you might notice is that it feels incredibly hot. Everyone and everything including the plants, the animals and the people, are covered in sweat. The paper itself is very textured and aged because, if you set anything out in the sun for a prolonged period of time, it becomes bleached of its color, yellowed and faded. I think that's a perfect description of where I'm from. We are always affected by the heat of the powerful sun. The temperature -- 102, 104, on really hot days 112 -- affects the way we see things so there's a hallucinogenic quality to my work.

The characters, the animals are always walking towards something and that is usually very goal-oriented. The people are looking for work, for things they can do to survive, they are looking to redefine themselves, they are looking to provide for families they have left behind. Sometimes the ways that they are going to achieve these goals are very unclear to them. It's almost like that shimmering city in the horizon that you're walking towards and as soon as you get there it disappears, it wasn't really there. A lot of the people in my work are going through extreme hardships, whether it's the backbreaking labor of my relatives picking fruit, or very dangerous work such as working for the cartels, or women having to cross incredibly hot terrains with their families in tow. 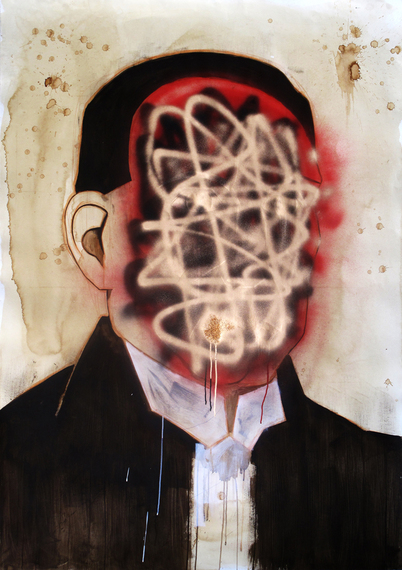 Benito Juarez, with Elaine Bay, 2012.
Above images courtesy of the artist and Carroll and Sons.

You often collaborate with your wife and fellow artist Elaine Bay. How do you approach projects differently when you're working alone versus with Elaine or another collaborator?
Well, Elaine is the love of my life. I've known Elaine for more than 20 years. There isn't a time in my life when Elaine hasn't been a major part of everything that I do. From being both my collaborator in art and now the mother of our child, we do everything together. We're both artists so we have influenced each other in many ways, unexplainable ways, for decades now. The way we collaborate is very natural. I often feel it's out of my wanting my work to have this awesome Elaine aspect to it because Elaine's work is so powerful to me and it's just so cool in how it looks.

That's how I like to collaborate. There are always people who can do certain things way better than I can. And I want to work with those people to make the best painting, comic book, poster.

What really helps a young artist survive in the art world early on is finding and joining or maybe forming a badass gang of other artists. 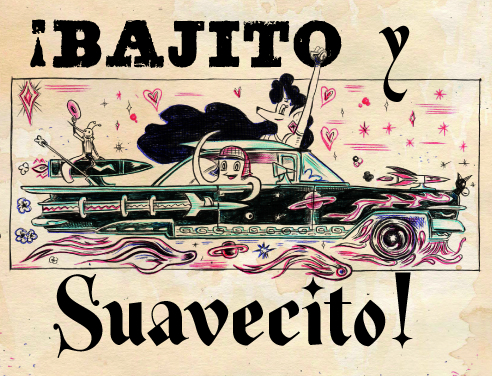 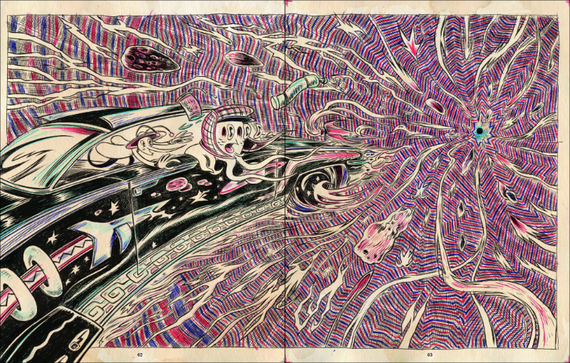 One recent and ongoing collaboration are your children's books with Cathy Camper. How did Lowriders in Space come to be?
A few years ago, Dave Kiersh, a wonderful cartoonist, was working on this graphic novel project, and he asked if I wanted to take over. I said sure. I read the script and I knew it wasn't for me. I told the author, Cathy Camper, "I love your script but I don't think I'm the person for it." She said, "Raul, I'm an outreach librarian and I go out to all of these Latino neighborhoods and I am so upset that none of the books that I can recommend to them has anything to do with their community or who they are or where they're from."

Cathy had an idea for Lowriders in Space, a story about a female mechanic named Lupe Impala who fixes the cars, a mosquito named Elirio Malaria who draws and airbrushes the cars with his beak and a little octopus named Flapjack Octopus who buffs and cleans the cars. As she was describing the story to me, I was doodling on my notebook paper with my ballpoint pens and, within an hour, I knew exactly how the book should be drawn. Three years later, the final published book ended up being almost exactly how we envisioned it originally. 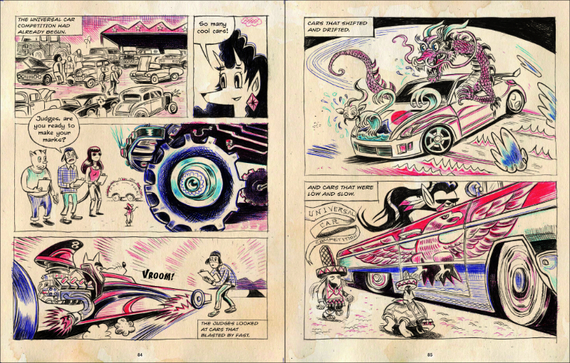 I'm curious about how your children's books and your work with more "adult" themes, with their distinct content and audiences, both operate separately and coexist in you.
First and foremost, when I was a young boy, my goal, and what I thought was going to save me from my situation in El Paso, and it was a desperate one -- I was a terrible student, flunking every single class, even typing. The only thing I felt I was good at was drawing. As a kid, I spent a lot of my time copying images from comic books. I would use the only art materials I knew about at the time, which were ballpoint pens.

Even though it's a collaborative project with Cathy Camper, I really feel that Lowriders in Spaceis an autobiography. It's an autobiographical story in that it's about me dreaming of becoming an artist in a place where that wasn't normal, growing up in a border town with no real art influence around.

I find that the book, in a way, is a predecessor to the work I'm making for galleries and museums. Because without the accessibility of the comic books that I found at the local 7-Eleven, none of what I'm doing today would have been possible. I'm so happy that I get to work on a fine art project like Lowriders in Space for an audience that might never see my fine art work. This is a gallery project for all the boys and girls that live in all the remote areas of the world. When they open up my book, they can immediately understand the materials I used to make the book.

I know there are a lot of young boys and girls out there who might not think it's possible for them to become artists, because nobody they know is an artist. They might not even have art classes in their schools, they don't know anything about art materials.

I am really drawn to the work of Jose Guadalupe Posada, because of the strength of his drawings and also because of his philosophy. He had an open door policy to his studio so he allowed kids to come in and watch him draw. Some of these kids ended up being artists like Diego Rivera and Orozco and Siquieros. This is something I try to do as well, I try to be very open and share with people as much as I can. I try to make work that is welcoming to young artists of color who might find hope in my work. 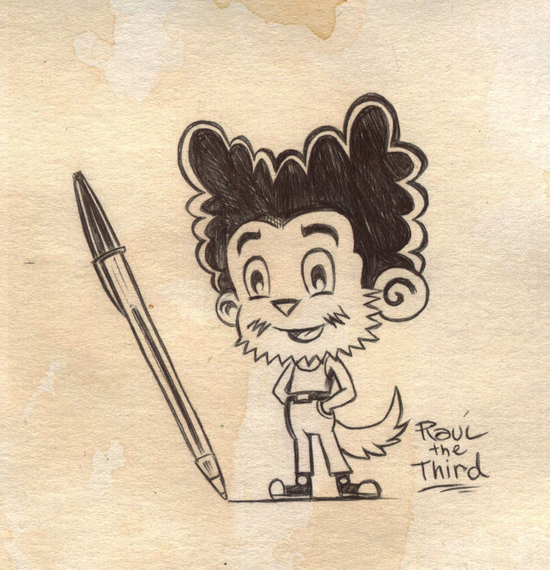 Above images courtesy of the artist and Chronicle Books.

Additional Works by Raul Gonzalez III can be found at www.artbyraul.com and www.carrollandsons.net. Lowriders in Space can be purchased through Chronicle Books or Amazon.com. Signed copies of the book are available through Porter Square Books.