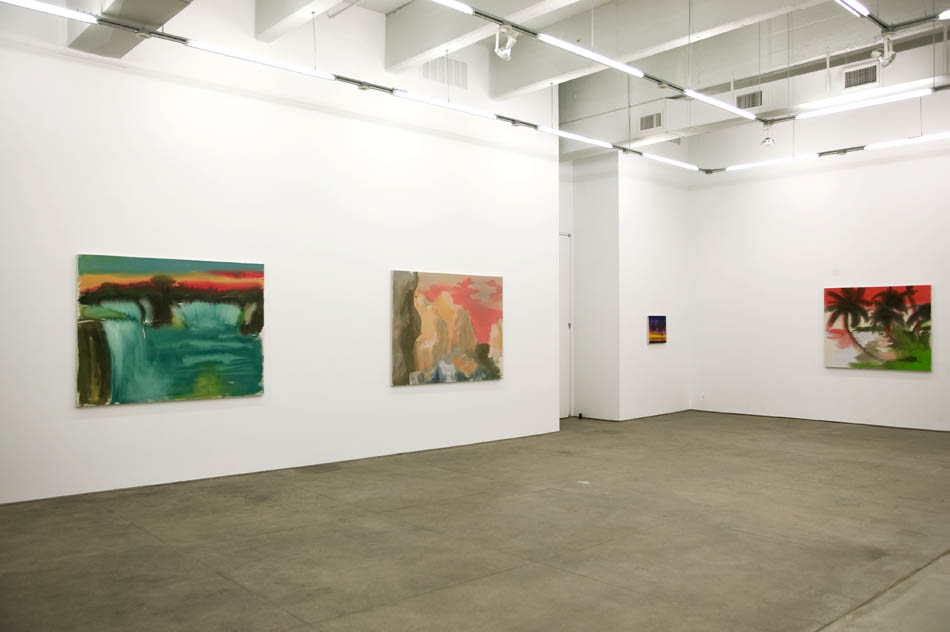 As New York began to rebuild from September 11, 2001 and move into the 21st century, a new wave of younger people became successful art dealers. Scott Zieher and Andrea Smith (now, Andrea Zieher) opened ZieherSmith in 2003 and helped lead the way, with Andrea serving as President of the influential New Art Dealers Alliance ("NADA") from 2005 to 2009. In addition to his "day job" as a prominent gallerist, Scott is an accomplished poet who cites Frank O'Hara and Ezra Pound among his role models -- "poets who championed art."

(Note: The following is an excerpt of the full interview, which is available at www.juliechaeprojects.com under the Writings tab.)

All Photos Courtesy of ZieherSmith. 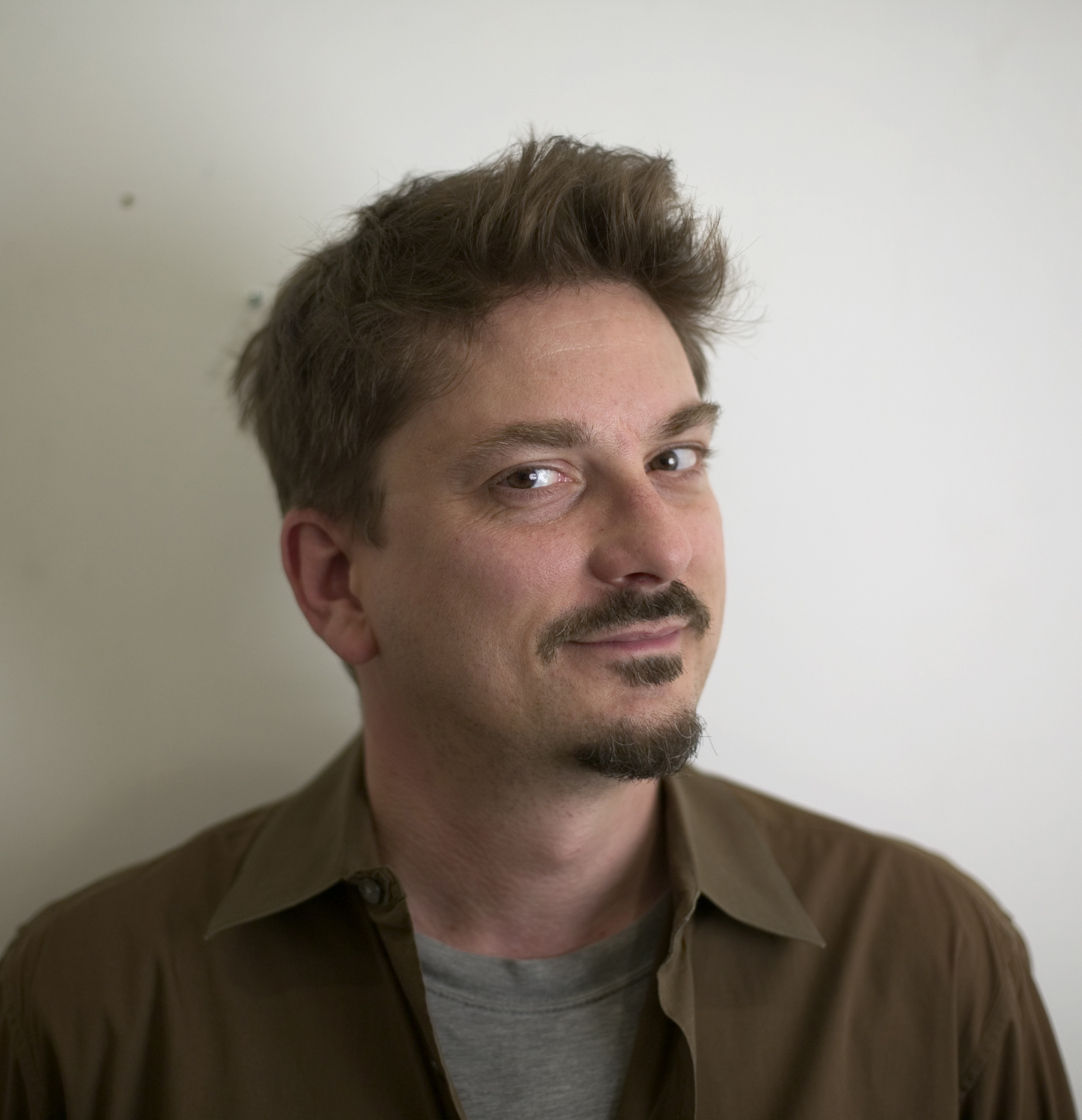 Julie Chae: Scott, how did you and Andrea decide to start your own gallery?

Scott Zieher: I had been working in midtown selling contemporary art for two years, and my (now) wife Andrea was working as a director of exhibitions uptown for an American paintings dealer, Vance Jordan. We were living in Spanish Harlem and seeing shows constantly, writing $25 online reviews. We were both more interested in emerging, younger artists, and I knew a lot of great, unrepresented artists. I started doing shows in my apartment and the work was selling, so we felt confident we'd garner broader appeal with a storefront space.

September 11th happened and really changed everything; we decided to go after our own vision. We started looking for storefront space and after a few, excruciating months of hunting, landed on a ground floor spot on West 25th Street. We were in business pretty quickly thereafter, opening on the Ides of March 2003. America went to war that day, so it seemed an auspicious start.

My memories of the beginning are very fond. My mother had passed away a couple of years earlier and I knew that she was proud of what we'd done.

JC: ZieherSmith will be celebrating its ninth anniversary next month. Any particularly special memories?

SZ: Every exhibition has a good story ... I'm fond of our recent Allison Schulnik show "Mound." We got great press and sales, and Allison is a complete joy to work with. After the opening we had dinner and she managed to get me to sing karaoke in Chinatown, a duet of Peaches & Herb's "Reunited," and she's a real pro! 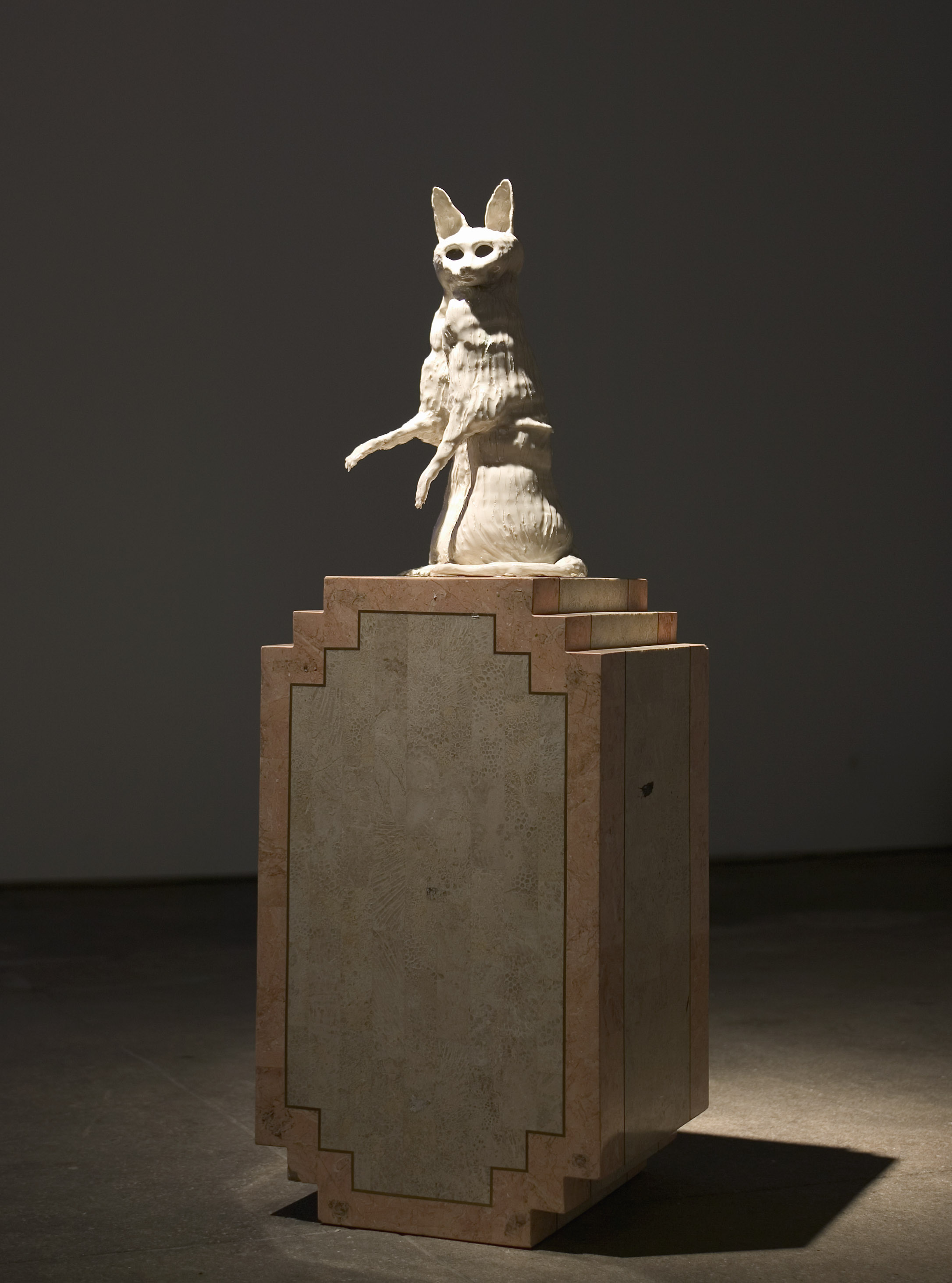 SZ: I'm also proud to have shown an extensive selection of works by Joseph Cornell for his 100th birthday in December 2004, grouped with a great crop of young artists. Cornell is a model for me, both in his singularity and his broad knowledge. 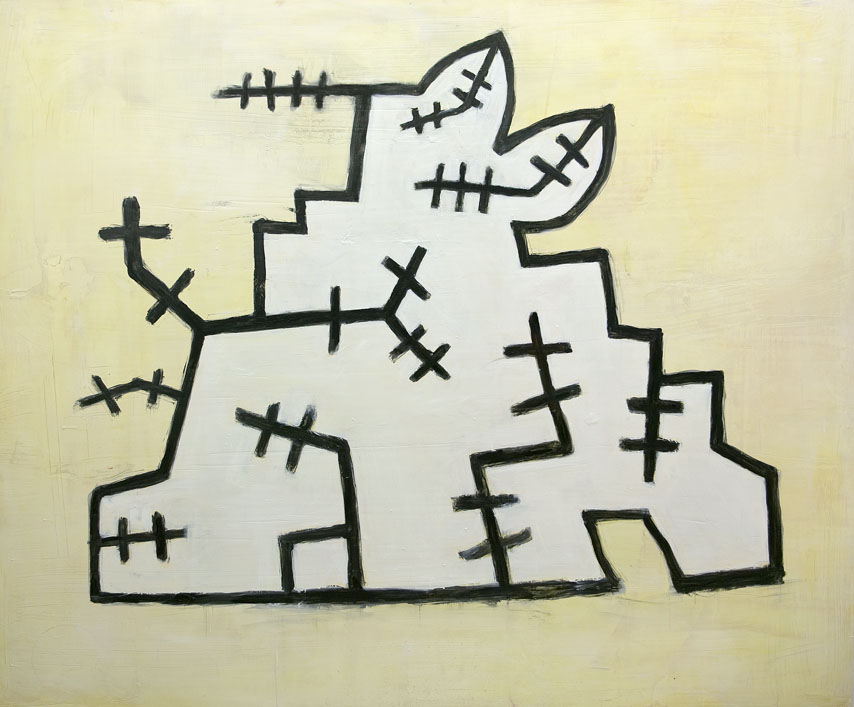 JC: During Andrea's presidency, NADA became a powerful presence in emerging art, with a full-time staff and office, a greatly expanded program of services/activities and a large annual budget. Most agree that under her leadership, the NADA Fair became second only to the main fair in prestige and importance at Miami Art Basel.

How did you start working with them? 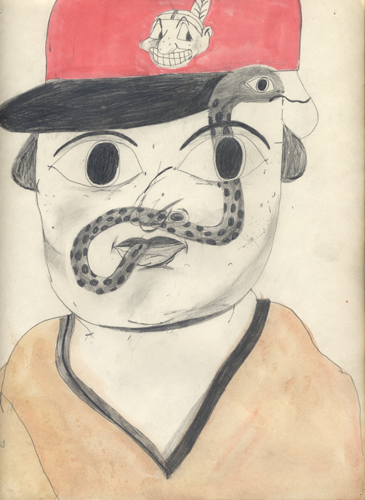 SZ: Wes Lang introduced Eddie to me at a party in Miami in 2004 (Eddie was making great, super-fast, little drawings on the beer-splattered table, Wes was the DJ). Back in New York, Eddie came to visit the gallery and we saw a lot of each other that spring. His incredible energy and imagination were infectious. We had our first solo with him shortly thereafter and the rest is very successful history.

Eddie, in a generous turn, introduced us to Liz. 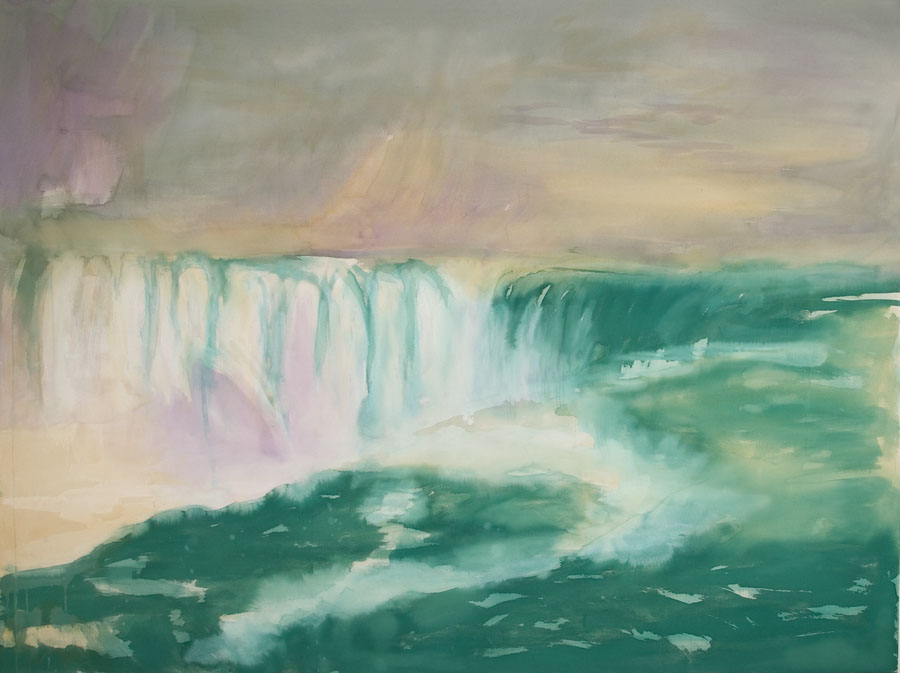 JC: What has it been like, working with them?

SZ: Both relationships are fruitful, ambitious and reciprocal. We really try to embrace as much as we can of each artist's approach to his/her practice, hopefully giving space when it's needed and offering whatever we can when it's asked for. We knew almost instantly with both artists that we'd come upon something special.

That's all you can ask for, really; to recognize the ones with great focus coupled with ambition, and to recognize staying power combined hopefully with loyalty.

JC: Back in 2007, Liz showed me the press release from her first ZieherSmith solo show and I was impressed with how you'd captured the essence of her work in a really nice way. How do you approach discussing an artist's body of work and framing the way people look at it? 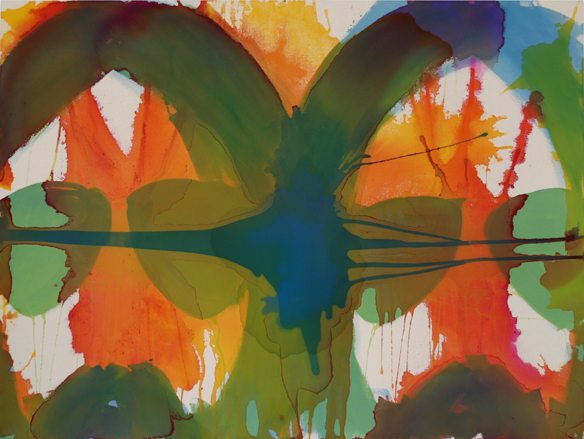 SZ: I'm always delighted and shocked when people pay attention to our press releases; they can be the only public chance we have of "framing" the works we're showing, and we try to take them seriously. Andrea is a very good, accomplished writer and a really keen editor. And I guess it's second nature to me to write about art, as I've actually been doing it for 30 years! I was really lucky to have art history classes in my high school in Wisconsin, so my ekphrastic impulse is long practiced.

Andrea typically lets me start and I improvise and gesticulate wildly for three paragraphs which she in turn carves into little ribbons of butter. It means a lot to me that people read our little 350-word expository exercises, so thank you.

JC: I so wanted to drive to Nashville for the opening of your pop-up space last summer! How much fun did you have driving down (transporting the artwork)? And why did you decide to exhibit in Nashville?

SZ: I was lucky to be driven to Nashville by Brad Hajza, a collector, advisor and great friend. We mapped the route through Pennsylvania to stop at Falling Water and then Pittsburgh for the Warhol Museum. I managed to find us the worst hotel in Columbus, Ohio; even our dog Robert was skittish. The next morning we proceeded to a marvelous chili dog lunch at Skyline in Louisville. We made good time and had a great trip.

We decided to do the pop-up because my wife's family is primarily in the vicinity and we visit there often. There's a lively scene in Nashville, and we hadn't really tapped into it, so this seemed like a very thorough way to get to know some of the people making things happen. It worked, as the local press all wrote at length about the show. We had a great turnout and hosted several events, we sold a good amount of work to local collectors who were new to us, and met a ton of artists, musicians and writers, including Dan Auerbach of the Black Keys, who stopped by more than once.

JC: Are you doing another pop-up show in Nashville this summer?

JC: You're a practicing poet. How do you find the dual energy to handle the needs and considerations of visual artists as a vocation, while working toward furthering your own creative practice?

SZ: I love artists and the processes/practices of making art. Separating my own endeavors with the artists I represent has been crucial and very natural. As the age-old adage asks the poet: "What do you do with the other 23 hours in the day?" In addition to selling art, I write every day, and I have a desk at home where I work on collages. I'll be in a group exhibition this summer at Charles Bank Gallery on the Bowery and I'm honored to publish three books this year.

It's my firm opinion that a poet who isn't constantly writing poems, or a poet who needs a pristine cabin in the woods with no distractions to create is a lazy poser. Quit sniveling, get to work. No excuses. If you truly care, you will fail until you succeed. 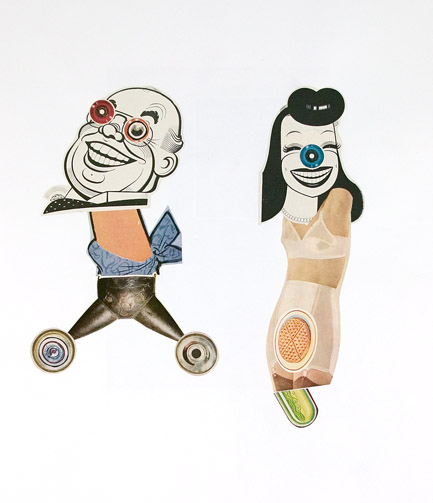 Scott Zieher is co-owner of the contemporary art gallery ZieherSmith. In 2004 he won Emergency Press' international book contest for his book-length poem, VIRGA. He has since published the following books: IMPATIENCE (Emergency Press 2009); BAND OF BIKERS (powerHouse Books 2010), his collection of found photographs from 1972; GENTRY (Emergency Press 2012), his third book-length poem and THE PORNOGRAPHERS and PORNOGRAPHIES (both: Jaded Ibis Press 2012), collaborations with novelist Christopher Grimes featuring Zieher's collages. Recent poetry has appeared in The Believer, Jubilat, KNOCK and The Iowa Review. Zieher was born in Waukesha, Wisconsin and received his MFA in poetry from Columbia University in 1996. He lives in Manhattan with his wife (and co-owner of the gallery) Andrea, their son, Tennessee and dog, Robert.
www.ziehersmith.com