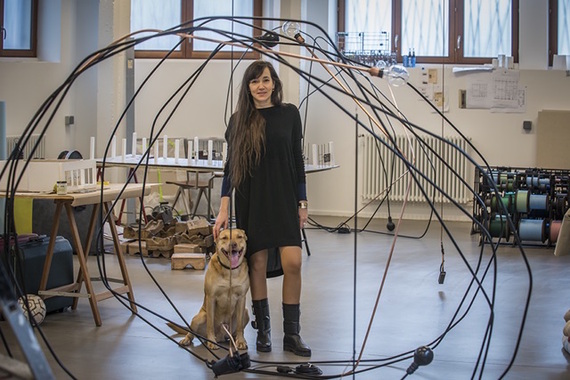 The work of Italian artist Tatiana Trouvé (1968), resident in Paris, is grounded firmly on drawing, sculpture and installations, through an inquisitive examination of concepts such as time, space and memory. Her creations and locations are like tracks left by the soul that reveal an inward-looking universe.

Her work has been exhibited at the Centre Georges Pompidou in Paris, the MAMCO in Geneva, and in galleries such as Emmanuel Perrotin and Gagosian. Trouvé has won the Marcel Duchamp Prize (2007) and has twice participated in the Venice and São Paulo biennials. Her latest work is a sculpture for a public area in the city of New York. 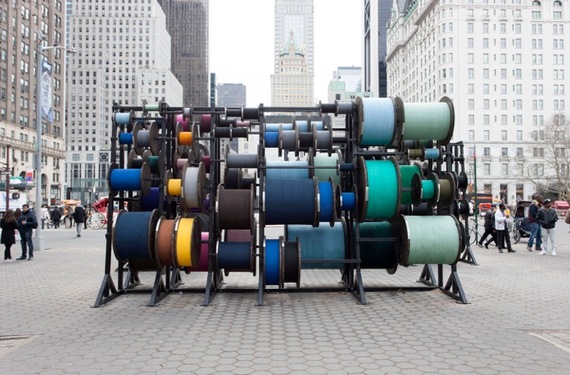 
Elena Cué: In your public commission "Desire Lines", for Central Park in New York, you created a very poetic work, envisaging a symbiosis between culture and the act of walking. The lengths of the 212 different paths around the park, like living arteries, are portrayed in huge spools of brightly coloured threads. Can you tell us about the cultural and political meaning of this work?

Tatiana Trouvé: The starting point for this work is an observation I made when studying the park and its history, but also, above all, I tapped into my own experience of this place. Central Park is a natural and cultural object, a nerve centre of trends and mobility in the very heart of a city, combining a web of heterogeneous landscapes. In this connection, it is an emblematic project of modernity. That's why I didn't want to create a work that was simply one more of the numerous sculptures that have been created in this context. As the artist Robert Smithson said, Central Park is, in itself, a sculpture. That's why I decided to establish a dialogue with the park. I created a series of routes from all the roads and paths that cross the park and are open for walking. I measured these routes and then transferred their lengths to huge spools of thread, so that adding the lengths of all 212 spools on the three large frames of which Desire Lines is comprised gives us the total length of all the roads and routes a person can walk along.

After that, firstly, I identified each spool with the description of the route they contained and the title of a historic march, the work of an artist, a writer or a song about walking to be associated with that particular route: Selma to Montgomery March (21 March 1965), Woman Suffrage Parade (3 March 1913), projects by "walking artists" like Richard Long or Hamish Fulton, poems by Baudelaire or André Breton, essays by Guy Debord or Henry D. Thoreau, songs by Johnny Cash or Robert Johnson... In other words, a set of 212 references linking each of these paths with another path -historical, imaginary, political, cultural- and providing passers-by with a proposal that would enable them to walk again, to walk differently, around the park. And this formula sums it up: "Follow in someone else's steps". The act of walking has its own, singular beauty; it is an everyday, banal action, but at the same time it is a privileged manner of protest, of awakening the senses and the spirit, which is the origin of belonging to the world in a subjective way...


Drawing is the key to most of your work. This artistic discipline extends into other works such as sculpture and installations. How important is drawing for you?

It's true that drawing occupies a fundamental place in my work. As you say, drawing is present throughout my artistic production. I draw spaces, whether in two dimensions or in three. To put it another way, my two-dimensional drawings are images of spaces and, at the same time, my three-dimensional installations build spaces that work like images. 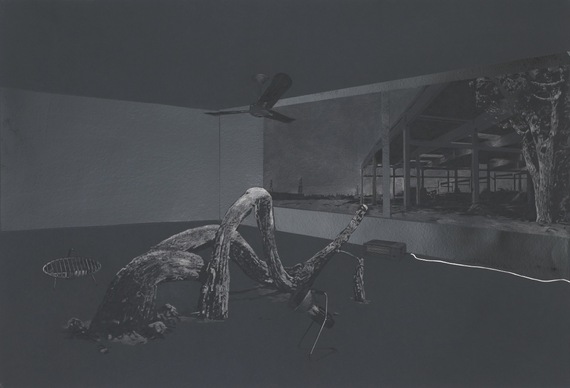 Your drawings of spatial creations are very unsettling, like "The unremembered". The metaphorical representations of places of thought take us into a dream world, a world of the unconscious. They must be a source of self-knowledge...

I complete these two elements, space and image, present in my work, with a third: remembrance. For me, drawing means making my memory work and this is unquestionably why the terms "mental image" or "unconscious" are so often used to describe my work. However, there is something about the unconscious that interests me in particular, and that is that it is timeless. In the sphere of dreams, all times coexist and are superimposed. This is a dimension I am interested in and I effectively try to give it shape in my drawings.

Why are your spatial interventions always uninhabited?

I am very fond of a quote by the Italian architect Ugo La Pietra, who says "To live is to be at home everywhere", meaning that to live is, first and foremost, a question of approach. I produced a work called The Guardian. Its title refers to a person assigned to a place on a chair. But this guardian only exists on the device where it is located: a copper rod is placed over the chair (guarding the guardian's place), and the rod pierces a concrete wall from which, on either side, small bronze and plastic bags are hung. Inside this wall there are embedded works, whose "ghosts" can be seen in the material pasted on its surface. It is an absent sentinel guarding an invisible exhibition, but it is also a device that must be inhabited by contemplation, just as the images intend. 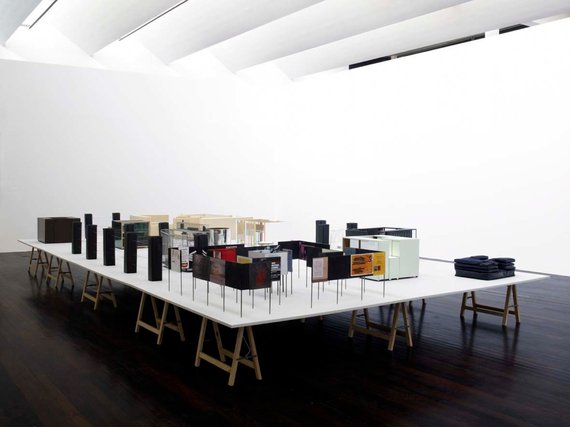 
Your work in "Bureau" is like a kind of "Remembrance of Things Past" since you created a work of art from all the time you had to waste looking for work or doing daily chores that took you away from your artistic activity. How important is the concept of time in your work?

I don't think of time in its abstract dimensions, on a scale, for example, of cosmic time and its infinite duration. I have seen time as a material of my work since I created Bureau d'Activités Implicites (Office of Implicit Activities), the first module of which I made in 1997. It's time on a human scale, a time we experience. Hence, its not so much a concept as a reality we experience in its various manifestations: time for waiting, time for searching, time for wandering. But what interests me even more is the coexistence of times. I see time as dual. The present is dual, it has two coexisting facets: the present is the past passing. I have made a series of works called I Tempi Doppi [Double Time]. Each of the works in this series comprises a lit light bulb linked by a copper wire to an unlit light bulb. The past and present feed each other, maintaining a singular relationship whereby one seeks to switch off the other, because the past is also made of present that passes. Time is dual, because it works in a dual way.

What is the most important thing art has given you?

Art has given me what I have taken from it. 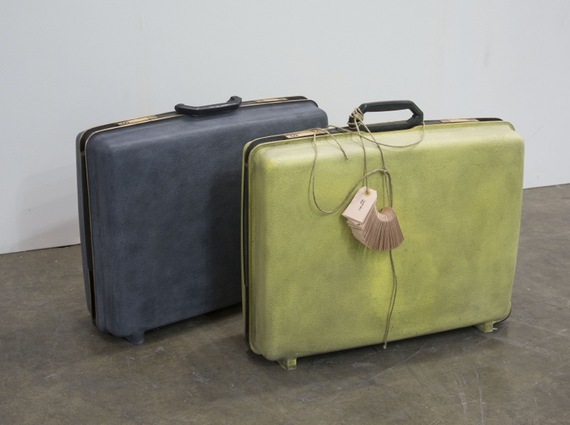 "Double Bind" is the name of your first major exhibition in Paris's Palais de Tokyo, whose title alludes to the irresolvable situation that emerges when we are faced with an intrinsically paradoxical message. What is your interest in opposites and the tension they emanate?

This title, Double Bind, responded to the spatial proposal I had devised for this exhibition at Palais de Tokyo. The tension was in the space itself -there was no psychological component, unlike the standard usage of that expression. And it was not embodied by a contradiction, but by an echoing structure that perturbs our potential understanding of it, causing a feeling of floating between one and the other. Incidentally, what interests me is not the tension itself, but what it opens up: this interstitial space-time or these inter-worlds and the floating attention they generate when we install ourselves in them.

Your work is full of meanings, and there is an interesting underlying discourse. Is the spectator's immediate aesthetic experience of your work enough, or do you think some prior knowledge is required?

We must trust those who are looking, because aesthetic experience is on their side. There are many ways to activate the potential of the works, but first and foremost you need to be constantly involved. Involvement: "perception requires involvement" is the title of a work by Antoni Muntadas, who asserts that the senses must be emphasised in order to understand a work, but also that anyone can do it using their own means. But, without that commitment, aesthetic experience is not possible. It all begins with this increase in involvement, and this is also what can lead you to research a process or a particular work. Of course, the works offer different approaches to this experience. If I take the example of Desire Lines, a small explanatory text is outlined at the start of the reproduction of the lengths of the paths in the park represented in the spools of thread. Afterwards, it is up to each person to carry on. The simplest way is by reading the titles of the spools and evoking the walks they recall, to which one may add one's own memories, considering the various complete references of the titles given to the various routes, which make the historical, cultural and political references appear more explicitly, allowing one to submerge oneself in the history of the march. But it is also possible to take a walk around the park, interpreting the present cultural and historical elements, either by reading a poem or a book, listening to a piece of music, or through the documentation on a historical march or artist's representation.

By activating each of these modes of operation, the person looking/walking will be following in the footsteps of another. To varying degrees, they will place the work in motion. Various readings are always possible, and none is imposed, but the ones that work are all based on an approach proposed by the work itself.

Through your art, are you asking questions or providing answers?

Personally, I don't think art either asks questions or provides answers. I think art bewilders; in other words, it invites us to think differently, by shifting around our references.