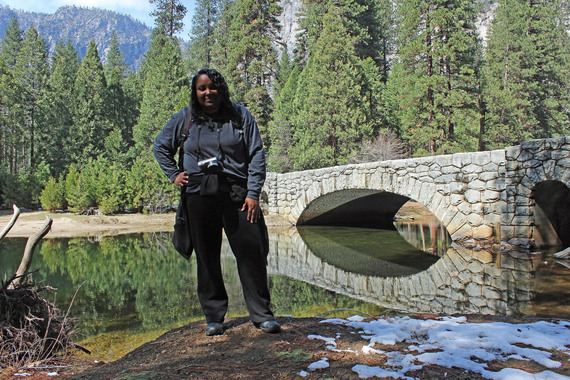 In the last two years, I've got to work with a really incredible nation-wide group headquartered in the San Francisco Bay called Outdoor Afro. One of the most inspiring people I met with Outdoor Afro is Teresa Baker. Ms. Baker organized last year's African American National Parks Event. She is also organizing an event June 7 and 8 that will trace the trail the Buffalo Soldiers took in their journey from the Presidio in San Francisco, to become park rangers at Yosemite, in coordination with this year's African American National Parks Event that will also feature a conversation with noted NPS Park Ranger, Shelton Johnson. 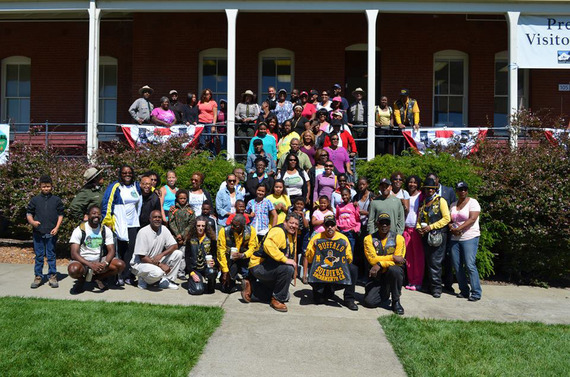 I was able to catch up with Teresa the other day to chat about the outdoors:

How did you get "in the outdoors?" Who introduced you, what keeps you coming back outside?

Growing up as the only girl in a family with eight brothers, I was determined not to be outdone. If they played football, I played football. If they went hiking, I went hiking; when the neighborhood guys went camping, I tagged along. So I guess I was introduced by my neighborhood in Richmond, C.A. I also belonged to an after school program where they would take us hiking at nearby Tilden park and to their family ranch for the summer. There was nothing around on this ranch, just nature and animals. So exploring my surroundings was just the natural thing to do. I would ride horses and hike the surrounding hills.

When I was about 13, I joined the girls club in my home town, one of our first trips was to Yosemite. Never before had I seen such beauty in nature, as I did watching the waterfalls and hiking through the giant Sequoias.

As I grew, so did my love for the outdoors. Being at one with my surroundings, knowing that nature is the one "thing" in life, that doesn't ask us for anything. Nature accepts everyone the same. No expectations, just an invitation to simply be.

How do people react to you when they hear you hike and like to go outside?

It depends on who I'm having the conversation with. With my family and friends, they know my love for the outdoors. When I come across people out on the trails and we strike up a conversation, most of the time I have my camera with me and I get the typical "Did you get any good shots," but then there's the occasional conversation about how brave of me to hike alone, as a woman, or "Don't be offended, but I never see black people out here, are you with a group?" When I explain that hiking and photography are my hobbies and I do it because I enjoy it, then the conversation kicks up. "What do you like about being out here" or do you ever feel like you're the only one?" People seem genuinely interested in why, as an African American woman, I would have the same love of the outdoors, as they do. Funny.

There has been an increasingly national conversation about diversity in the outdoors the last few months, why is it? Do you think the people talking and writing about it are asking the right questions? If not, what questions should they be asking?

We must move beyond the conversation. You can only ask the same question in so many different ways until it becomes redundant. Things remain the same until they are changed, not through conversation, but through action. We need to stop forming committees, stop writing reports and do the work of change. We need to see more faces of color in authority, in our outdoor arenas. There is nothing more inviting to a person of color, into an environment uncommon to them, than to see faces they can go to for answers that look like theirs.

What does diversity in the outdoors look like to you?

Good question. It looks like me, it looks like you -- but more importantly -- it feels natural; it feels welcoming; it feels common. It's funny how in answering this question, I'm expressing how it would feel versus how it would look, but I think that's what diversity does for people, when it is applied to a setting like the outdoors. It offers a feeling of acceptance versus being a face that stands out because it doesn't match the others.

Just be yourself. I'm not expecting a grand welcoming party. I wouldn't want to apply pressure to people and say "This is what you must do, to be welcoming to those faces that are not here." I will say this: We are all living a human experience. We all, regardless of our heritage and or race, carry the same love, dislikes, preconceived notions and angers, towards the same things. We just carry those burdens a little differently.

Speaking as an African American, I don't want to be treated any differently, I want to be treated the same as the faces that are most commonly seen in the outdoors. I don't want opinions of me to be formed because I don't fit the image of an outdoors person. I simply want to be accepted as a steward of the great outdoors, period. I will however ask like 50 questions of a park ranger if I come across one while out hiking. Don't hold that against me.