Recently I had the privilege of spending a day with the multi-talented Arpita Mukherjee, co-founder of the South Asian International Performing Arts Festival (SAIPAF). Impressed with her vision, I decided within minutes that her story needed to be shared. 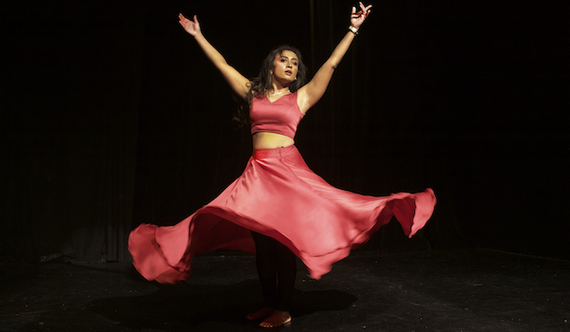 Gayatri Patel Bahl, another South-Asian risk taker, participated in SAIPAF 2015
as part of Dance Night. Patel moved to Bombay when she was eighteen to
pursue a career as an actor and a dancer, paving the way for many
Indian-Americans to follow their dreams. Photo Credit: Abhilasha Shah.

Arpita works with a passion that comes from deep within herself, based on her own experiences and the experiences of her fellow performing artists, which have included large doses of rejection. She has lived to defy stereotypes, and New York City is benefiting from her efforts.

I recently read that the worst jobs for stress include being a doctor, a lawyer or a banker. Yet, these are the careers that many South Asian parents would like to see their children aspire to -- so they can 'make it.'

Arpita knows the South Asian performing arts community very well. "What strikes me when I ask 'What were the first reactions you got from friends and family when you told them you want to be a performing artist' is that not a single artist's response to the question is ever positive," she explained.

Arpita's story isn't much different. "My father and I were at odds about my decision to pursue the arts as a living. At Indian parties, relatives and friends regarded me with concern. What happened, they wondered. Did I suffer from a low IQ or was I just plain lazy or worse, had I become influenced by some American kid."

"These tales, about South Asian parents being disappointed in their kids becoming anything but doctors or engineers, has become a commonplace one. And as my experience has evolved, so has my take on my father's apprehension about me becoming a performing artist," she said. 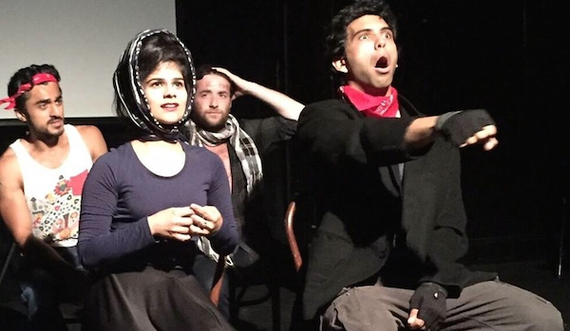 Arpita told me that if it weren't for her father and grandfather, she would have never fallen in love with the arts to begin with. It was her dad who took her to her first musical concert, and her grandfather that told her stories with such theatricality she fell in love with the story's awesome power to move the listener.

"My grandfather's stories could transport me from our two-bedroom flat in New Delhi to places like Benares, Darjeeling -- even London. So why did my father not want me to pursue the arts, when he himself was and is so passionate about it?"

She found the answer when she started trying to raise money for theater and started her own theater company. Every person shook their head and said -- "no one funds the arts" and then they added, "especially South Asians." 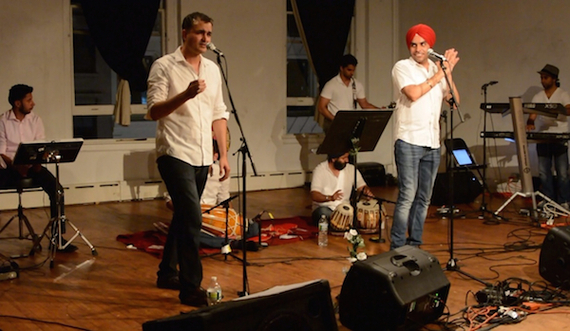 Bands were an important part of SAIPAF, which celebrated South Asian artists
from across disciplines. Rhythm Tolee received the audience award at the festival
for their infectious Punjabi bhangra and sufi music. Photo Credit: Rhythm Tolee.

Arpita told me a few of the commonly heard phrases in her arts funding circles:

Just a couple of these statements are enough to demoralize even the most entrepreneurial artist, but the frustrations of trying to raise money to do good work have reached such highs that there's a disconnect between the South Asian artist and the South Asian community. 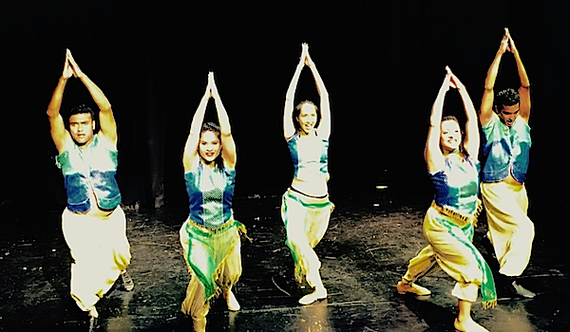 Largely, artists believe that the way to 'make it' is to go mainstream, at which point, the South Asian community will embrace them. But what about the artists who haven't made it big?, I asked.

"Well, they struggle to find a place to develop, to hone their craft, to be supported and encouraged - and to also be given mentorship and well, patronage," she said.

That's where it becomes very personal for me, heading a foundation supporting young global leadership in the fields of art and education (as well as orphan care). How can we institutionally support the incredibly talented performance artists who, like me, have followed their own calling, deciding not to be a lawyer or a banker?

Arpita and I discussed her father's fears. "My father's reservations came from knowing that often no one cares about art -- often concerts of gifted musicians go empty and more often than not, the work artists make struggles to find a space." And, on the other hand, her father acknowledged that if people don't go, such art forms may die.

"And to think that his daughter was entering the world of theater made him see that fear at an even closer vantage point," she told me.

This is how Arpita Mukherjee came to co-found the South Asian International Performing Arts Festival that has just launched its first year.

The Festival has developed as a way to ease some of the tensions in the South Asian community and the performing arts. "We can't just keep complaining that there is no funding, no platform and no mainstream presence of South Asian artists," she added. 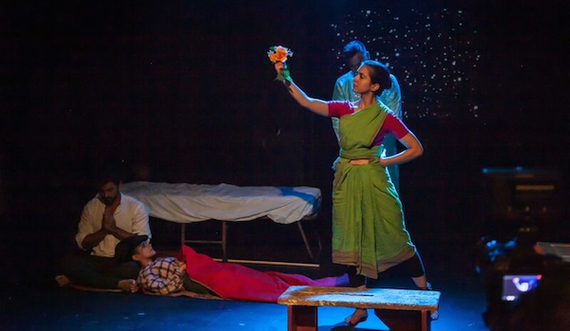 Nobel Laureate Rabindranath Tagore received a comeback at SAIPAF
(production above: Post Office). The festival encouraged the telling of
South Asian stories, old and new, in a way that has never happened before.
Photo Credit: Kabir Chopra Photography.

"We didn't want to just sit around a fancy dinner table and lament at the status quo. The status quo was there for us to change, so we created this festival, said we will give artists a platform. We will say, come, act, sing, dance and play music."

"We charge no fees and let artists keep 40 percent of the ticket sales. We provide marketing plans, create photo and video promos and connect artists to other artists. We program shows together so if you come to see a play, you could also see some dance or music."

This is the beginning, this is how one starts to build a community, create support and provide a safe space for creative growth. "We took the examples of other immigrant communities -- Italian Americans, German Americans, Iranian Americans -- who have all participated in the cultivation of culture," she told me.

"We created an opportunity hoping people will come -- and they did."

Arpita feels strongly that the onus to keep this tradition alive is also on the patrons, particularly the South Asian community. What is created must also be sustained. South Asians have quickly risen to great heights in many of the high-earning professions, yet there are only a handful of prominent South Asian arts organizations, most of which are severely underfunded.

The growth and empowerment of a community should be judged as much by economic achievement as by a place for that community's arts and culture. This can only happen if South Asians invest in the arts, she believes.

Talented South Asian playwrights, actors, directors, musicians and dancers often develop their work outside of the South Asian community and therefore, engage in important cultural dialogues with the community-at-large.

However, questions of representation do emerge. Whose interests do they represent? Which audiences to they serve?

By not providing enough opportunities to such artists to develop work within the community, what the South Asian community is experiencing is an art-drain, where many artists are finding homes outside, distancing themselves from the 'model minority' ideal.

The South Asian International Performing Arts Festival is attempting to close that distance, to introduce to a new, young, robust South Asian community the joys of the performing arts. Just as her father cultivated in Arpita the importance of preserving the arts, SAIPAF has embarked on a journey to make the celebration of South Asian artists, their collaborators and their work an annual event.

"Personally," Arpita admits, "this is a fire that was lit in me during my childhood. And having grown up witnessing the power of the performing arts to keep communities together, I feel it is my calling to keep the arts alive, to not simply accept that South Asians 'don't care about the arts,' to challenge the stereotypes associated with the model minority."

"My father must have worried because this is no easy feat, but I think he knows that nothing important ever is," she concluded.

Although all of our grants have already been allocated for the year, the J. Luce Foundation challenges patrons of the arts to support the South Asian International Performing Arts Festival. We will match contributions, up to $1,000 total, in 2015. Give on-line here or send a check payable to "SAIPAF," c/o M.A.D. Theater, 1271 Sixth Ave. #4300, New York, N.Y. 10020. 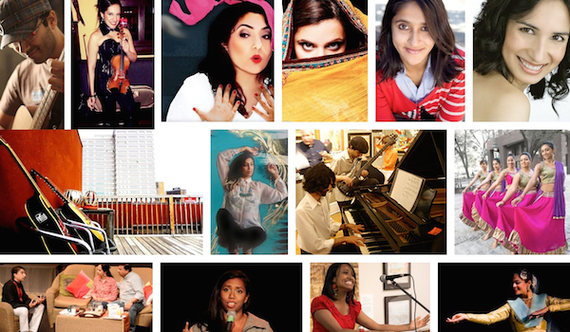 South Asian International Performing Arts Festival (SAIPAF)
SAIPAF is the annual celebration of the diverse perspectives, ideas, and imaginations of artists from the South Asian subcontinent and/or who belong to the South Asian diaspora.

Its mission is to provide a platform to established and emerging artists and professionals involved in all aspects of performing arts (creative and technical), Encourage cultural exchange and dialogue, Re-define the very definition of South Asian 'artist' by including a plethora of works, including but not limited to music, dance, theatre, stand up comedy, performance art, and slam poetry, Provide mentorship, marketing know-how and financial support and Move the conversation forward on issues concerning artists of South Asian origin and other pertinent cultural and political issues.