Described as the story of man going through his various incarnations, Cannes winner Uncle Boonmee is bound to attract new-agers for confirmation of their beliefs. Yet the film does not so much confirm or deny reincarnation as pose meta-possibilities about layers of meaning we humans can find here on earth, in our fantasies, our memories and our ghosts. The film draws us into a green jungle, a blue lagoon, a blue-grey ice-cave, with fantastic images of monkeys, ghosts, and even a princess, leading viewers not so much to know what is going on, but to wonder about their own relation to the mysterious.

I met with director (and installation artist ) Apicjatpong Weerasethakul in the garden of the Grand Hotel, on black wicker chairs, while the sea was quiet in the distance. A man as peaceful, gentle, complex and articulate as his film, he laughed sweetly as I asked him to explain his film for me. "I didn't quite understand," I said. He smilingly obliged to fill in the gaps. 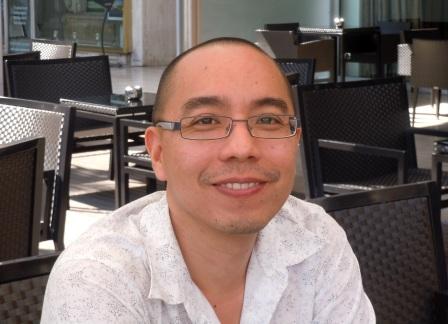 Do you actually believe in reincarnation?

I am from the north-east of Thailand, originally a Laos settlement, where Thai animist belief is very strong. We believe in the transmigration of souls; co-existence of animals, souls, plants. I don't believe in it myself, but I leave open the possibility. Even if you do not believe, you automatically believe in karma. My film is an open impression of the region. Different audiences will get different interpretations. Originally this film had a voice-over, but we thought it better to move it more into abstract territory, to respect the audience interpretation. What does it mean: the buffalo, the catfish? We give the audience freedom.

How is this film about cinema?

Cinema is reincarnation. In this film, it is not only a matter of the guy who remembers his past life, it is also my own remembrance of my past life, part of myself. My father died of kidney failure. The bedroom in the film is an assimilation of my father's space; re-incarnating my own memory, my childhood. I like the idea of the link between death and childhood memory. Consider Marcel Proust who spends the bulk of his book speaking about his childhood. It is not true when we are old, we lose our memory, we still have childhood memories, and childhood is about fantasy, ghosts.

I noticed citations to other films: Antonioni's Blow Up in the photo scene and Chris Marker's La Jetee, when suddenly your time-traveler is filmed in still-shots. How is your film a reincarnation of other films?


Yes, I am citing those films, as well as the films of my youth, the Thai costume dramas. Cinema is about remembering things past: actors are forever young on screen. I used old style film techniques to re-evoke the past of cinema. For example, we used the old mirror style technique to make the ghost, instead of digital special effects. As for people who live on forever -- that is an illusion.

I loved how you brought me into another world: we are literally in the jungle with your characters. It brought me back to my own experiences in Asia.

This kind of movie needs the presence of nature, the sounds of insects. Nature is also a character to go along with the idea of animism.

Your film has so many different registers and tones, from humor to meta-commentary,

I like this idea of fun, sadness, violence at same time. We used six reels in the film, six different styles, six different kinds of lighting. Memory is fading in the north-east Thai region I am from and I wanted to re-create it through the film.

How is Uncle Boonmee's sense of his life affected by the fact that he is reincarnated?

Boonmee is me and I am him. Reincarnation is still a mystery for him. He asks his wife where I can find you, and the wife says, ghosts only attach to humans not places. I mean, that people attach to ghosts, not vice versa. That is why when he asks, where I can find you if I am dead, the wife does not answer. Even though he knows he will be re-born, he is attached to his present life.

So is this film not about reincarnation, but about memory?

It could be: memory is all we have.

What does the ending mean? Suddenly we are in a hotel room with a monk, who decides to strip, shower and go get a bite to eat.

My film is about time and fantasy. We decided to disrupt the sense of time with the last scene. they are in a hotel room. The monk is a witness. He is my muse; in my films, he always transforms into a tiger, into a monk. He is a reincarnation of his own role in my previous film. He wants to take a shower to get rid of baggage, to feel refreshed, clear things. The film branches out like a tree. The ending means: you go into another life activity now.