Every year I'm ready and excited to read the latest YA books from debut authors. Finding a new favorite writer is a special joy specific to book lovers.

That's why after reading The Girl at Midnight (out April 28), I knew I couldn't keep my love of this novel to myself. This story is infused with humor, originality and mystery, and I can't recommend it enough.

I recently talked with The Girl at Midnight author, Melissa Grey, about New York City, the ideal library to live in and a few hints of what's to come in the series. 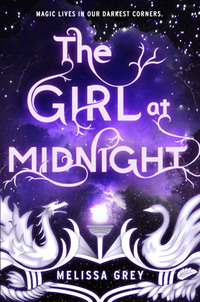 What was it like growing up in New York City? How has that shaped you as a writer?

MG: Growing up in New York was great -- I don't know if I appreciated it enough at the time, but looking back, it definitely affected how I view the world. I was raised in the East Village which has always been a vibrant, diverse neighborhood that's pulsing with life. There was a mix of cultures existing side-by-side and not always comfortably. Seeing the ways different types of peoples both coexist and clash has certainly informed the kinds of fictional worlds I want to build. I'm interested in stories you find in hidden corners of the world about people you might easily overlook. In a way, The Girl at Midnight -- which takes place partially in the East Village -- is my love letter to the neighborhood I grew up in.

What has it been like to hear fan/reviewer reactions to The Girl at Midnight?

MG: So bizarre! As a writer, you live with a story so long that it's strange to invite other people into it. For years, The Girl at Midnight and I were on our own -- I occasionally let my writing partners read drafts at various stages of the process -- but it felt like my private sandbox. I don't read very many reviews -- good or bad -- but it's been fascinating to see how people respond to the story. There are several point-of-view characters in the book, and while I do have my favorites, it's been really interesting to see which of them is resonating with readers. An early reviewer started a ship hashtag on Twitter for two of the characters in the book (no spoilers, but it's a portmanteau nickname like Brangelina) and I was almost reduced to tears. Once the book is out in the world, it no longer belongs to the writer -- it's the reader's. Seeing how they play in that sandbox has been the most wonderful thing.

I absolutely love that Echo lives in the New York Public Library. If you could live in any library in the world, where would it be?

MG: There are so many insanely beautiful libraries in the world. The Strahov Monastery library in Prague, the Admont Abbey library in Austria and the Wiblingen Abbey library in Germany are all so luxurious and beautiful it's like they were pulled out of fairy tales. I would happily make camp in any of them.

What's the process like for building a world that is both based in reality and imagined?

MG: There's no hard and fast rule for creating fictional worlds within real ones, but for The Girl at Midnight, I was attracted to the hidden places of the city no one really looks at too much. My editor came up with the tagline on the cover of the book that really sums up my approach to world-building: Magic lives in our darkest corners. In the world of the book, you can't see the effects of magic head on; you can only glance it through the corner of your eye. That's how the fantasy world exists within the real one. It seeps through the cracks and blossoms into an underworld that pulses beneath the city's streets. The trick, I think, is finding where you want the seams between reality and fantasy exist and then building from there.

What books have stuck with you over the years?

MG: Definitely Neverwhere by Neil Gaiman. I read it about 15 years ago when I was in high school and the notion of a subterranean landscape existing beneath one of the busiest cities in the world -- London -- stayed with me. It engraved itself in my writerly DNA and refused to leave me alone until I created my own. And while I feel like it's almost a de rigueur response for YA fantasy writers these days, Harry Potter was life-changing for me. I was eleven when Harry was eleven, and I grew up with him and his world and J.K. Rowling's writing. All of it became so essential not only to who I am as a writer, but who I am as a person.

If you had real-life Shadow Dust (a magical substance in the book that creates portals one can travel anywhere through), where would you go?

MG: Is everywhere an acceptable answer? If I had to choose, I'd start with Eilean Donan Castle in Scotland. I based Wyvern's Keep in The Girl at Midnight on that castle but I've never visited it myself. I've had to rely on firsthand testimony and photographs from friends, but I'd love to see it for myself. And then because shadow dust is so convenient, I think I'd hop on over to a drier climate and see the Great Sphinx of Giza. I've always wanted to hang out with that dude.

What are you working on next (and can you give us any details)?

MG: I'm working on the third book in The Girl at Midnight trilogy right now and while I'm not at liberty to divulge any details (or titles!) at this time, I will say that no one is safe and the world we see in the final act of Book Three won't be the same world we entered in Book One.