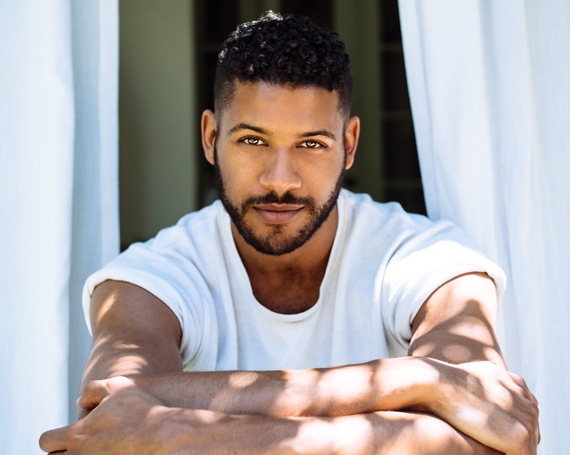 What began as an enchanting conversation regarding the overwhelmingly handsome, openly gay actor/model Jeffrey Bowyer-Chapman's second season starring in "Lifetime's", acclaimed series, " UnREAL", airing on June 6th at 10 pm, became an emotionally explosive, and dauntless heart to heart.
The Canadian born, 31 year old actor spoke candidly and openly, without reservation about the fact that he was adopted, the fact that he was gay, and the issues surrounding both.
Besides his acting credits including films such as, "Dirty Grandpa", Grave Encounters 2", "The Skinny", and "Dear Mr. Gacy", he also speaks out on equality, using his platform as a vehicle to get his message across. I felt very privileged to speak with him. He was undeniably brilliant, extremely outspoken, soulfully passionate, and just a regular blast.....

Congratulations on your second season of "UnREAL".

I'm so blessed that one, we got picked up for season 2 and two, to be back doing it. It was a year and a half between seasons, a long stretch.

Yes, that is a long time. I have never seen the show, and I'm banking on the fact that some of our readers haven't either. What is the premise of the show?

The premies of the show is a behind the scenes of a dating reality competition program in the vane of "The Bachelor". So it's about 5 producers, and the contestants of the show, in a very behind the scene manner. There are different worlds. The world of "UnREAL", and the world of "Everlasting". "Everlasting" is the name of "The Bachelor" type show. The most interesting thing about the show is, it peels back the reality show, it answers people's questions, " what is real, and what is scripted, what is authentic". The 5 of us come back every year, Shiri Appleby, Constance Zimmer, Craig Bierko, Josh Kelly and me, with a rotating cast of characters, our new contestants.

What part of the reality show are you. What exactly is your role?

My character's name is Jay. He plays a field producer on "Everlasting". He has 10 contestants that he splits up into groups among the producers. My job essentially is, to get as juicing, salacious and interesting footage and soundbites from each girl, as possible, using any means necessary. So what that means is manipulate them, and lie to them , putting them in a really uncomfortable situation. We ask him some really evasive questions, put the camera on them, letting it role, and see what comes out of them. There are situations where these girls are too smart for that, and know they are being manipulated, and that's where the lies come in to play. We start pitting these girls against each other, filling their heads with thoughts that they wouldn't ordinarily have. We also have access to all of their psych evaluations. We have all the juicy details on them, whether they suffered abuse as a child, whether they had eating disorders, whatever it was.

And I'm sue you use it against them.

You know what, without ever seeing this show, I love it. So now tell me something about JEFFREY.

My father is from Jamaica, my mother is from the UK, but I was adopted as an infant by a really wonderful family, in Alberta Canada. What we refer to as, "Texas of the North". So I was a mixed race child in a predominantly white environment. I never really felt like I quite fit in. Other boys were playing sports, and into hunting, and stereotypically masculine activities. I was always more attracted to the arts, I loved to dance, I loved to sing, and I always knew I would be an actor. I don't really know why. People ask me why I wanted to be an actor, but it was always just a matter of fact thing. At 16 years old I was signed to my very first modeling agency. That was my first real introduction to the entertainment industry. It really opened my eyes to a world that was available to me. I finally started to begin to feel like I was finding my tribe, and found other people that looked like me, and thought like me. Because of the world that I grew up in, not necessarily my family, I've always had a reverence for life, and had the ability to laugh at myself, and the world around me. It was a really an eye-opening experience for me, soul shifting, to be able to finally be around people who I could tell really honestly what was going on, what was going through my head, and absolutely hear " omg me too". I really started making money as a model when I was 19 and 20, and started traveling the world. At 21 years old I found myself in Vancouver, and that's where I got the part for my first movie. I was sitting in a restaurant and the director came up to me, and asked me to read for his film. I really took it with a grain of salt. It was the creepiest casting situation, probably. It turned out that is wasn't. That was my first introduction to the world of television and film. From then on I started doing small guest starring roles. I did that for about five years, and I was still modeling as well. The acting jobs were never really roles that I could say I was passionate about. A lot of them were the movies of the week, and I just really wasn't satisfied. I just always knew there was something missing. Then I started playing gay characters. I started talking to my team and made it clear that my intentions were to align my personality with my full calling, and have a positive representation of an openly gay actor. To be essentially in the entertainment industry, what I never saw when I was growing up when I turned on the television. I never saw someone that looks like me, or someone who was an interesting gay character. Once I did that everything else fell into place.

So your Jamaican father and UK mother were your biological parents?

What made you want to find them?

That's a hard question. It was a biological urge. I've always had this insatiable curiosity my entire life. I always want to get to know myself. I wanted to know every side of myself. The family that raised me, I love then very much. I was adopted by them for many many reasons. There were parts of me that are very much like the environment I was raised in, but there will also little things about myself that I always chalked up to be "Jeffreyisms". Then the opportunity arrived, where I got my non-identifying adoption information from the government of Canada. I started reading all of these case files, six months of interviews with my biological mother while she was pregnant with me, done by a social worker, and then six months of interviews with my adoptive parents after they adopted me. Learning all of these things about myself, through a very detailed case file, I realized from reading my biological mother's words that we had so much in common. I started to make sense of all the things that I had attributed to "Jeffreyisms". That's what really sparked it for me.

So do you think that it was more difficult to come out to adoptive parents?

That's an interesting question. I know my adoptive family who raised me , they know me. They know me since I was 12 days old. So, it wasn't really that much of a shock to them. I've always just been me. I think that it was challenging for them to come to a point of acceptance, where we live geographically. They knew that me being a gay man and a man of color, life wasn't necessarily going to be that easy for me. I personally think that being gay is a biological predisposition, no doubt that I was born gay. It's certainly not a choice on my part, I can't speak for everybody else but they are all different shades of gay, pan sexuality, bi sexuality....but I've always had a very strong sense of who I am. I never had a question of it. In many ways they loved me and they still love me, as much as they could have an understanding of it...they knew me their entire life, so in their guts they knew I was a gay man, but they certainly had their worries. I still have my qualms about coming out to my biological family. I don't know if that's actually true, because my biological father has a relationship with my siblings that I've met, so he already knows I'm gay. I do not apologize for who I am, being gay was not a choice, so if they take issue with it, then that's on them.

So, your character on the program is gay, however there is no story line about that...it just is...

One of the most priceless gifts I've ever been given. When we shot the original pilot , my character of Jay was straight. There was a lot of pressure to live in the character and not scare the producers or writers and let them see my true colors. When it comes down to it, at the end of the day it's money. I can understand it, but it's not the most comfortable environment. So he was straight in the original pilot, and I loved playing him, and I loved the project so much. When the show got picked up, the co-creator of the show called me at my house, and asked me how I would feel about the character being more of who you are. I asked her what that meant, and she said that they wanted to write my character as a gay man. I was just so blown away by that!

How long in advance of the shooting do you receive a script?

Anything else that you'd like to say to your fans, or promote for yourself?

That is a loaded question.....Thank you! To all the fans of UnREAL, and all of those who've supported me whole-heartedly over the past few years. It is a complete honor to be in a position to be given a platform to be able to play a representation of a gay character in television and in film. It is a blessing. It was a bold move to make the decision to come out as an actor, and to be out, and to play out characters . I haven't really seen it done before, and as much as my team has their fears and their worries about me, about making that decision, I was always very strong in that decision. It's very, very strongly and authentically in my guts. My feelings have led me to where I am today, they have never led me astray, I don't think they ever will. Any advice I can give to anyone out their, is to whatever you identify as, gay, transgender, straight, black, white , Asian., you all have that God given gift, called internal GPS. Every animal on the planet has its instincts. If you go against your instincts, I feel that it's going to lead you down a very dark path. When you listen to the truth of who you are, or what you know is right, and what feels good, you will always be taken care of.

Well spoken! One last question...if being gay was not a biological predisposition, and you had the choice, would you still choose to be gay?