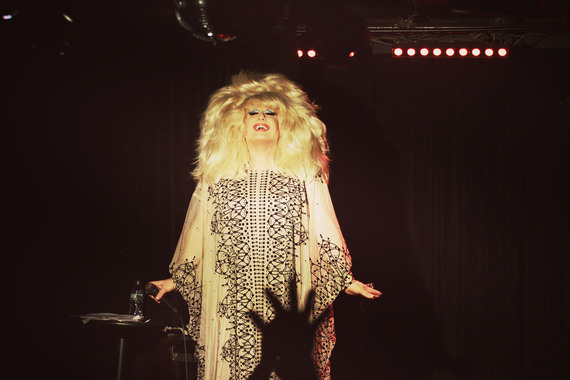 Lady Bunny needs no introduction, as she is one of New York City's night life's most glittering and dauntless icons. Her new show at "Stonewall" is not only receiving enormously successful reviews, but is most likely stirring up some much needed conscious searching, in a most humorous fashion.

However, this interview is not for the "faint of heart". It comes complete with a warning for those under 18, and for those without a sense of humor...

Lady Bunny, tell us about your new show.

Well, a lot of it is comedy. I tend to do irreverent comedy, with a lot of dirty song parodies, jokes...but this show is a little different in that, it also takes aim not just at pop culture, but also PC culture. Everyone is so politically correct, that they just made "Dick Van Dyke", change his name to "Penis Van Lesbian". Jerry Seinfeld and Chris Rock, stopped performing at colleges, because the kids on the campuses are so politically correct. The kids at colleges have trigger words that they tell their professors, like: " Oh I can't hear the word rape". I say, " Excuse me, the teacher tells you what to do. If you're such a precious crybaby that you can't even hear the word rape, then I guess you're not going to be studying history, criminology, psychology, sociology, or literature".
It's gotten to be very oppressive. It's basically a battle of the PC crowd, and the free-speech crowd. Sometimes people get offended. Too bad!

Joan Rivers was actually hilarious, and always off-color. At her funeral, Howard Stern read a joke that she told late in her career, about how her c**t was so dry, that if Whitney Houston had a c**t, as dry as hers, she wouldn't have died because it would have absorb all the water up in that bathtub. It's really gruesome, and it's really wild, but it's really funny. My attitude is, the world to be a terrible place, let's get through it together, with a laugh! Let's stop these word police, that are trying to take away words that I use as a comedian.
I make a joke about the Syrian refugees, in my show, and of course the hundreds and thousands of people that will fluster Leap Syria, and settle any way they can, is an immense tragedy. I performed the show in San Francisco, and afterwards, a lady from Syria came up to me. She said she was from Syria, and I thought, so get ready, here comes the bomb in the backpack... She told me that in her country, there is a saying; very best humor comes from the very worst tragedy.
We're living in a world, we were actually destroying the atmosphere. There is war all over the world, there is racial injustice, women still don't have equal rights, they turn back the clock on gay rights, can't we have a joke? Can't we have a laugh, and make this existence on earth a little more enjoyable? Even if it crosses the boundaries of good taste? This show is not geared towards anyone prudish, or anyone with an overly PC mindset. They will not enjoy it, and I do not want them to come. However, if they want to see a very funny show that is not politically correct, then I think they will love it.

So, when are you running for President?

Well Lady Bernie thinks he's winning the primary today, but I don't think he's that popular . This show is not about politics at all. But, it doesn't shy away from gender politics. One Target of my humor is Caitlyn Jenner. Last year everyone was falling all over to support her transition, this year she reached out to Ted Cruz to be the trans ambassador, ...."Honey you're seeking to join the political party that seeks to destroy all of your rights"? Thanks a lot! She's cosmopolitans woman of the year, she hasn't even been a woman for years!

All of these bills have come up in North Carolina, Mississippi, Tennessee, and there's more coming up to discriminate against gays, I wish our community could stick together, and fight the real enemies, and stop the in fighting. All I have heard for the last couple of years is what language I can't use. I really think that if you treat people with respect, face-to-face, then labels don't matter. If I get a pronoun wrong, then it's not going to be the end of the world.

So again, when are you running for President? How fun would that be?

I don't think that anyone running at the moment, I would think that it is fun. I feel like trig was it friend in the 90s, when we had Wigstock the movie, Priscilla, Ru Paul, drag was on every commercial.... Insta rates were really into it. Then the trend ended. Let's hope that the same thing doesn't happen to trans people. It very well could. There are tons of trans images on TV now. I do not think that Caitlyn Jenner is a positive role model. I don't think that she deserves any accolades for getting a shot in her reality show where she is sitting at a card table in West Hollywood gay pride, handing out condoms. There are people who make food for sick people, and deliver it to them. Let's shine the light on them, not some bogus reality TV show. A lot of what we hear about Kaitlyn is false. I giggle every time I hear them planting items in the National Enquirer that she and Candace Tate are dating. I know Candice;s husband, donkey Dick the Italian stripper, there is no way in hell that she is dating Caitlyn. You've got to remember that Caitlyn is a pot of the Kardashian entertainment, which began when Kim sucked off a black man on video. I thought, wow, I'm going to have to start recording my sexcapades....with as much dick as I've sucked....I'd be the Pope by now, not just a leading star.
All of the stuff that's been thrown out there is confusing. It's confusing to trans friends that I have. Caitlyn Jenner is not popular with the trans community. And when you put Will Smith in women's clothing and say that he's gender queer, I'm sorry but that does not ring true. That's the fashion industry trying to jump onto trans trend. Will Smith may be wearing a skirt, but he's got a worked out body, he's wearing no make up, and no other female attributes. Now that we've got these real enemies in North Carolina that won't even let transgender people use the bathrooms, gay rights are bitterly in the toilet. And look at the name of the gay community, LGBT IQA, most people don't even know what that stands for.

I had to look it up.

So if we can't even name one organization, how could we bond together, and fight our real enemies? We live in a bubble. We are under attack still, nationwide. I really wish our community could bond together instead of this constant focus on labels.

Something tells me you might have somewhat of a solution.

The solution is, not being such big crybabies. Sometimes you're going to be offended, does that mean that the person offending you should be put in jail? No! That means that you've got to maybe avoid that person. In my show I talk about slut shaming, which is something I've been hearing a lot about. I don't even know what that is. I mean isn't being called dirty names the most fun part about being a slut? Slut shaming sounds to me like a word or an accusation that someone makes towards someone who is getting laid, because they are bitter that they aren't getting laid. All slut shaming means is that you were getting sex, what's the shame in it? Monica Lewinsky was on a "Ted Talk", griping about how she was one of the first victims on line, slut shaming. I know that enemies of the Clintons use that affair, however from where I stand, as a card carrying slut, Monica did blow the married President, in The White House, and marched out with a dress covered in semen. That is slutty. She may not be a life long slut, but if she were a good slut, she would have licked all that cum off of herself.

You know what, I love being a slut.

The same thing with fag shaming. I go over a lot of these terms: heteronormative, LGBTIQA, gender queer, tranny, I go over a lot of these words that have changed over time. Another one is fat shaming. I've done daily research on this, and I have concluded that if you eat way too much, you do not get thin, as I did not. If somebody try's to fat shame me, I just say," Oh, it would make me feel horrible if you want to bring me that pie over there". If Bianca Del Rio try's to point me out on stage, to a bunch of Queens, she is going to say, "It's the old fat one, with 5 blonde wigs on her head". That is what I am! If I don't wanna be fat shamed, then I need to stop eating.

So where and when is this show?

It's at Stonewall. It runs until April 30th, but it's very likely to extend through the month of May, as well. I love performing at Stonewall, because I'm on West Village resident, I know will the gays moved up to Hells Kitchen, but I DJ still at the Monster, there on Sunday nights, and if I could do a gig where I could walk to work, I'll tell you, Stonewall is a landmark where gay-rights started in this country, with that riot. It's a good old fashion dive, and that's what I love about it. My show is raunchy. It's the perfect place for it. The price is as cheap as my humor, it's $19.99, and the drinks there are reasonable. There is a chance it will be extended even into June, because of the sold out crowds.