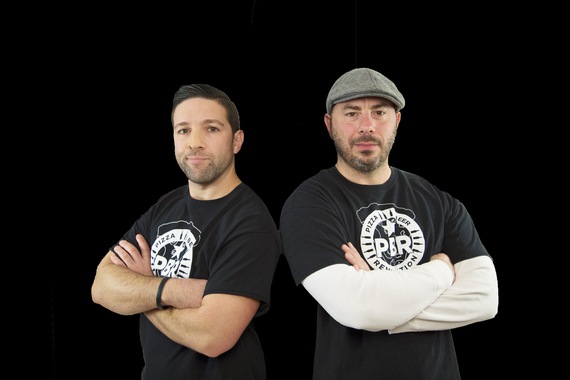 In case you're wondering what PBR stands for, obviously it's "Pizza, Beer Revolution......so then what's that about you might next ask. The answer is: Having been coerced by my friend Celeste, ( whom I owed a countless amount of favors), to travel in the dead of night, on a cold freezing April Eve to Asbury Park New Jersey, and waking up to an even colder, wetter, snowy morning to interview 2 men I knew nothing about, except that they ran a super successful "Podcast", you can just imagine my dismay when I discovered that the name of their "Podcast', PBR stood for Pizza, Beer Revolution.
Not knowing exactly the true meaning of "Podcast" and being mildly appalled at the fact that these men sat around eating pizza and drinking beer while revolutionizing, it was to my greatest astonishment that within minutes of meeting, Mike Pullano and Derek DeAngelis, (Derek D), I became a hardcore fan, and treasured our very introduction.....
Both were funny, brilliant, candid, and possessed an inner sensibility and authenticity which flowed through their lips as they spoke about their podcast.....

Let's start out by the two of you spelling your names for me.

D. You got to love yourself before you love anyone else.

I'm not familiar with "Podcasts".

D. I hate all of them except for one.

M. What's that? Ours? That's not even my favorite.

D. You really don't know what a podcast is? A podcast is just an on demand radio show. You can listen anytime you want.

How would I listen to your show if I wanted to?

M. You can listen to us on iTunes, You Tube, anywhere on line or at our website pbrpodcast.com .

M. Well because Pizza and Beers will get you in the room, but it's all about the revolution of our guests, which apparently is you today.

No I'm interviewing you, you're my guests.

D. Everyone likes Pizza and Beer, so we invite them for Pizza and Beer. All joking aside, it's all about the revolution of our guests, and our guests are from any platform. We have interesting people on our show.

M. We've had comedians, musicians, authors ....we've had everyone on our show. Generally speaking we find people who we think are interesting, people that have something to add, that people want to hear about.

D. We're Italians from the Jersey Shore, so our whole lives revolve around food. If you walked into either one of our homes, his mother would try to feed me. Then the conversation would happen. That's how Italians kind of grew up.

I'm from Brooklyn, I get it.

M. You get it, so Pizza and Beers will get you in the room, but it's all about the conversation.

D. We have guests for the most part from the entertainment industry. We talk about pop culture, the times and what's going on. We just had the lead singer of "Big Bad Voodoo Daddy", Scotty Morris as our guest and here we are sitting down with him, getting all these stories, that you would never get if I just met him on the street, or went to his show. We went in depth about his history, his life. That happens with all our guests.

Why do the podcast?

M. We're both in the entertainment field respectively. I'm a camera operator, director and producer. Right now one of my main shows is "Impractical Jokers". I work for "The New York Rangers", I do a web series for them, I produced cage fighting for many, many years....Then Derek is an actor, comedian, and has a couple of shows.

D. I host a show called, "Fast Lane Daily". It's a daily show about car news, but it's comedic, it's funny. It's on You Tube, Roku, ..we just got bought by "Time INC." You may have heard of them, they own Fortune, People, and they own us now.

M. The show works well in that sense. Derek is actually the comic relief, and I drive the ship. It's not like we're two comedians trying to yuk it up. We're just two guys trying to dig into a revolution of somebody we just met, and through our special way of interviewing, we have a lot of fun, and play some games, and we try to make our guests feel comfortable. In the meantime, hopefully entertain someone.

How long is each show?

M. About an hour. It depends. We have short shows, like we just had, "The Amazing Kreskin", which was a very short show. You would know most of our guests. Scotty Morris, sat down for close to an hour and a half.

Why not take your show and pitch it to a network?

M. It's interesting because, let me give you a little history on how this show came about. Again, we're both from production. Initially this show came about from writing pilots, because I've written and tried to produce many pilots. You throw a lot of shit at the wall in this industry, and some stuff sticks. Even a show like Impractical Jokers had four previous pilots before Jokers got picked up. So you're just constantly throwing stuff. The whole idea was to write a TV pilot about revolutions that surround us, in all industries. Kind of talking about stuff like we're talking about now, like you just asked me, why not television, why not radio, well I just downloaded our show onto your phone. Now you can watch Derek's show on your phone, and that's a revolution within itself. So we were getting together to write this TV pilot, and literally I said to another guy that was involved, "Why don't you pick up some pizza and I'll get some beer, and we'll talk about these revolutions and well hash this out". He came over and the Pizza Beer Revolution spawned from that.

D. I came later. I was a guest on the show. Then they had me back as a guest host. Then they asked if I wanted to be a host on the show, and it's so much fun to do. You meet the guests. I brought a certain thing to the table...it's visual and audible. We have a rig on the table with cameras and lights, and you can watch and listen or just listen on your phone, on your computer, where ever you want.

M. So our show in a sense is a revolution. To pitch it to a network is almost going backwards. Shows are living on the web now.

M. The interesting thing about our show is that when you watch it, you see everybody all of the time, which was a conscious decision on my part. There's 4 boxes, four cameras. It's a quad shot so you can see everybody reacting. People really grabbed onto to that.

D. You want to see the other person's reaction.

Does it cost money to produce the show?

M. There's some costs in housing.

Do you make money doing the show?

What kind of fan base do you have?

M. We're not "The Beatles", but were not a bunch of people sitting in a basement, talking to a wall.

So people actually depend on watching your show?

M. Some people do. Our show is global.

How is your fan base in London?

M. It's big. I walked into a bar in London and it was pretty crazy what happened. One of the woman picks up her phone and she has a half-naked picture of Derek as her screen saver. To me it feels like we have some fans in London.

M. With our podcast we've created a really diverse fan base. The women are very active on social media, purchasing our products and things like that, but when you look at our demographics of downloads, there's a majority of men. The men don't purchase, they just listen.

What does the producer do?

D. Franki is probably the glue of it all. Producing wise she's very organized, she stacks up guests....

M. It's a very produced show.

Why did you want to produce this show, (I asked Franki the producer).

F. I was working with Mike a little bit about the revolution, and that turned into a show, it was a very male centered show. At first I would say I was almost like an advisor. I would give feedback, I would say this works, this didn't work, this part needs more structure.....my first involvement was in that capacity. Then I worked on the script of the show, bringing more structure to it, more continuity. Then I worked reaching out to guests, booking guests....

Somehow I feel like you're the mastermind behind this.

So how many of you are involved in the show?

M. There's 5 of us. Franki, me, Derek, we have an intern, Dennis, and Syd Lesperance is our fact checker. We also have a featured guest host, Joe Gatto, from "The Impractical Jokers". If you scroll through our repertoire of guests, you will see what a good job Franki does, it's pretty impressive.

On July 10th PBR will be doing a live podcast called: "The Asbury Park Podcast Festival". This will be the first year. There is going to be 6 acts in one event. It will also feature Joe Gatto and Sal Vulcano from "The Impractical Jokers". Stay tuned for more information as the time grows nearer.

You can follow PBR podcast on the following social media outlets:

Also subscribe and listen on Stitcher, ITunes or on pbrpodcast.com