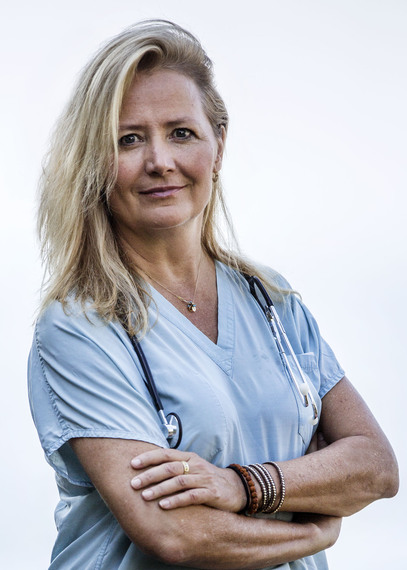 A Malibu mother of two teenagers is walking straight into one of the most dangerous situations in the world. Dr. Suzanne Donovan is one of a team of volunteers who have arrived in Sierra Leone with the World Health Organization (WHO) to help deal with the Ebola outbreak.

Dr. Donovan began her career in medicine as a medical student working in Tanzania, at the beginning of the AIDS crisis in the mid-1980s. She worked alone among wards of dying patients stricken by the disease that remains the biggest epidemic Africa has known. She has a great love for the continent and feels that her medical career has come full circle.

One of the biggest concerns with Ebola is the number of healthcare workers infected and the frighteningly high mortality rate in Africa. "That's because basic principles of infection control found in the United States like hand washing and protective equipment (PPEs) are not available in many African hospitals. Ebola is very unforgiving of any breakdown in infection control practices," said Dr. Donovan, who will be fully suited up at all times. She's also packing medications to protect herself against malaria and diarrheal diseases common in Africa. She's been immunized against almost everything she could possibly catch.

As a Professor of Clinical Medicine at UCLA's David Geffen School of Medicine and the Infectious Diseases Department at Olive View-UCLA Medical Center, Dr. Donovan works in an infectious diseases unit that treats the most resistant cases of tuberculosis in the western United States. "Part of my job is training people to protect themselves from infection. In Sierra Leone, I will be working in a hospital to improve infection control practices and also acting as an infectious disease consultant. There's more to prevention than just basic hand washing. Patients need to be isolated by risk group. They may have other infectious diseases like malaria or TB that also need treating. Some hospitals there don't have running water, gloves or cleaning solutions."

Dr. Donovan doesn't believe there's a risk of an Ebola epidemic in the United States or Europe because of the high standards of infection control practices and tertiary care available. But the threat is significant in Africa. "The First World has a moral and public health responsibility to help Africa deal with this epidemic in any way possible," she says. "To not help because Ebola is not an immediate threat here is just plain wrong."

Although she has tremendous respect for the communicability and severe outcomes of Ebola infection, Dr. Donovan said, "This is what I have been trained for. It's like asking a fire fighter not to go into a burning house."

She's more afraid of rabies, where the death rate is much higher. "But dying from an Ebola hemorrhage creates a horrible image in people's minds," she said.

There is currently no licensed vaccine against Ebola. Trials have started and medications are being evaluated then fast-tracked for use in Africa. One of the biggest risks for healthcare workers is exposure to the virus when commencing IVs or drawing blood. One of the safest ways of providing fluids to patients who can't take oral fluids is to use intraosseous infusion that puts lines directly into the bone marrow. Dr. Donovan is taking some with her that have been donated by the manufacturer.

The two main agencies currently handling the Ebola outbreak, providing both clinical and epidemiologic technical support, are MSF (Doctors without Borders) and the WHO. "There is a lack of other international agencies getting involved, which I believe is part of the challenge. This outbreak is totally under-resourced, not only in clinical care where there aren't enough healthcare workers, but in the basic epidemiology of doing contact tracing and putting people into isolation. This epidemic has spun out of control because the basic tenets of an outbreak investigation are not being followed. The United States, Great Britain and all major countries need to provide more resources to West Africa.

"It's not clear to me why there hasn't been a more dramatic response. We don't have any idea of the denominator of this outbreak, how many people are infected or the attack rate. We haven't been able to get out to the villages to see the extent of the outbreak."

Dr. Donovan's employer, Los Angeles County Department of Health Services, has given her time off to go to Sierra Leone. She said, "They recognize this is a public health crisis of international proportions."

If she does get infected, Dr. Donovan will most likely be evacuated to Geneva or back to Los Angeles. Not all of her colleagues at UCLA are supportive of her trip, "Some of them feel the risks to me personally outweigh any public health benefit."

But her children, Max, 17, and Gabby, 15, are fully on board. "Gabby has accompanied me on other medical trips to Fiji and Belize. She wanted to come to Sierra Leone as well and was prepared to put on a hazmat suit, but this is not a mission for anyone who is not a healthcare worker or hasn't had extensive training with highly communicable diseases.

"I believe the most important thing we can offer in life, whatever we do, is to not be a bystander and make the world a better place, whether it's in a small way or a big way. It would be easy for me to paddle-board my way into the Malibu sunset, which is what I do to relax when I get the chance, but that's not how I live my life and that's not how I want my kids to live their lives."

The views expressed in this blog are Dr. Donovan's alone and do not necessarily represent the views of any of the organizations mentioned above.