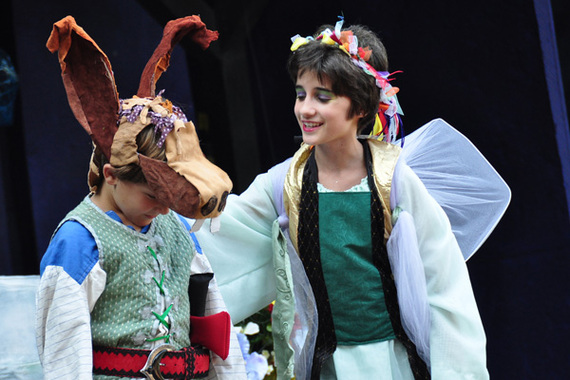 In Shakespeare, as in myths and stories throughout the ages, forests are magical and transformative places. Weavers grow ass-heads in Shakespeare's woods. Lovers elope. They write reams of passionate letters and fall in and out of love there. Rebels hide out and plot their attacks on kings. Young women and men are banished. And in one famous scene, the woods themselves move, defying the infamous ambition of a Scottish king who claims that no "tree can unfix his earth bound root."

It is fitting then that the home of New Genesis Productions, a youth theater company that specializes in Shakespeare, can be found deep in the woods of the Catskills Mountains in upstate New York. At the end of a bumpy track, just up from the vast Ashokan reservoir that feeds New York City its water supply, New Genesis' outdoor stage is nestled amid fir trees, green ferns, and leafy maples. For six weeks every summer, the "Little Globe" stage and its woodsy surrounds are alive with kids and teens living and breathing, grappling with and delving into, the very heart of Shakespeare and his plays. 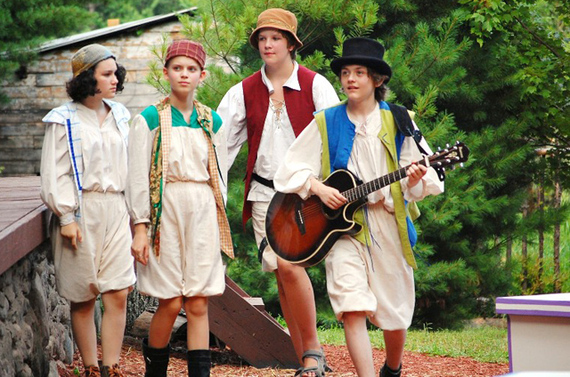 "I fell in love with Shakespeare when I was very young," says Lesley Sawhill, the co- founder and artistic director of New Genesis Productions. "I had the opportunity of seeing great Shakespeare at the Oregon Shakespeare Festival when I was growing up. I remember saying to my mom, 'I want to do this.' And ever since then I've been working toward it." Lesley has over thirty years of experience as an actor, director, and teaching artist and over a decade ago, she and her partner Ron Aja started New Genesis Productions.

"Each summer, we offer two week intensive day camps for different age groups," says Ron, who is the production director for the company. "The children and teens work on a selected Shakespeare play. They explore their characters and understand Shakespeare's language, build acting, movement, and voice skills, and then put on three public performances on the final weekend of camp." 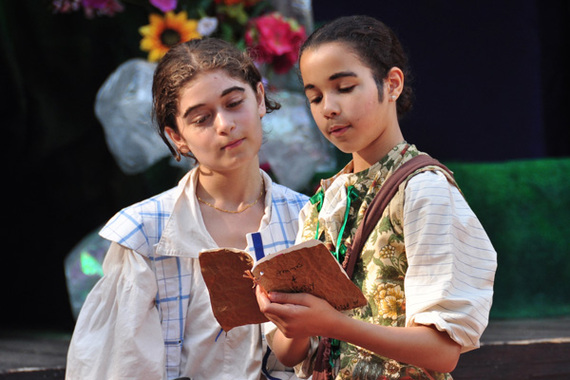 New Genesis does not use the word "intensive" lightly. "Putting on a Shakespeare play in two weeks is no mean feat, even for professional actors," points out fifteen-year old Dante Kanter, who has been in nine New Genesis shows. This year he is a production assistant for one of the younger groups. "Everyone has to work hard, really hard, but it's worth every minute."

Even with the youngest actors of seven or eight years old, Lesley (and her team of production assistants and visiting directors) never cuts corners. The plays are edited a little for length, but Shakespeare's language is left in its original form. Nine-year old Fae Leonard Mann, who last year played Puck in a New Genesis' production of A Midsummer Night's Dream, is not overwhelmed or intimidated by the sometimes lengthy monologues she has to perform. In fact, Fae is quick to point out that it is the "language" that is the "best part of Shakespeare camp:" "It's like poetry and it has rhythm and it is so fun to say." 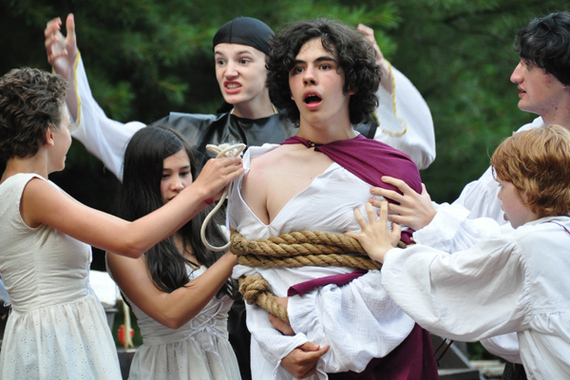 The kids at New Genesis are not only expected to memorize and say these lines. One of Lesley's key teaching strategies with the young actors is for them to really understand the language too. "What's happening here with Shakespeare is that it's really delved into," says Brandon Sawhill-Aja, Lesley and Ron's eighteen-year old son, who was with the company from the very start and is now training full time as an actor at New York's Neighborhood Playhouse. "We look at the play very specifically: how each word, each phrase is put together, how each scene - and building together to an act and the play - is constructed."

Twelve-year old Zoe Harvey says this can be a challenge, but it's a challenge she relishes. "I love the way that everyone here treats us like professional actors, even when we're young." Fae's mother, Pamela Sue Mann, echoed this and praised the way Lesley "has so much respect and trust and belief that the kids can do this and she has an instinctive way of communicating the work." 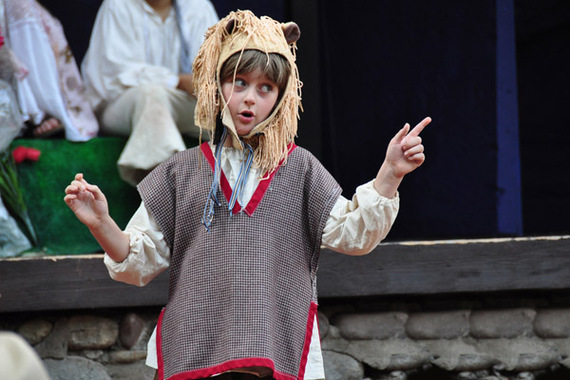 It's clear that Lesley and her team are passing on a great love of Shakespeare to their young troupe. "His stories are as old as he is, but the conversations he writes are so reminiscent of today's stories and today's interactions," says Jack Warren, who is a junior in high school and has been with New Genesis for a number of years. Sixteen-year old Helena Ojarovsky similarly loves the timelessness of Shakespeare plays: "In each character, you find something you recognize in yourself."

Helena and Jack recently played the leads in New Genesis' spring production of Romeo and Juliet, in a sold out run at the Byrdcliffe Theater in Woodstock, NY. "The summer camps, we quickly discovered, were not enough," says Ron. "The kids were hungry for Shakespeare year around. And so we started offering winter master classes and fully staged productions at indoor theaters too."

But the summer intensives remain the staple for the company. And at this very moment, deep in the woods of the Catskills, the young actors of New Genesis are working hard on three productions: The Comedy of Errors, Two Gentleman of Verona, and The Merchant of Venice. When Hillary Harvey Hoffman dropped off her daughter Zoe this week for the first day of her fifth summer Shakespeare camp, she looked up at the outdoor stage, settled amid the trees and glowing ferns, and remarked, "This place is magical." 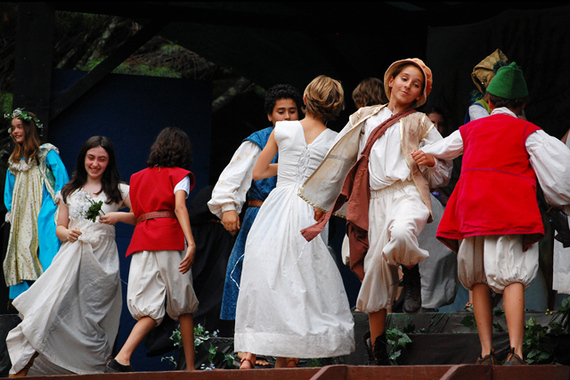