"You are not alone." As director Rob Marshall remembers it, he heard President Barack Obama inadvertently use that "Into the Woods" quote during a memorial service on the 10th anniversary of the Sept. 11 terrorist attacks. It was then that Marshall knew he had finally found a reason to re-make Stephen Sondheim's musical for the big screen. And while it doesn't appear that Obama used that exact phrase during his speech that day, it is in the president's repertoire: Obama has said some variation on "You are not alone" in speeches about the massacre in Newtown, Connecticut, Israel and Ebola.

As Marshall told the story to Emily Blunt, who plays the Baker's Wife: "Obama said, 'You are not alone, no one is alone,' which is the lyric, the actual lyric word for word [from the show]. And Rob called his producers and he said, 'We have to do this. This musical is relevant.'"

"That’s the first thing we talked about," the production designer, Dennis Gassner, told HuffPost Entertainment. "I asked what inspired him to make this he said exactly that. I said that’s what I felt too ... If you have a strong idea when you’re coming into a project that becomes your foundation."

Their foundation also lent the biggest changes we see on screen. 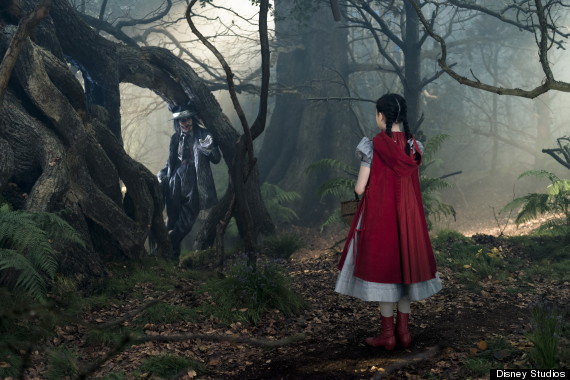 There was quite a bit of fear that Disney would, well, "Disney-fy" the dark, sexual comedy of Sondheim's musical. Fans were worried almost from the outset. Would there still be predatory undertones when the Wolf sings to Little Red in "Hello Little Girl" or when she recounts the experience in "I Know Things Now"? And how about the beloved fairytale princess? Would several of them still fall to gruesome and untimely deaths?

Then, the film emerged in screenings to a collective sigh of relief. Things are missing, of course, but for the most part "Into the Woods" is intact. It'd be strange if it wasn't, really: Sondheim worked through the project along with James Lapine, who wrote the original book.

In fact, Marshall said he was more precious about things than either of them. "I was actually the one, many times in many cases, saying, 'No, no, no, we have to hold on to this,'" Marshall told HuffPost Entertainment during the "Into the Woods" press junket in New York City at the Waldorf Astoria. "But you have to consolidate, you have to be smart, you have to say, 'How can we do things more economically?' You have to make choices and cuts."

Still, beyond the obvious plot points that are missing, the movie is not simply the show translated to the screen. Instead, The Disney Effect comes alive in emotional choices. There's a sense of hopefulness and unity -- those themes apparently inspired by Obama's words -- that aren't so much missing from the stage production as not intended for it. 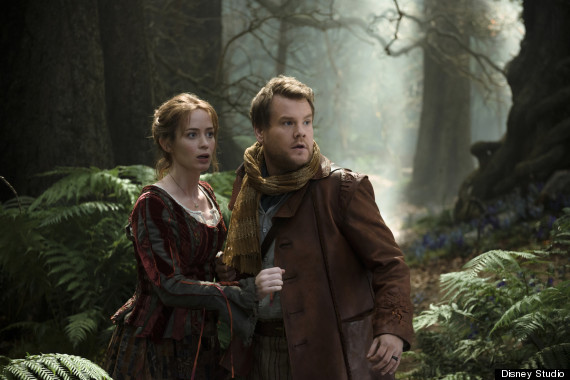 'I was looking for as much heart as possible," Marshall said. "I think the way you care about the characters especially at the end is by caring about them in the beginning. They can’t be two-dimensional characters. They have to be fully fleshed out."

He continued: "Of course, they have their issues with morality and things that they do to get their wishes. I mean, they’re questionable. But I do think that you have to feel for them and want them to succeed and care about them, and that’s something I was trying to bring to the piece and to the casting as well -- that you like these people and understand them and can root for them and be with them."

Another element of that was the proximity endowed by the screen. "You are like this," said Anna Kendrick, who plays Cinderella, holding her thumb and index fingers close together. "You get to fill every note every rhythm with thought and discovery. In some ways, I feel like film is an amazing place to explore that because you can be inches away. You can feel Cinderella trying to work out what to do next. There’s a choice to be on stage, but I think there’s a really interesting choice to be made for that on screen." 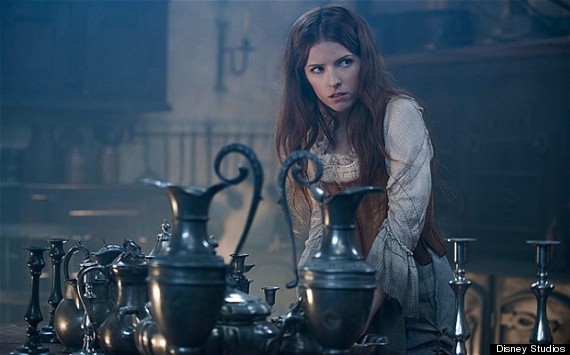 Christine Baranski (the Stepmother to Kendrick's Cinderella) echoed that sentiment. "When Meryl Streep sings 'Stay with Me' to Rapunzel, there’s a depth to that witch that we may not get on the stage. Why is she so mean? What is she protecting? You can see a real inner drama happening with that woman in her desperation to keep her daughter and the fear that the outside world will come in and steal her away," she said. "In cinema you can see close-ups. Cinderella looking for the prince or the pain in people’s faces. The camera, because of editing, you can go from one story to the other with all of those different stories that we’re following."

That's why Marshall looked for actors rather than singers in these roles. The intricacy of the performance was so important to him, ensuring his cast could carry a tune was almost secondary.

"No one would know that I like singing unless they showered with me," Blunt laughed. "I do like singing, but usually not in front of people. So, I was a little bit reluctant to audition for Rob Marshall, because he’s like a musical god. So, you know, I was nervous. And I think we all were in many ways, but sort of emboldened by the fact that he said, 'Listen, I want actors, who can kind of sing.'"

Blunt and the rest of the cast recognize the creative power they have in bringing Sondheim to life with film. "Stephen Sondheim’s material is so incredibly complex and emotionally deep and tricky," Blunt said. "The Baker's Wife is certainly the role that challenged me the most [in my career]. It’s the role that has everything. It’s comedic, it’s tragic and conflicted."

All of that comes alive in a wholly different way through the lens of the camera. "It’s such a luxury on film to be able to capture moments, private moments, special moments in their faces," Marshall said. "Lyrics for 'Into the Woods' are so smart, so beautifully written by Stephen Sondheim. To capture that kind of thing in a close way, where you can really feel them ... you’ll never be able to get that kind of personal connection on stage."

And that personal connection culminates with the lyrics Obama unintentionally quoted. Marshall has since spoken at length about how he sees this as "a fairytale for the post-9/11 generation." It is with "No One Is Alone" that he harnessed the intimacy of the screen and set up his message of compassion through the words of Sondheim and Lapine.

"The intention of the musical is not necessarily to make you happy," Blunt said. "It’s to make you think ... It's dealing with loss and the need to move on, rebuild and regroup. And that amazing song at the end, 'No One Is Alone,' is the integral scene. You can go through these horrific times in your life, where life can just serve you a horrific hand out of nowhere, but you’re never really doing it alone. There’s always somebody there with you."