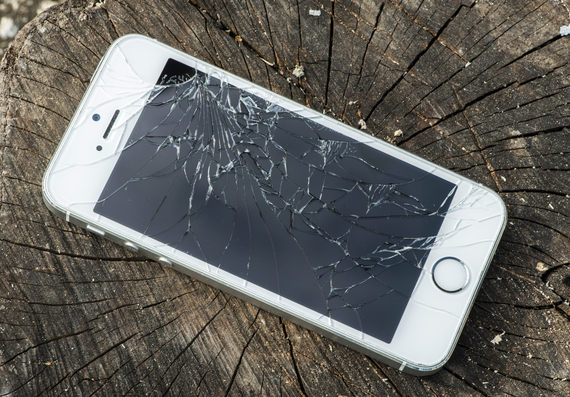 Call it the neon blue light of romantic discord.

Allow me to set the scene: It's been a long day. You lay cozily in bed with your partner. The alarm's set for the morning. You're beginning to drift toward that blissful Land of Nod...

And then, your partner's phone goes off. It's the visual equivalent of a sonic boom torpedoing through the bedroom. No sound is emitted but that neon blue light throbs insidiously, indicating the arrival of a text, causing your retinas to painfully dilate. My mind ignites with a rage of Biblical proportion.

Two thoughts run through my head:

2. Why can't you (i.e. dear husband) turn your phone upside down on the nightstand so our bedroom does not resemble a light show at the science museum?

I then proceed to share these thoughts with my spouse, indelibly altering the cozy atmosphere of the bedroom into one of marital strife.

Me: Who's texting you now?
Husband: Hmm?

That insidious neon-blue light flashes again. It's like lightening in a cave. I'm blinded.

Me: Are you seriously texting right now?
Husband: (Man grunts.)

No one can fall asleep.

Now I'm no saint either when it comes to phone etiquette. But like much else in life, I tolerate and justify my own bad behavior but gripe about it when I witness others engaged in that same annoying habit. Maybe my disproportionate reaction is Freudian. It's as if I'm trying to purge the behavior from my own repertoire. Yet I know that I can't so I berate my husband for the very thing I have trouble controlling myself. To think we're in control of our phones is a laughable delusion. They control us in ways we can't even fathom, leading to some etiquette issues. I call it i(ntolerable)Phone behavior, otherwise known as its cousin, BPA (Bad Phone Activities). It's just as poisonous to relationships as plastics are to the body.

Now I'm not alone in my feelings about BPA. NPR reported in December that "70 percent of women in a recent survey said smartphones were interfering in their romantic relationship." The psychologist and associate professor at Brigham Young University, Sarah Coyne, created the term "technoference" to describe the disruption that digital devices cause. Perhaps it's one of those disjointed, jarring, identity-crushing paradoxes that are the hallmarks of modernity. People untethered to devices recognize that these sleek machines turn device carriers into zombies. But when the sleek device returns to our grasp we can't un-zombify ourselves, even though we recognize device zombification in others.

That NPR segment made me realize why BPA bothers me: It's exclusionary and ultimately jealousy- and anxiety-provoking since so much attention is directed at the device yet others can't easily witness what's so captivating about the contents on the screen. In other words, since I can't see who my husband is texting, he must be texting with some super hot model and not, in actuality, with his buddy Frank. They like to text about movies. A lot.

What makes one's relationship with the phone so different from other exclusionary activities - like reading a book or watching TV or playing video games - is that the smartphones give surreptitious urgency to trifling matters. From an observer's perspective, the phone-tethered individual is often stopped mid-hallway, hunched and stooped over the chrome device, smirk on face and fingers a-flying to convey some type of message to some unknown source.

But what is so important and smirk-inducing that it puts all other activities on hold and requires this person to do so in the middle of the hallway? And why does it prompt me to feel so excluded, when my husband is likely texting Frank and not setting up a secret rendezvous with Mystery Hot Woman?

In an effort to remedy this dynamic, I've now started telling my husband what I'm doing on my phone, hoping to include him in the exclusionary activity and set an example for a more harmonic device interaction.

"I'm Googling the hours of the cheese shop," I tell him, my fingers swiping away. Or, "Lemme text Eve to let her know we're running late," my shoulders hunched forward in the notorious texting pose.

Cool, says the husband -- eyes glued to his phone and fingers swatting at the keys. He doesn't follow my lead so I have no idea what's happening between him and his screen. It's either Frank or the super hot model who awaits a text.

Ph.D. Assistant professor. Essayist, omghinda.com. I write on gender, power, scandal and politics. My book is "Scandal in a Digital Age."