Online video conferencing is becoming more popular. Video is being used for more than conferencing too! One of the most well-known live streaming video platforms is on Google+, called Hangouts. Since this technology is so new, many people get frustrated by the fact they don't know how to use it. As someone who's been using Google Hangouts for over 18 months, I am often asked to help people understand Hangouts. Here's an intro to Google Hangouts.

There are actually two different types of Hangouts: Hangouts and Hangouts On Air

Hangouts are typically used for private video chats with another person or group of people. They are not recorded to YouTube and only visible to the people you invite to them.

Hangouts On Air are publicly viewable and automatically recorded to you YouTube channel associated with your G+ account. You can invite individuals or circles to join the hangout and up to 10 people (including you) can be on at one time. You can not invite the public to join on air, but by default, they are able to be viewed by everyone.

In this video, we cover everything from starting a Hangout On Air to embedding it on your site.

In addition to hosting my own Hangouts On Air, I'm also the community manager at HuffPost Live, where the majority of our guests join us using Google Hangouts. I use Hangouts more than I use my phone to talk to people. If you have any questions or want to learn more, please leave a comment below and I'll try to address it. 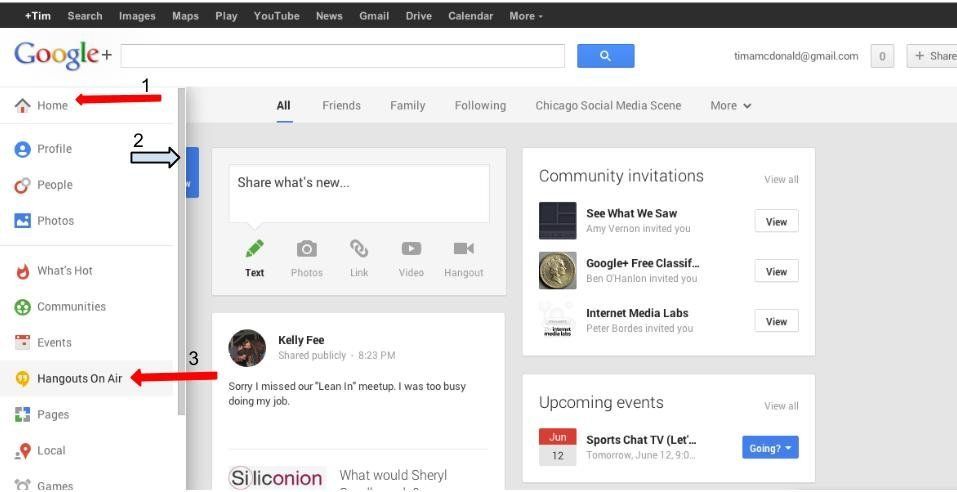 1 / 5
G+ HOA How To Get There
Click on the "Home" icon in upper left corner. The left sidebar will now be displayed. Scroll down and select "Hangouts On Air"