Evangelia Gousiou is an amazing electronics engineer who keeps a low profile in spite of her amazing work at CERN, the European Organization for Nuclear Research. She is a major contributor to CERN's Open Hardware Repository, which sounds exactly as wonderful as it really is. Evangelia took some time from her busy schedule to interview with me. 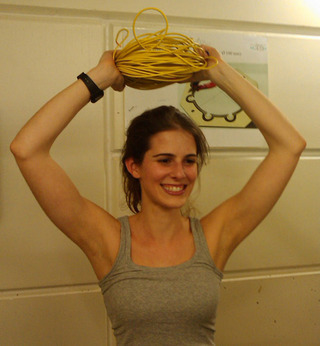 What is your title at CERN?

No pun intended, but what sparked your interest in electronics engineering?

EG: I started working in IT, and then I joined CERN. I ended up working more with electronics, and I discovered I'm more interested in hands-on work and hardware, rather than IT and software.

It was the hands-on part that really interested me. When I joined CERN, the types of projects I initially worked on had many different components (i.e. programming, research) but I was more interested in working with the hardware itself.

And open source hardware and software?

EG: I got into the world of open source hardware at CERN. The team I'm working with now encouraged me. Javier Serrano, the father of the Open Hardware Repository at CERN is the leader of the team I'm working for, and he is a very inspiring person. A lot of people on my team are talented, amazing geeks, and they're all very into alternative developments. [laughs]

It is a very inspiring atmosphere.

Can you describe a few of the projects you are working on that you are very excited about?

EG: The most exciting aspect of any project is when you develop it and you deliver it to the users... and then after a period of time, you get their feedback and they're happy with what you have done.

One of the biggest projects I'm working on is the nanoFIP [an industrial communications system]. It was developed for CERN, and a lot of them are going to be installed into the Hadron Collider. One of the best things working on this project is hearing back from people who've used this communications protocol. Recently we got an email from a train company in South Africa who is using this protocol in their station!

I'm curious about the White Rabbit Network. What is it? What inspired the project? Who is involved in it?

EG: I didn't develop it, but I'm about to use it. It was developed for use by CERN because they needed to upgrade one of the old timing systems, and there was no other available solution. The White Rabbit was developed as a timing system [for experimental physics facilities] that is able to synchronize about 1,000 nodes with sub-nanosecond accuracy over fiber optic cable lengths of up to 10 km. It is a fully deterministic Ethernet-based network for the general purpose of data transfer and synchronization.

It's the next big thing in Ethernet-based synchronization!

Just out of curiosity, what is the academic climate like in Europe with regards to women in the sciences? Do you have many female colleagues?

EG: I'm very happy you are asking this question, since this is something that affects all of us every day. The interesting thing is that they are encouraged to hire women at CERN, but in my group, there is about 5-10 percent women [engineers], whereas at the University level, it's about 30 percent, and it's even worse the higher the position is. I have personally witnessed that some women aren't confident to apply for higher positions... or maybe because they are less confident in their abilities, they don't convince people to hire them.

I think there is a lot of work to be done to increase diversity in the sciences and technology. I think that this is something that should change in schools, beginning at a young age. Younger students, especially females, should be encouraged [to pursue math, science and tech related fields]. I really think it is important because the results of a diverse team are proven to be better... diversity in gender, nationality, culture, and class background...

I ask because in the U.S. there are a few initiatives to get more students involved in science, engineering, and mathematics, such as STEM (Science, Technology, Engineering and Math) and there is a specific focus to get more women involved in these fields.

How would you encourage people to get involved in hardware projects, or hardware hacking?

EG: Be part of an inspiring team and project. Going to places, organizations, and conferences where you can meet like-minded people, like the EHSM.

For more information about Evangelia's projects, check out her portfolio of projects for CERN's Open Hardware Repository on the OHR website.

If you are interested in more projects like Evangelia's and others that push the frontiers of DIY and open source technology, join us at the Exceptionally Hard and Soft Meeting (EHSM). The EHSM is taking place this year at DESY in Hamburg, Germany from June 27- June 29th.