By now, the 40% of food that's wasted in the US is a widely accepted figure. However, the calculations behind it leave out a very important part of the food system: farm-level food waste. It turns out, that a significant amount of healthy, nutrient-dense fruit and vegetables is left unharvested in farmer's fields, never reaching the food supply. Because our agricultural system relies on many individual growers feeding into multiple supply chains, and because it is difficult and expensive to travel to area farms to measure losses that are often farm-specific and non-generalizable, many food waste studies just don't mention farm-level waste.

Growers never use the term "food waste". Food that doesn't leave the farm is called unmarketable, oversupply, surplus, culls, seconds, trash, or sometimes, ugly. No grower wants people to go hungry. In fact, just the opposite is true. The intent in growing a vegetable crop is always to sell out, but growers' only means to hedge against weather, disease, and other unforeseen risks is to overplant, in order to get the high quality vegetables they know they can sell. Vegetable growers are not subsidized, nor are their crops typically insurable. Those schooled in food waste will notice this means the suggested waste prevention methods from the US Environmental Protection Agency's Food Recovery Hierarchy are not well-suited for the farm level.

Growers are not required to report losses, and many "postharvest loss" studies today still carry forward estimates that were generated in the 1960's. However, nearly everything - from farming practices to the varieties planted - has changed since that time. The 2016 ReFED (Rethink Food Waste through Economics and Data) report estimates that 20.2 billion pounds of produce never reaches the supply chain. This figure is based on an average of grower estimates, forming a murky picture of losses that are highly dependent on crop and market. Right now, though, it's the clearest picture we have. In the 2009 book Waste: Uncovering the Global Food Scandal, author Tristram Stuart declared that "the exact quantity of waste from farms is the biggest unknown of all waste statistics." 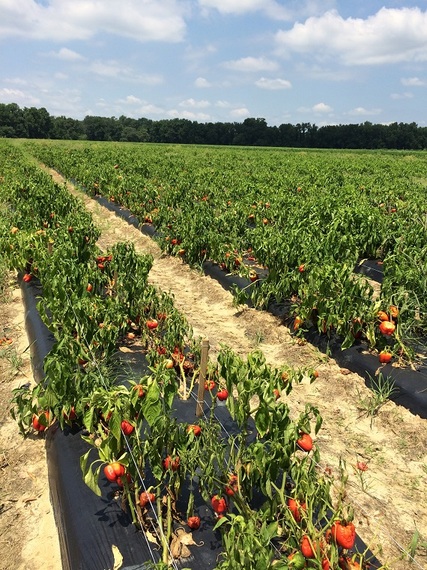 From the growers' perspective, there comes a point in the season when it is no longer economically feasible to harvest the crop. Vegetable crops are harvested from one to a few times, depending on the crop. As the season progresses, the price drops dramatically. At the same time, the plants age, harvest traffic can damage the plants, disease can set in, and it becomes harder to find marketable quality. Harvest costs like labor, sorting, packing, and packaging stay the same or start to increase. When the economics dictate, the grower calls off the harvest, regardless of what's left.

It's easy to see how the economics might not add up. Growers face rising costs all the time, such as fertilizer and chemical costs, or even water, when irrigation is required, Now, the implementation of the Food Safety Modernization Act is likely to add additional costs for growers. Typically, brokered produce sales from mid-sized farms leave the grower with cents on the dollar, even though fresh produce is still too expensive for some consumers.

There are a whole host of reasons why a perfectly safe, nutritious crop may be left in the field, and a combination of reasons is common. Timing and weather are critical when it comes to producing a crop. Pollination may have failed due to poor weather, leading to misshapenness; a nutrient deficiency could have produced a discoloration; or there could be minor pest damage that doesn't affect the quality of the vegetable itself.

Cost can be a big factor in donation practices. Getting the crop out of the field is the expensive part. If something reaches the packinghouse that doesn't have an immediate market destination, many growers are happy to donate highly perishable produce. However, they cannot afford to harvest a crop for the purpose of donation. Additionally, transporting a donation off the farm is often not feasible.
Food waste research has traditionally focused on the wholesale supply chain, retail, restaurant, and consumer levels, leaving the farm out. Some pressing farm-level questions include: how much edible produce is left unharvested, why does this happen, and how can it be recovered efficiently and economically? New research underway by graduate student Lisa Johnson at North Carolina State University with the Center for Environmental Farming Systems (CEFS) is tackling these questions.

Qualitative research with growers has demonstrated that they have no way to easily measure the amount of marketable and/or edible produce that is left in their fields. CEFS research has created straightforward protocols that enable growers to take a sample and extrapolate what is in the field that might be marketable - informing their decision on whether to make another pass through the field - and what might be edible, fueling a decision on donation. Early results indicate significant amounts of marketable and/or edible produce are routinely left unharvested. For example, an average over several fields suggests over 12,000 pounds of cucumber per acre (86,398 servings), and over 4,000 pounds (25,919 servings) of sweet potato per acre may be available for recovery.

Now that we've developed a way of estimating edible and marketable food left over in farmers' fields, and begun to understand what leads to it remaining unharvested, the next step is developing economically-viable ways of harvesting that food - getting it out of the waste stream and into the food supply, on its way to being eaten. Stay tuned, because we're working on that now. Reducing waste means efficient use of resources, which will make our farms - and our food system - more sustainable.