The ongoing slaughter of rhinos and elephants for the illegal trade in rhino horn and ivory is such frequent and terrible news that when good news arises, it is worth celebrating. That makes us happy to announce the naming of a baby Southern White Rhino at Kenya's Ol Pejeta Conservancy in honor of Ringo Starr. 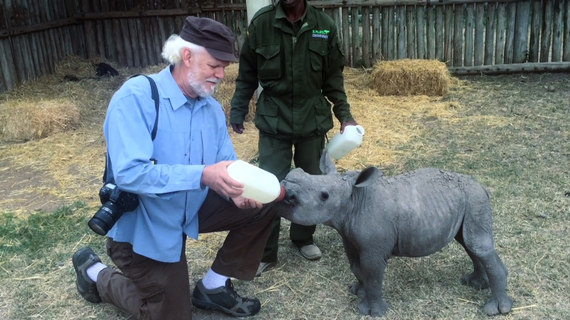 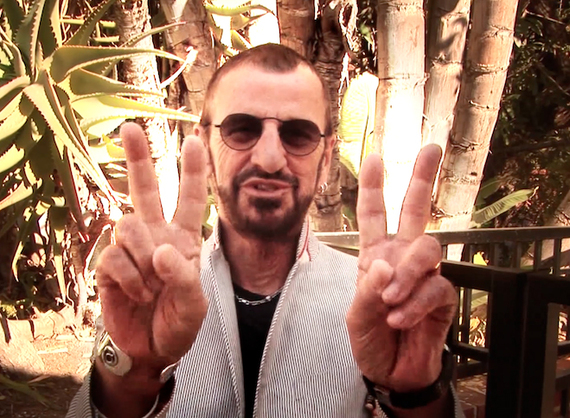 So here's how a baby rhino comes to be named Ringo, and a little of what we hope that will accomplish.

In January I was filming with the conservation teams at Ol Pejeta Conservancy in Kenya, whose broad array of projects include a chimpanzee sanctuary established with Jane Goodall, armed anti-poaching teams and formidable K-9 units, and community partnerships that support local communities and enlist their help in the battle against poachers. Ol Pejeta is also home to the last three Northern White Rhinos in the world and the largest group of black rhinos in East Africa, 109 of the estimated 2,500 in the world.

While I was filming, I was introduced to a recently rescued southern white rhino who'd been found in late October at age 2 weeks, abandoned and barely alive. Now 3 months old, the quickly growing baby is cute, rambunctious and healthy, and seemed to me like the poster child of an entire species under threat.

The baby rhinos lead caretaker Zachariah, who I knew from a previous rhino project, told me the baby would need nearly constant care for the next three years before being released into the wild. All that care is expensive, about $1,000 a month. Our education and conservation nonprofit The Nobelity Project volunteered to be the first-year financial sponsor of the little rhino. Asked to name the baby, we debated between a traditional Kenyan name versus a name that might help bring attention to the loss of 90 percent of the world's rhinos.

I thought immediately of Ringo Starr whose love of rhinos made him a great fit for this beautiful baby. Three years ago, to help bring awareness to the battle against poaching, Ringo changed the main page of his website to the photo of a baby rhino. With Ringo's name, this baby rhino -- and many others -- might have a little better chance of survival.

I was just a kid when I first I saw the Beatles on the Ed Sullivan show, but I knew from the start that Ringo was my guy. Many years later when I first met him, I was filming an interview with Ringo at Willie Nelson's Farm Aid concert, and was so nervous I could barely talk. I'm still more of a fan than a friend, but Ringo has been a great friend of The Nobelity Project and often sends his video message of Peace and Love for our annual Feed the Peace Awards in Austin. He's also supported our work by signing vintage Ludwig snare drums that we've auctioned at the event to support our conservation and education work.

The idea of a rhino named Ringo seemed like a nice tribute to my favorite Beatle and an opportunity to bring awareness to Ol Pejeta's multi-faceted approach to stopping the slaughter and saving every rhino we can.

Much to our delight, Ringo Starr replied that he'd be honored to have a baby rhino named after him and could help us spread the word. 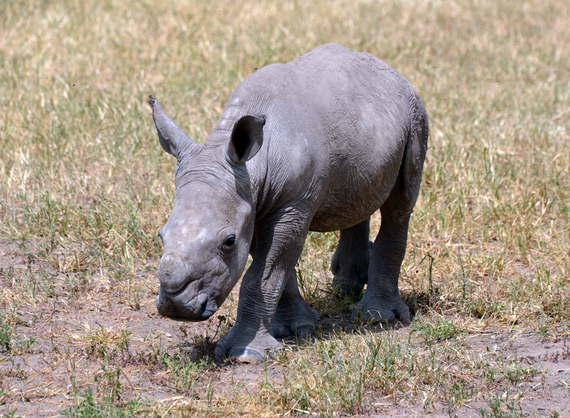 So why is this good news? Well, for starters you're reading a story about rhino conservation that doesn't totally suck. Ideally that motivates you to watch my short video on the baby -- he's pretty darn cute. Faster than most humans, when he runs in a gallop he often has all four feet high off the ground. Freeze the shot and he looks like he's flying. Perhaps his beauty will carry enough inspiration and good news to help counter some of the bad, and eventually for word to reach the uninformed consumers of rhino horn that they are the causing the slaughter one of the greatest species on earth. 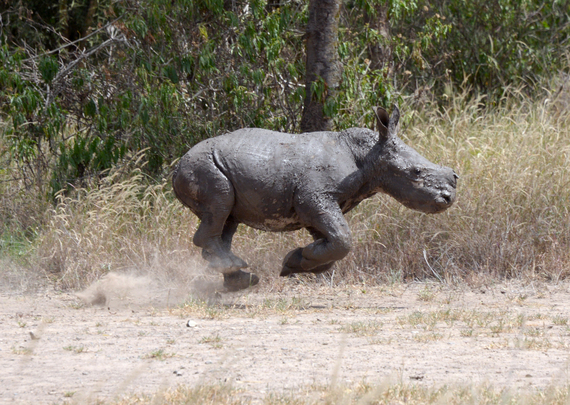 Unfortunately the bad news on both rhino and elephant poaching is seriously bad, and changing the balance to the good is not happening nearly fast enough. The most reliable current study estimates 100,000 African elephants were slaughtered in just three recent years. An estimated 24,000 of those elephants were killed in East Africa where The Nobelity Project's work with schools often makes us frequent witnesses to key conservation issues.

The plight of rhinos is arguably worse. In South Africa, a rhino is killed by poachers every 8 hours. Over the past 40 years, black rhino populations have been decimated from an estimated 65,000 to that current number of 2,500. The tendency among the general public is to blame the small-time poachers, many of whom are desperately poor and who risk the most while profiting the least in their illegal kill.

Poaching is both a global issue and a local one. The illegal trade in rhino horn is built on growing international trade and increased illegal trading routes. And it is driven by the demand for rhino horn in Asia, primarily in Vietnam and China where sellers pitch it as a cure for hangovers or even cancer, and where consumers often view it as a symbol of their wealth.

All of it is madness built on a lie. Like all status symbols, rhino horn is a fake - a false god. There are no medicinal benefits to ingesting rhino horn, which is merely keratin. And the only creature on earth who benefits from rhino horn is the rhino who grows it for defense and for mating preference.

There is no single answer to stopping the illegal trade. Ol Pejeta does what it can to protect the rhinos there -- no easy task as increasing penalties against poachers also increases the potential risk to rangers who protect the rhinos. Improved equipment and technology for rangers and for tracking is being deployed and more is needed. Support from local communities to identify the arrival of someone offering to buy a horn is important. So is environmental education of local and global communities. Increasing the capture and prosecution of criminals in the full chain from killing of a rhino, through international smuggling to dealers and buyers will have to improve.

That's an intimidating list to millions who merely want to see the slaughter stopped so that rhinos and elephants will be here future generations. But wanting is not going to be enough. Many voices have been heard. Many more will be needed to turn the tide. In the meantime, the smallest voice sometimes sounds the loudest. Take two minutes and watch the video of Ringo the Rhino and listen to his lovely little squeak of a voice.

Between the joyful cheer of Ringo Starr or that tiny squeak of Baby Ringo, the rhinos have two new voices. And that's a start.

Learn More about The Nobelity Projects conservation films and work for Education for All at:
www.nobelity.org