Sympathetic articles, books and lectures aside, introverts -- or those with the so-called "quiet" personality type -- may still feel misunderstood in a society that champions extrovert traits like non-stop connectedness.

We rounded up expert insight and responses from The Huffington Post's social communities on the biggest sources of misunderstanding for introverts. Below are just a few things they wished everyone grasped about the personality type. 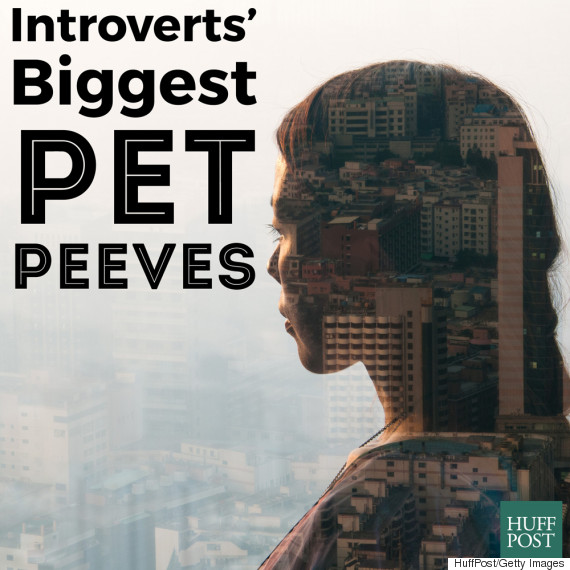 1. They don't hate a good party.
Introverts aren't a bunch of awkward killjoys who don't like to have a good time. In fact, many introverts enjoy going to parties if it means interacting with people who make them comfortable.

What can be so grating about large gatherings is the overstimulation and unsatisfying conversations. As Laurie Helgoe explained in her book, Introvert Power: Why Your Inner Life Is Your Hidden Strength, introverts feel exhausted by small talk and prefer more intimate conversations.

2. Craving downtime doesn't mean they're anti-social.
Introverts need time to recharge, but they still want to be with their friends after they've snagged that alone time. They're not anti-social; they're selectively social.

"Just because nine times out of 10, I decline your invitation, does not mean I want you to stop inviting me," said reader Carolyn Mae Ladas on Facebook.

3. They're not open books (and that's perfectly okay).
Introverts rarely spout off the first thing that comes to their minds. This quiet reflection is a hallmark characteristic of the personality type and is quite the opposite of their extroverted counterparts, who speak their thoughts affirmatively and quickly.

"I wish people could understand that I don't feel their need to over share every little detail of my life," said reader Claire May Sarlandie-Partiot on Facebook. "If I want to talk about it, I will. If I don't, don't push me. It will only make me close like an oyster."

4. Personal space is highly valuable to them...
Introverts are more likely to opt for the aisle seat rather than the middle to avoid being surrounded on all sides, HuffPost's Carolyn Gregoire previously reported. This allows them an opportunity to remove themselves from a situation in order to recharge if they need to.

5. ...But yes, they'll give you a hug.
You just have to ask them first. A comic designed by artist Roman Jones sums up an interaction with an introvert perfectly: Let them invite you into their "bubble."

6. Just because they're introverts doesn't meant they're shy...
Shyness and introversion are often used synonymously, but as introverts are quick to point out, they're not the same thing. Introverts don't always fear social settings, they just place value in more meaningful, smaller interactions -- and they're perfectly fine with remaining in that comfort zone.

"My shell is comfortable, and because I like staying there doesn't mean I'm shy," explained reader Jeremy Flowers on Facebook.

7. ...Or stuck up, for that matter.
A quiet demeanor does not equate to a haughty attitude. When introverts don't overly contribute to a conversation, it's usually because they're being more observant than participatory.

"Me being quiet has nothing to do with you. It doesn't mean I am being rude, it doesn't mean I am snobby... It's nothing I can control and though I am very aware of it, I can only push myself so far until I'm past uncomfortable [and] tolerable," said reader Brittany Pettus on Facebook, adding that she's even been called names for being quiet.

8. They don't want to be more outgoing.
Many people look at introversion as a character flaw, when in reality, introverts like their quieter demeanor -- and have no interest in changing.

"The cure for being an introvert is not to become an extrovert. Some of us would never want to be extroverts," said reader Lori Armstrong on Facebook.

9. They approach the workplace differently.
Introverts are typically averse to open office plans and sometimes can experience challenges navigating an ideal working environment. Finding quiet spaces, only attending crucial meetings and having routine check-ins with co-workers can help ease those office roadblocks, according to Susan Cain, author of Quiet: The Power Of Introverts In A World That Can't Stop Talking.

"I tend to shrink back in work meetings where multiple people are brainstorming out loud, but that doesn't mean I don't care about the topic being discussed or that I'm not paying attention," explained reader Marisa Hoheb Fedele on Facebook. "I just need some quiet alone time to mull over my thoughts before I present them to a crowd."

10. They're not the biggest fans of phone calls.
When looking for a technology-driven conversation, opt for a typed message (bonus: there's even a set of texting emoji on the horizon made specifically for the personality type). Out-of-the-blue phone conversations tend to feel intrusive to introverts, which may result in them screening your call.

"Talking on the phone can be a form of torture. I choose to engage via text or chat for a reason," said reader Cindy Spreg on Facebook. "Please don't take offense that I'll text you back rather than call you. It's not you, it's me!"

11. Surprise birthday gatherings are the worst.
Big parties where introverts are the center of attention = A big no-no.

"I do NOT want a large birthday party!" reader Jackie George explained on Facebook. "I'd much rather have my few close friends for a quiet evening of games, wine and conversation than have a room full of people I barely know centered around me. Ack!"

12. They have an intuitive nature.
Introverts tend to be in tune with their surroundings, and as a result they may pick up on subtleties of conversations and moods that their louder counterparts may not notice.

"Introverts are very observant," explained reader Cora Donnell on Facebook. "If we don't like your friends it's because we can see through their act."