We've lived in our house in San Diego for several decades now and have never seen a single duck. Seagulls? Tons. Pelicans? Loads. But all of a sudden, my husband looked up from his desk a few weeks ago and said, "Do you hear quacking?"

We quickly discovered that a mallard pair, whom we dubbed Quick and Quack (a nod to NPR), had decided to make our pool their personal lake.

Our dog, Winston, of course, went nuts when he saw them but they were (literally) unflappable. "Have at it, big boy," they seemed to say with barely disguised ennui.

At first we were totally charmed by them. Ducks! How fun! But by day three we couldn't help noticing that our pool area and the pool itself were sporting alarming amounts of duck excrement giving new meaning to the term "poop deck." With regret, I called a local wildlife agency for advice about their relocation.

I quickly discovered that wildlife agencies see ducks differently than pool owners. My wildlife person surmised that they had created a nest somewhere in our back yard. What luck! she said. Baby ducks are so cute!

I nervously inquired about the gestation for duck eggs. Twenty-nine days, she said. I thought I could probably live with 29 days of ducks until she added, "and then another 10 weeks until they can fly." Definitely, she says, have to keep the dog out of the back yard once the baby ducks are born. And by the way, we'll need to put a wood plank at the shallow end of the pool so the baby ducks can get out.

I said, what if the toddler grandchildren want to come and swim? And she said, "Oh, they'll just love the baby ducks!" One got the impression she was seriously focused on the innate adorableness of infant avians and not on (1) we were housing a duckling-eating dog, (2) we employ a lawn moving service with 130 decibel mowers incompatible with baby ducks, and (3) we (sort of) have a life.

At first the wildlife lady had an ally in my husband Olof who was really into the whole miracle of birth thing. That was until he heard that a typical clutch is 12-13 ducklings. Even he had to admit that 15 ducks pooping in our pool for 10 weeks was going to be a biohazard from which we were not likely to recover. It was also mentioned that once you make the ducks feel at home, they come back every year in perpetuity.

When the pool guy showed up the next week he nearly collapsed on the pool deck weeping when he saw the pool. Ducks, he maintained, are harder to get rid of than herpes.

"Can you actually get rid of herpes?" I said.

"No!" he practically sobbed. "And you can't get rid of ducks either!"

He'd had two other clients with "duck issues" in which they'd tried everything under the sun (other than a .22). Makes the pool very hard to clean not to mention extremely unappetizing to swim in. He said we'd look back on our rat problem as good news.

It appeared after two weeks that the ducks didn't actually have a nest here; they just liked the locale. I quickly learned that we're hardly the first people around here to have this problem. No less than the pricey piscine of the venerable Beach and Tennis Club has been mallardially afflicted. The Internet was full of duck eradication ideas, like buying a six-foot long plastic alligator pool toy to float on the pool. But this suggestion was followed by 24 posts of "Doesn't work" and even one photo of ducks floating on the alligator.

Many of the suggestions required crisscrossing the pool with fishing line or rope so the ducks couldn't access the pool. But you can't either. Dozens of other non-lethal suggestions involved bright shiny objects, fake snakes, a product advertising itself as "a secret blend of herbs and spices that will naturally remove ducks" but which probably contains strychnine, and even hiring a falconer. I had a feeling the falconer was out of our price range.

Ultimately I went low tech: the hose. At first I just sprayed a shower in their direction but they just swam over and preened themselves in it, as if to say, "OK, a little to the left." So I turned it on a little stronger and splashed it as close to them as possible without hitting them. I refused to hurt them--just wanted to ask them politely if they would relocate elsewhere, thank them for stopping by. They took off immediately but I heard telltale quacking in the pool 10 minutes later. They seem to be reappearing less and less, however; days go by that we don't see them at all. In some ways we'll miss them. But we have a whole lot of duck poop on the deck to remember them by. 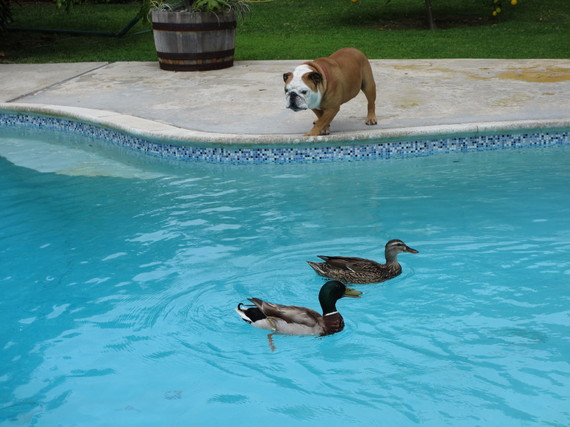