What do you get when you combine fashion, New Orleans whimsy, and a semi-aquatic rodent of unusual size?

You get the Nutria-Palooza, an exceedingly strange but enlightening event, held Sunday, November 21 in Brooklyn, NY to raise awareness about the invasive species wrecking Louisiana wetlands.

"I think that this was man's fault that they are populating the wetlands," says Goat, a designer by night and sound technician by day who contributed a riverboat captain's coat and hooded jacket to the fashion show. "It's our job to make them go away."

It's too plentiful for alligators to handle, too unpredictable to be a pet, and bad news for the native muskrat, which it is handily displacing. It creates great swaths of open water called "eat outs," munching on native vegetation down to the roots and contributing to massive erosion to the tune of 25 square miles a year.

Nutria fur was popular in the first half of the century, seen on the shoulders of starlets like Greta Garbo and Sophia Loren. Native to South America, it was brought up to Louisiana in the 30s to breed for the fur industry. In the 40s it was introduced again to control another invasive species, the water hyacinth, which was choking the wetlands. Like any invasive species, it took well to the habitat, and as fur fell out of favor, the nutria population exploded.

Louisiana is doing its best to combat the estimated 20 million giant rodents with a bounty program that awards $5 for every nutria tail brought in. The program is the most successful to date, with 455,000 killed last year. Unfortunately, with nutria meat struggling to gain acceptance, and the fur worth little to nothing, the carcasses are left behind in the swamps to rot.

Enter Righteous Fur, an effort by Cree McCree, an environmentalist and designer from New Orleans, who bills the fur as guilt-free. The effort surprisingly includes vegans and vegetarians among its ranks of designers, who reference Native American philosophy in seeking to honor the nutria by using every part, including the wicked canine teeth.

Of course, that doesn't mean the designers have forgotten that it's a dead animal. One outfit at Nutria-palooza had overt references to the death involved in its creation, with tiny, hand-carved skulls running across the shoulders.

"New Orleans has a certain macabre to its spirit," Goat says in reference to the unconventional designs. With a mixed history of tragedy and comedy, the city is the perfect setting for a project that acknowledges destruction while having fun with the motif. After two sold out shows in New Orleans, McCree took the show up to New York City, trying to spread the word.

Hopefully this project will be somewhat more successful than the government's push to make nutria meat popular, a $2 million effort that didn't change any minds about the low-fat, high protein meat that tastes like "chicken, but worse," according to one school kid interviewed in the kitschy 2002 documentary shown at the event. (Ironically, the chef hired to promote the nutria has been hired to combat another invasive species, the Asian carp.)

The New York Times reports that the fur is starting to gain a foothold, showing up not only on Etsy, but also on designs by Oscar de la Renta and Marc Jacobs.

As the models walked the runway, some in serious fashion, others in playful garb (the finale was a bayou bride done up in lace curtains and nutria fur, ready for her shotgun wedding) there was a hint of desperation underlying the event. If Louisiana can't get a handle on the massive erosion of wetlands from nutria, development, and other problems, then New Orleans and other coastal areas will have some serious problems to contend with down the line, including more flooding.

So you environmentally aware animal lovers, you have difficult choice to make: will you succumb to the Righteous Fur's siren call and embrace the "recycling" of the unwanted pest? Or is this cruelty all dressed up?

Check out the photos from the event and let us know what you think! 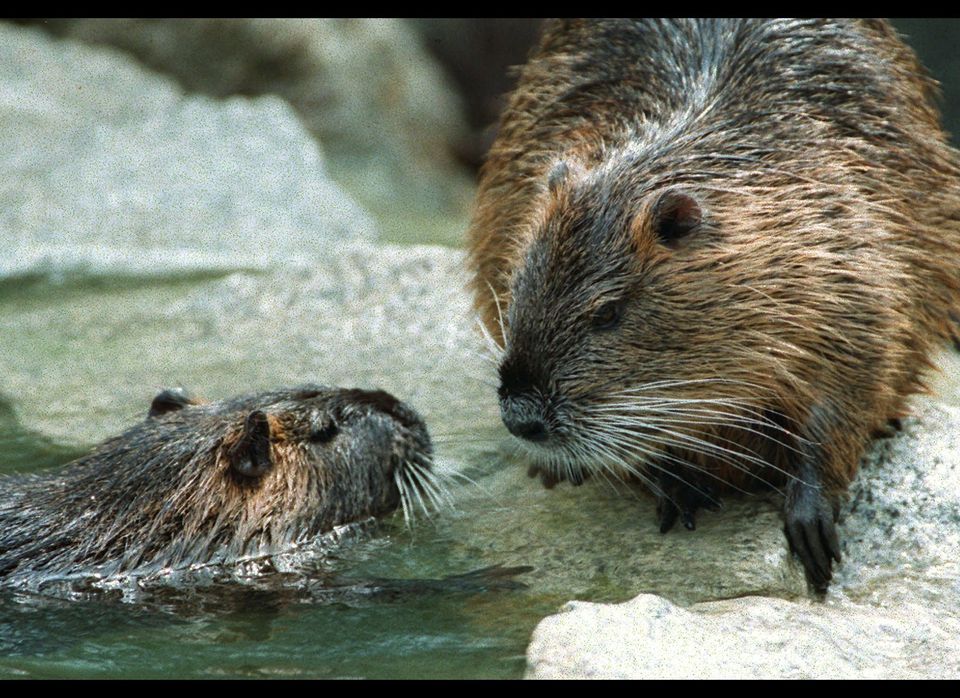