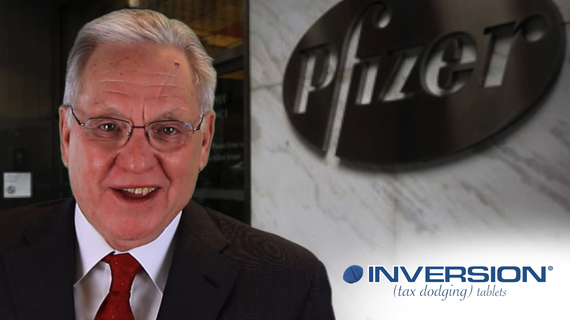 Today, in honor of Tax Day and to highlight corporate inversions and other tax-dodging schemes, American Family Voices, Americans for Tax Fairness, and the Agenda Project Action Fund launched a video parody entitled "Inversion, from Pfizer, the Makers of Viagra." Now, I may be biased -- I'm the president of AFV -- but I think that any time you can make a video that combines policy with penis dysfunction pills, you have a winner!

Here's what inspired the ad. The pharmaceutical giant Pfizer was trying to merge with Ireland-based Allergan in what is called a "corporate inversion," in order to save up to $35 billion it currently owes in U.S. taxes on its offshore profits. Pfizer scuttled that plan, at least temporarily, when the Treasury Department and the IRS issued new rules governing such mergers, which closed off some of the major tax benefits. However, these new rules did not close the inversion loophole.

Our groups are urging supporters to tell the Treasury Department and Congress to close the inversion loophole permanently, and to require all American corporations to pay the taxes they owe. This video is part of a broader coalition effort encouraging supporters to submit comments to the IRS in support of the new rules.

Now, while I had a good laugh at this video -- and I think you will, too -- corporate inversions are no laughing matter. Corporate inversions and other tax avoidance schemes may be good for corporate bottom lines, but they are bad for America, robbing the U.S. Treasury of badly needed funds and placing the bulk of the tax burden on hardworking Americans like you.

Check out our parody and please share it to help us build the pressure on corporations like Pfizer to pay the taxes they owe: