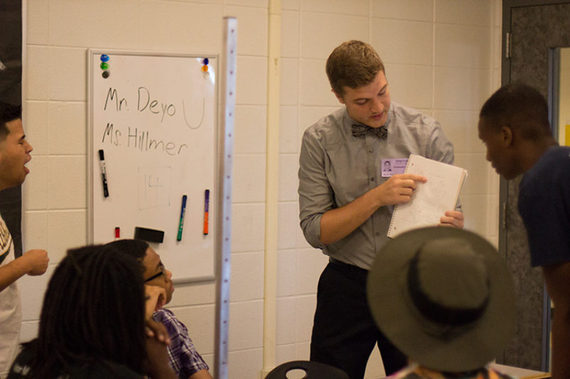 In calculus class, you'd never use the phrase "star student" to describe Chris Deyo. He was slow to complete assignments about strange-sounding concepts like solids of revolution and related rates, staying behind to get extra help as his classmates jeered that the subject just "sucks." To them, all they needed to know was enough to pass the test. After several after-school sessions, Deyo learned upper-level math well enough to tutor his peers. But instead of teaching straight out of the thick textbook like many teachers do, he showed how the lessons related other subjects. "The same kids who were saying they hate math could do it and were good at it when taught in a method that they identified with," he noticed, causing him to wonder, "Is it really math or the way we're teaching?"

Feeling accomplished, Deyo headed to the University of Texas at Austin with the thought, "I love [teaching and math] so much, I should try to make a living out of it." There, he signed up for UTeach, a national program training math and science majors to become high school instructors. After graduating from UTeach last spring, Deyo began teaching math at a charter school in Austin. Frequently seen wearing a bowtie, the 23-year-old Deyo doesn't look much older than the seniors in his calculus class. But he hopes to get them interested by teaching in ways that suit them, rather than just lecturing to teens that have tuned him out already. "From a young age, I realized those are the teachers that are making a difference," he says.

Bored and intimidated by math and science, American teenagers are disengaged from the classes that prepare them for today's tech-driven labor force -- making UTeach needed now more than ever. The United States ranks a disappointing 35th in math and 27th in science out of 65 countries. Recruiting STEM (science, technology, engineering and math) majors who often arrive at college with no intention of teaching, these undergraduates "represent the most promising pool from which to draw future teachers," says Kimberly Hughes, director of UTeach Institute, who expanded the UTeach model from eight Texas colleges to 35 more partner universities nationwide.

No high schooler is eager to do math problems without end, which is why UTeach trains its teachers to create hands-on, collaborative, real-world projects (a teaching method dubbed "project-based learning") that are exciting to both educators and pupils. Recently, instead of solving systems of equations on the whiteboard, Deyo divided his class into groups and asked them to develop the problems themselves. Groups came up with equations that involved splitting pizza, controlling the amount of money spent on clothes and even comparing Spotify, TIDAL and other music-streaming services. "We try to be a student-led program, where students are taking initiative for their own learning," Deyo says, speaking with a fast cadence, the enthusiasm about his students emanating in quick sentences. "They are coming up with the questions they want to answer."

In response to the shortage of STEM professionals in our country, UTeach has already certified 2,676 instructors and is certifying 6,280 more in the next four years -- just one of many ways it's placing valuable 21st-century skills at the center of today's education.

Case in point: Manor New Technology High School, a secondary magnet public school in Manor, Texas that employs only UTeach educators for math and science classes, is using project-based learning to instill a love of STEM in an unlikely student body. Unlike most STEM-focused magnet schools, Manor New Tech opened in 2007 to provide 21st-century-learning skills to economically disadvantaged minority students. These teenagers are statistically expected to be behind their white peers in in biology (26 points for blacks, 16 for Hispanics), as well as in algebra (13 points for blacks, four for Hispanics). Yet, Manor New Tech eradicates the achievement gap to match state test scores in math and far exceed them in science, despite comparatively lower scores in the surrounding district.

Impressive? Yes. But for schools nationwide to replicate those results, a huge influx of passionate STEM educators is desperately needed. UTeach-trained instructors staff at least 1,120 schools in 34 states, but 43 states and the District of Columbia are short math or science teachers. Filling that gap will only happen as UTeach expands, Hughes believes. "Leveraging the universities in our country as places from which to prepare excellent math and science teachers is key to addressing the shortage of teachers nationwide," she explains.

Statistics tell the numerical story of UTeach's impact. But Deyo's ability to convince math- and science-loving young people to be teachers is how the program truly creates a lasting impression. Problem solving ignites a passion inside Deyo, but more than that, he loves "seeing other people appreciate and fall in love with math and see the value in it. That's what makes me want to teach."

"Math, as a whole, to me is one big puzzle," Deyo says. There may be one final right answer most of the time, but there are so many ways to arrive at it. UTeach may not be the only way to improve STEM education in America, but it's clearly one of those vital pieces.

This article is part of the What's Possible series produced by NationSwell and Comcast NBCUniversal, which shines a light on changemakers who are creating opportunities to help people and communities thrive in a 21st century world. These social entrepreneurs and their future forward ideas represent what's possible when people come together to create solutions that connect, educate and empower others and move America forward.