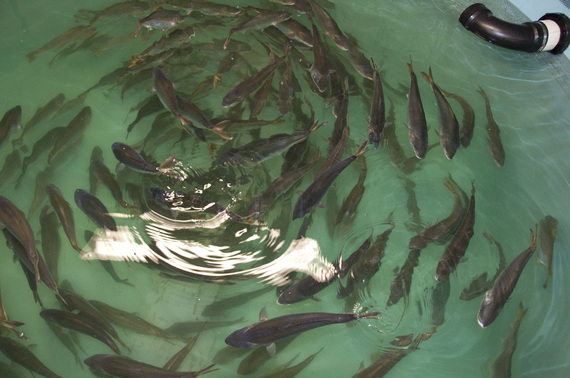 ImpactAlpha.com -- The hook is baited, and private-equity and venture-capital fund managers are reeling in capital to finance next-generation fish-farming enterprises across the country and around the world.

Several dedicated funds are targeting aquaculture investments specifically. At the same time, many broader venture capital and private-equity funds, focused on food and agriculture and even technology, are adding investments in wild-caught seafood suppliers, processors and consumer brands, as well as aquaculture, to diversify their portfolios.

Even some public-equities investors have added oceans-related investment strategies; Rockefeller & Co., for example, is betting that increased regulation around ocean health will increase the value of sustainability-based ocean assets.

The result is a clear uptick in investor interest and available capital for enterprises targeted at the sweet spot of the food market -- healthy, sustainable, tasty fish.

"The whole spectrum of investors are approaching us," says Amy Novogratz, managing director of Aqua-Spark, a Dutch-based fund that closed on financing of €10 million (about $11.25 million) last year. Aqua-Spark has invested in Chicoa, Mozambique fish-farming operation, and Calysta, a California biotech company that uses microbes to produce a fishmeal substitute. The fund expects to close four more investments in the next several months.

Novogratz says fundraising has accelerated for this September's anticipated close on an additional €10-15 million. "People see the numbers. They realize the forecasted growth."

The U.S. imports more than 90 percent of its seafood, a supply that will become more constrained as global demand rises and wild-caught production peaks or declines. By 2030, according to the World Bank, aquaculture will supply two-thirds of global fish consumption, or 93 billion tons, up from 53 billion tons in 2008.

That is driving growing interest in efforts to replicate farmed-fish production facilities close to large consumer markets across the country. New technologies for filtration and new feedstocks are helping prove out the proposition for land-based, recirculating aquaculture systems, or RAS. Proponents say such facilities can overcome some of the problems, such as disease and escape, that have hurt some open-ocean aquaculture operations.

Without the vagaries of wild-catch operations or even open-ocean aquaculture, the emerging land-based aquaculture model lends itself to private-equity style owner-operator model that can be predictably modeled, financed and rolled out at scale.

"This does become a pretty predictable model," says Joe Hankins, director of the Freshwater Institute, a project of the nonprofit Conservation Fund. "It's pretty cost-competitive now. If you add in sustainability, the carbon footprint, transportation costs, consumer interest, this could be attractive to investors."

The Conservation Fund is in the early stages of creating a dedicated fund to invest in land-based aquaculture assets, from the supply chain to production to distribution, Hankins says. Freshwater Institute has been developing aquaculture technology at a facility in Shepardstown, West Virginia, for nearly five years. Since last year, Freshwater's salmon has been available in Maryland and Virgina through Wegmans grocery stores.

"There's money starting to sense that this is an opportunity and the timing is good," he says. "We think we've demonstrated that it can work. Can it work at a much larger scale? That's really an open question."

The Conservation Fund, along with Aqua-Spark, is a sponsor of Fish 2.0, the competition for sustainable seafood businesses, now in its second year. There are a range of aquaculture ventures from around the world, both startups and growth companies, says Monica Jain, founder of the competition.

"They all have some innovation associated with their business model." Jain said. "Some are using advanced aquaculture techniques to reduce energy costs, wastes and loss from disease. Others are developing new fish feeds or software to make fish farming businesses more efficient."

Jain said the growth in the number and quality of businesses competing in Fish 2.0 this year, compared to the contest's first cycle in 2013, is matched by increased interest from investors as well.

"We are seeing interest in the seafood sector from a much broader group of investors, in terms of types of capital as well as geographies," she said. "Many of these investors are considering dedicated investment funds for the sector."

Mitchell Lench, founder of Treetops Capital in Cape Elizabeth, Maine, for example, is planning to launch a sustainable seafood fund later this year. He says he has found interest among high-net-worth individuals, family offices, foundations and impact investors in a fund targeting the broader seafood value chain, including not only land-based aquaculture, but also, for-example, techniques to capture the value from by-catch and other "waste."

Lench has already made one investment, in Acadia Harvest in Brunswick, Maine, which is raising $8 million to build a production facility to grow California Yellowtail (Seriola lalandi) -- bringing a sought-after sushi fish closer to chefs and home cooks in New England and New York. Acadia Harvest in March won a $657,000 grant from the National Science Foundation in support of the company's anticipated commercial launch in 2017 or 2018.

"If you can get the tech down, this has worldwide application," Lench says. "You want to be near your market. If you can move this to Minneapolis, if you can do saltwater fish outside of coastal areas, if you can get to that model -- that's a game-changer."

Larger funds are eyeing the market as well, not always with an explicitly sustainable eye. The anticipated growth in the aquaculture supply chain helped Pontos Aqua Holdings LLC, based in New York, raise $75 million last year for investments in raw materials, equipment and services, animal health and feeds. Pontos seeks to invest between $5 million and $75 million.

Potentially even more significant than the dedicated funds are the growing number of portfolio investments from broader venture capital funds, largely around food and agriculture, that are investing in seafood and aquaculture businesses as a way to diversify their portfolios.

Wheatsheaf Investments Ltd., set up by the Grosvenor Estate, a wealthy UK family, invested $5 million in Enterra Feed Corp. in September 2014, to scale up the company's production of fish and livestock feed based on larvae of the black soldier fly (see "These Insects Feed Fish That Feed People").

"Wheatsheaf seeks out commercial solutions that contribute towards meeting the growing global demand for food, water and energy in the face of a rapidly changing world population," Anthony James, Wheatsheaf's chief investment officer, said at the time.

Enterprises that fit that bill appear to be able to raise significant rounds of growth capital. Wheatsheaf last year also led a $12.6 million round of equity financing for San Francisco-based BluWrap, which has developed technology to regulate the oxygen exposure of perishable proteins -- starting with Chilean salmon -- and thus enable fish to be shipped by sea and arrive fresh in destination markets weeks later. Sea freight provides both lower costs and lower carbon emissions.

BluWrap's earlier investors, who also participated in the latest round, are also playing the growing global demand for food. Anterra Capital, based in Amsterdam, invests in companies commercializing technology around inputs such as feed and nutrients, "precision farming," logistics and consumer safety. The fund was spun out in 2013 from from Rabo Ventures, the food and agriculture venture capital fund of the big Dutch bank, Rabobank.

BluWrap is the only seafood-industry investment of Firelake Capital, an early-stage Silicon Valley investor that is betting on the growing demand for higher-quality products and services from the emerging global middle class.

"These factors will boost demand for many commodities, especially superior goods, and will require a massive expansion of infrastructure," according to the fund. "Increased demand for fish and meats will require more protein feeds, grains, and fertilizers."

Paine & Partners, which last year closed on $893 million in financing for its fourth fund, has two fish-related investments in its Fund III portfolio. Paine does not specifically supply a sustainability lens, but sees such practices as simply good business. ScanBio, in Norway, for example, produces fish meal and fish oil from the unused by-products of fish processing, such as salmon trimmings and aquaculture waste. The company says no fish are caught specifically to supply its factories.