SAN FRANCISCO -- Rose Gutierrez has a big decision to make.

Gutierrez, who was diagnosed with breast cancer last spring, had surgery and 10 weeks of chemotherapy. But the cancer is still there. Now Dr. Jasmine Wong, a surgeon at UC San Francisco, is explaining the choices – Gutierrez can either have another lumpectomy followed by radiation, or she can get a total mastectomy.

“I think both options are reasonable,” Wong said. “It’s just a matter of how you feel personally about preserving your breast, how you feel about having radiation therapy.”

“I’m kind of scared about that,” said Gutierrez, 52, sitting on an exam table with her daughter on a chair beside her.
“Well if you made it through chemo, radiation is going to be a lot easier,” Wong told Gutierrez, who is from Merced, Calif.

In many hospitals and clinics around the country, oncologists and surgeons simply tell cancer patients what treatments they should have, or at least give them strong recommendations. But here, under a formal process called “shared decision making,” doctors and patients are working together to make choices about care.

It might seem like common sense: Each patient has different priorities and preferences; what’s right for one patient may be wrong for another. Of course patients should weigh in. But many aren’t accustomed to speaking up. Even the most engaged or educated patients may defer to their doctors because they are scared, they don’t want to be seen as difficult or they think the doctor knows best.

For their part, not all doctors want to cede control to patients who have far less medical knowledge or who may be relying on information they got from friends and the Internet. Also, many physicians don’t have the time for long discussions and the health care system isn’t set up to pay for them. 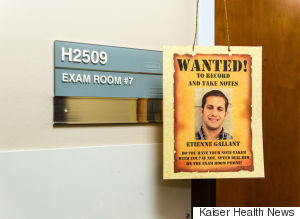 Even so, hospitals and clinics in several other states, including Massachusetts, Minnesota and Washington, have created collaborative programs to ensure that information and concerns flow back and forth between patient and doctor. UCSF’s approach, in particular, has been a model for other programs around the nation.

Putting Patients in the Driver’s Seat
The concept of shared decision making has been around for years, but it is gaining new traction with the nation’s health law, which specifically encourages its use.

“Patients and families need to be in the driver’s seat with their doctors, making decisions that are the right choice for them for their unique circumstances,” said UCSF associate professor Jeff Belkora, who runs the shared decision-making program also known as the Patient Support Corps.

That way, he said, patients avoid “a rocky, bumpy ride” of either too much or too little treatment.

At UC San Francisco, patients receive DVDs, pamphlets or links approved by the physicians that explain available options for treatment. During appointments, the doctors not only explain carefully the benefits and the risks of those options but also ask about patients’ priorities and goals.

Patients are paired with college students or recent graduates who help them make a list of questions for the doctor beforehand. These young people also record the visit and type notes for the patients, who then leave with a definitive account of what was said.

That’s important because patients are nervous and emotional after a cancer diagnosis and often freeze up, said premed student Edward Wang. Wang said his presence helps put them at ease. “You’re just making a question list and you’re just taking notes,” he said. “But these simple things really do matter to the patient and to the doctor as well.”

Shared decision making has been used for patients with breast and prostate cancer, heart disease, back pain and other conditions for which there are multiple treatment options that offer similar results. 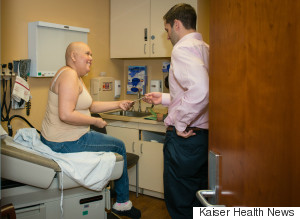 “It’s a massive cultural change,” said Glyn Elwyn, who researches shared decision making at The Dartmouth Institute for Health Policy and Clinical Practice. “It’s going from ‘I’m the expert, take my recommendation’ to ‘I am going to inform you and respect your wishes.’”

Elwyn and other researchers have found that patients are more satisfied with their care when they have a say in it. Also, it may save money. Some research shows that patients who are involved in their treatment decisions are more likely to be conservative, opting against costly procedures or surgeries.

‘It’s All a Black Cloud’
That doesn’t mean the decisions are easy – even for knowledgeable patients.

Ilene Katz, a UCSF nurse who often works with cancer patients, was recently diagnosed with breast cancer and became a patient herself.

At first, she wanted a mastectomy. “My knee jerk reaction, which probably a lot of women have … is there is cancer in my body, cut it out, cut all of it out,” she said.

But on this February day, she came out of the exam room feeling different. A long conversation with the surgeon and the oncologist helped her decide that, for her, there was no real benefit to having a mastectomy over a lumpectomy.

Katz said she was relieved someone was there taking notes so she could go over it later. “I don't remember everything,” Katz said, her eyes red from crying. “It’s all a black cloud.”

Katz’s doctor, Laura Esserman, said some patients want her to make choices for them. But Esserman, head of the UCSF breast care center, sees herself more as a coach, often asking questions to make sure patients don’t act out of fear or lack of knowledge: What’s the most important thing to you? How do you feel about your body image? What complications are you worried about?

Typically, Esserman said, she tells patients, “I need to know more about your thought process … and how you are going to feel a year from now.”

Candace Walls, 41, appreciates having some control over her care. Diagnosed with cancer six years ago in Stockton, Walls said the doctor recommended a mastectomy and then did the surgery.

“I didn’t have lots to choose from,” Walls said. “It was just kind of like, ‘This is what I think you should do.'” 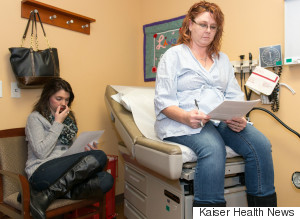 Since coming to UCSF a year ago, however, she has been very involved with her decisions about breast reconstruction, even asking the doctor to redo part of the surgery when she didn’t like how it turned out. At a February appointment, Dr. Wong answered her questions one by one. “It is a very good feeling to know you can say what you want to your doctor,” Walls said afterward.

Working as a Team
That same day, Gutierrez, the patient from Merced, sat nervously in Wong’s exam room as the doctor explained more about her surgery choices.

“With the partial mastectomy we just need to take a little bit more tissue out … and then we would have to do radiation,” Wong said, as a note taker sat typing quickly. “With the [total] mastectomy, you probably wouldn’t need radiation but obviously it’s a bigger operation.”

Gutierrez said that as a single woman in her 50s, she wasn’t too concerned about keeping her breast. But she was worried about how her body would react to radiation. Most important, she wanted to be sure doctors got rid of the cancer.

Still, Gutierrez told the doctors she was leaning toward the lumpectomy, saying she felt nervous about the pain. “I’m a big sissy,” she said.

“No, you are doing great,” Wong said. She encouraged Gutierrez to take the time she needed to talk over the choices with her family and to call if she needed to talk more. “I don’t want you to feel like you are pressured to make a decision.”

A few days later, Gutierrez decided on a mastectomy, mostly to avoid the radiation and the worry about cancer’s return. She had surgery in early March.

Reached by telephone the next day, Gutierrez said she felt good about her decision – and how she made it with her doctors. “It makes us seem like we are a team,” she said.