Twice in recent months, I've heard speakers refer to a decisive moment in American history, a moment which shows our capacity to mobilize quickly in the face of an existential threat. One of them was Lester Brown, who wrote in his book Plan B 2.0: Rescuing a Planet Under Stress and a Civilization in Trouble:

"In his State of the Union address on January 6, 1942, one month after the bombing of Pearl Harbor, President Roosevelt announced the country's arms production goals. The United States, he said, was planning to produce 45,000 tanks, 60,000 planes, 20,000 anti-aircraft guns, and 6 million tons of merchant shipping. He added, "Let no man say it cannot be done."

"No one had ever seen such huge arms production numbers. But Roosevelt and his colleagues realized that the largest concentration of industrial power in the world at that time was in the U.S. automobile industry. Even during the Depression, the United States was producing 3 million or more cars a year. After his State of the Union address, Roosevelt met with automobile industry leaders and told them that the country would rely heavily on them to reach these arms production goals. Initially they wanted to continue making cars and simply add on the production of armaments. What they did not yet know was that the sale of private automobiles would soon be banned. From the beginning of April 1942 through the end of 1944, nearly three years, there were essentially no cars produced in the United States."

With the exception of nuclear war, I can't think of any greater existential threat to human civilization than climate change and its related impacts. If ever we needed an "FDR moment," now would be it.

Looking back through a week's worth of posts on the Daily Kos climate change SOS blogathon, no topic was left behind: there are pieces on how climate change is taking its toll on virtually every ecosystem on the planet; how political will is undermined by those who are invested in the status quo; and how the solutions are there for the taking.

The solutions proposed -- and being implemented -- are inspiring to be sure: campaigns against coal, fracking, Arctic oil drilling, and fossil fuel subsidies, to name a few, are aimed at busting the fossil fuel monopoly on our energy future. Likewise, campaigns on deforestation, sustainable agriculture and ocean protection are moving us in the right direction.

Equally inspiring: Investments in clean energy are soaring as the costs of renewables drop rapidly around the world. According to Michael Liebreich, CEO of Bloomberg New Energy Finance, more than $1 trillion has been invested in clean energy over the last seven years.

But are we doing enough?

According to the International Energy Agency, "without further action, by 2017 all CO2 emissions permitted in the 450 Scenario will be "locked-in" by existing power plants, factories, buildings, etc." Bear in mind that the "450 scenario" -- whereby the CO2 concentration in the atmosphere stabilizes at 450 ppm -- only gives us a 50-50 chance of keeping temperature rise below 2°C. Also note that a 2°C target in itself is not exactly safe -- it's now being described as the threshold between 'dangerous' and 'extremely dangerous' climate change.

Maybe this is the sort of thing Woody Allen had in mind when he quipped, "More than any time in history mankind faces a crossroads. One path leads to despair and utter hopelessness, the other to total extinction. Let us pray that we have the wisdom to choose correctly."

Stabilizing the climate requires global CO2 emissions to stop increasing, and then to steeply decline. Fast. The longer it takes for emissions to peak, the steeper the decline will have to be in the years that follow. The graph below, although several years old now, shows how much smoother the transition would have been had we taken aggressive action back in 1990, and how much harder it gets every single year we delay. 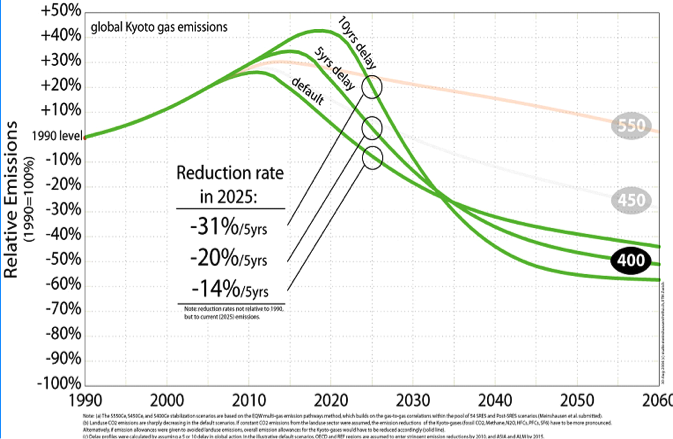 And delaying we are. Following a brief drop in emissions in 2009 as a result of the global economic recession, they began growing again in 2010 and emissions in 2011 reached a new record high -- a 3.2 percent increase over 2010.

There are different views about how much we need to reduce emissions, by when and by whom. In its last assessment report, the IPCC said that for the 450 scenario, developed countries needed to reduce their emissions collectively between 25 and 40 percent below 1990 levels by 2020, and that developing countries needed to substantially reduce their emissions below the amount they were projected to grow. Lester Brown, on the other hand, speaking at the AREDAY conference last week, made the case that food scarcity will ultimately be our civilization's weakest link and argued that we should be aiming to cut carbon emissions 80 percent by 2020.

In Copenhagen in 2009 many countries put down their pledges in writing for the first time. But even if all countries fully implement their commitments -- a rather optimistic assumption -- we're looking at a temperature rise of 2.5 to 5°C before the end of the century. This is a terrifying prospect as the scientists at Climate Action Tracker show in this graphic: 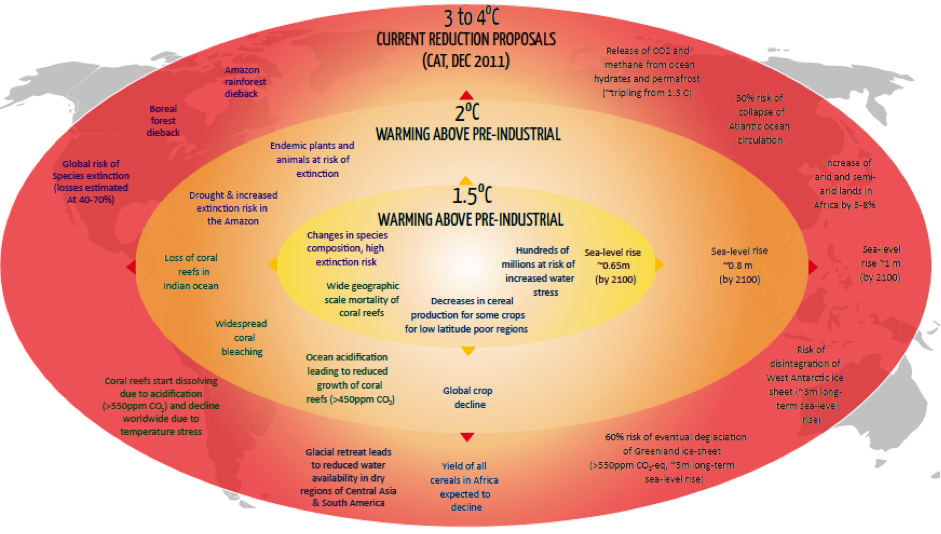 So we have five years or less to transform our global energy systems, not to mention the changes we need to make in forestry and agriculture practices. No wonder Very Serious People like Bob Watson have begun openly questioning whether 2° is "out the window."

Which brings me back to the "FDR moment." Business as usual, even a positive variant in which we accelerate action, won't keep us below 2° let alone the 1.5° limit that more than 100 countries are calling for. We need to start moving at warp speed. Sadly, neither of the U.S. presidential candidates is even talking about climate change, let alone proposing the kind of action that will protect our children from dangerous climate change. I don't know which is more depressing -- candidates who don't consider this a top priority, or an electorate which doesn't demand it of them.

We have confronted the threats of drugs and terrorism by declaring war on them. With my sincerest apologies to those who abhor the language and metaphors of war, I believe it's time we declare one on climate change, and empower our leaders to get the job done. We can all play a part, through lifestyle choices, participation in activist campaigns, spreading the word through our communities, and ultimately letting our elected representatives know that we will vote like we mean it. It's time to insist that our leaders lead.

This post originally appeared on Daily Kos. It is part of the Climate SOS blogathon.