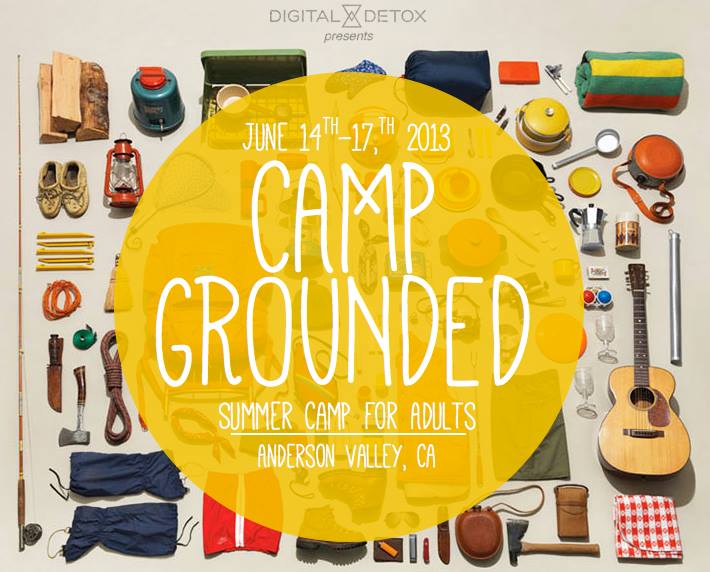 Color wars. Village communities demarked by wildlife flags. A reveille bugle to wake us every morning. The 325 of us, ranging in ages from 19 to 67, were warned. We were prepped. But it was only when we stepped deep into the cover of 80 acres of cool redwoods in Anderson Valley (three hours north of San Francisco), into a 1970's boy scout camp straight out of Wes Anderson's wildest dream that we realized, finally, where we were.

And not just any camp. A camp for adults. Without electronic devices, computers, phones, lights, heat, or watches. We were not to speak about the "W" word (that would be work), what we did for a job (hereto forth to be called "fun" or "play"), and that revealing our names or ages would result in severe punishment (pulling out one another's hair, strand by strand for each offense). We were asked to hand over our bags of iPads, Kindles, iPhones, Blackberries, digital cameras and a jumble of cords. Mine alone weighed 15 pounds and was giving me a lopsided walk; just one of the many reasons I had signed up for this experience. The offending devices went into a paper sack and were unceremoniously locked away as the campers (again, mostly me) whimpered softly.

As our tech lifelines were stripped, we couldn't help but wonder what a Digital Detox meant. After the initial withdrawal, we were promised special connections with each other, a slow release from our wired selves; a disconnect to reconnect. And a whole lot of good feelings, spirituality, and ultimately, a freedom we once knew as kids but had forgotten now that we were drones in the world. We were also promised that after just a few hours of sing-a-longs, we'd rid ourselves of the nasty urge to grab our phones to document the experience or share with someone who was not there. Because at this camp, the only people who mattered were the ones you were speaking to face to face. Something that I personally had forgotten how to do at least three years ago.

Greeted by enthused counselors with names like Bricky St. James, Prow Prow, Golden Bird, Honey Bear, Topless (a jovial tea-master who claimed not to have worn a shirt in six years) and our saintly, mustachioed director Fidget McWigglesworth, we soon dragged our packs to our open-air bunks, geared up in shorts, face paint, and with mouthfuls of chocolate chip cookies, decided upon our own nicknames.

Mine was Lil' Ripper. My best friend; Magenta.

We sipped woody tea and strolled the landscape before the others arrived from San Francisco, Oakland, Berkeley, Australia and Canada. We went to the Wonder Woods, to the Magic Bus where many a late night party would be spent swinging in hammocks and playing music, to the yurt-cum-tea room alight with romantically strung Christmas bulbs and carpeted with Oriental rugs and Indian tapestries. We ran to the flagpole, the main field. We stumbled upon vistas and the hollowed out trees seemingly tailor-made for Tarot card readings. Creative stations. Rock walls. Typewriters to post messages of hope and inspiration to one another strung along a wall titled "Human Powered Search Engine." Questions were asked, questions were answered. Legos were assembled and Frisbees were thrown.

Playshops during the day included hip-hop dance class, archery, meditation, non-violent communication (my favorite), partnered yoga, river walks, and more were on sign-up sheets where we handwrote our preferences. We raised the flag and hugged one another, sang songs, served one another vegan meals and water, and took one-inch photos of each other by holding up our hands and making tiny boxes as viewfinders, forever imprinting what we saw into our memory banks.

"Internal-Gram!" Proclaimed a counselor, before we rushed off to campfire talent shows, jam sessions in dark pockets. Inspirational signs and spirit sticks abounded:

YIELD TO THE PRESENT

TODAY YOU ARE YOU. THAT IS TRUER THAN TRUE. THERE IS NO ONE ALIVE WHO IS YOUER THAN YOU.

The Kumbaya was infectious. In Sun Fire's outdoor meditation, I tearfully told him an internal struggle I've never told anyone. He kept my gaze, squeezed by hands and thanked me for sharing and reinforced how proud of me, and of the moment, he was. Later when I spent three hours making a fire with Condor, who literally lit it out of nothing more than two sticks, a piece of rope, whispers and intentions. Then he ran back to his backpack to gather his stone peace pipe. We stayed so long it began to get dark, and he told us of how to speak to the fire, release our problems to the non-judgmental flame, and then burn our pain away.

At the end, I held his shoulder and thanked him for the amazing experience, and true to counselor form, he deflected gracefully. "Thank you. Because the amazing thing here, is you."

There was sleeping under the spiders and the stars, grass stains and field rashes from Capture the Flag. Wild costumes. Skinny swimmin' and streaking through the 80's themed prom. Outrageous contests that resulted in me diving my face into a pie plate of flour to find a piece of bubble gum to chew, blow a bubble and then pass on. I coughed up enough flour to make a batch of scones, but we did place second. There were haircutting contests where scissor-wielding amateurs treated volunteers to choppy services. And then? The scraps of hair on the ground were swept up by the final competition: the best beard contest, where girls and boys alike literally had the floor-hair glued to their faces.

We pranked each other, we danced like maniacs, and we never knew what time it was or where we had to go. We moved as a group in tune, as a flock of birds or wave. We whispered into the wind and had a silent candlelit dinner under the trees. Many people choked up. When we were finally allowed to speak again (and eat), we devoured our gluten-free mac and cheese and mustard greens like a Thanksgiving dinner. Then many of us ran to the port-a-potties, as few were accustomed to our body digesting so quickly.

It was exhausting, it was a social experiment; it was a beautiful experience that brought me back to life. Consciousness. Living in the moment. Being free from cubes and screens and judgment. It has ushered in a new revolution between all of us. No Facebook for a month, we swore. No texting for six, we exclaimed. No answering emails and instead inviting meetings to be in person. Easy to enact in Anderson Valley, perhaps not as much in midtown Manhattan, where I "play" for "fun." We wrote each other's real names down in our booklets and promised not to look until we'd left. We put our numbers in and promised to call. Just like when I was twelve, I left sunburnt, sweaty, with an infected tick bite, and full of simple purpose.

There's too much philosophically to speak of in terms of the backlash to this wondrous world of technology that has saved us in so many ways and may very well be destroying us in others. But even with this incredible camp experience and detox, we struggled intellectually how to bring this back to our lives in the "other world" in a meaningful way. We talked about many things, as there was nothing to do but talk and to act: about life, God, love, the universe.

Eventually, the topic switched from what dreamed to finally, where we were from so we could spread the word at home about this mini-revolution. When I said, "Brooklyn," the painted fairies around me seemed shocked.

"How did you hear of it?" They wanted to know, entranced that I was not a Californian like them.

I spoke in wonderment back. "How did you hear about it?"

"A forwarded Eventbrite from a friend in the Castro," said another.

"We heard it on Twitter," I motioned to Magenta, since she was my source, who'd gotten it from a tweet. "You know they have the Internet in Brooklyn, too, right?"

Get more information on other Digital Detoxes near you, right here.