College students are pretty sure their peers all downloading the new operating system for iPhones caused their campus WiFi to crash.

The Post, an Ohio University student newspaper, reported that the school asked students not to update their iPhones in a campuswide email.

"On the odd chance that this is related to the iOS 7 update release, please consider waiting to download your copy until the current issues are resolved," wrote Sean O'Malley, OU’s Information Technology communications manager.

Allen R. Taylor, the chief technology officer at Marshall University in W.V., told the Parthenon student newspaper that their Internet usage went through the roof after the iOS 7 release.

"The suspicion is that it is principally these downloads of iOS 7," Taylor said. "These kinds of things happen all the time when large releases occur, such as Windows or Mac OS."

Students were frustrated at Abilene Christian University in Texas, which school director of networking service Arthur Brant blamed on the iOS update.

Attn ACU students: stop downloading ios7 to all 9 of your devices for a sec so I can use the Internet. Pls? I need to watch breaking bad.

Business Insider noticed a few students tweeting about it at schools like New York University and Western Connecticut State University:

Oh, thousands and thousands of students want to update to iOS 7 all at once & kill our network? FINE. NONE of you get to update. #SysAdmin

Apple had problems too, as Apple Insider noted, the company sent out a "high priority alert" to employees warning about server issues preventing iPhone customers from updating to the new operating system.

PHOTO GALLERY
15 Of The Most Epic College Pranks 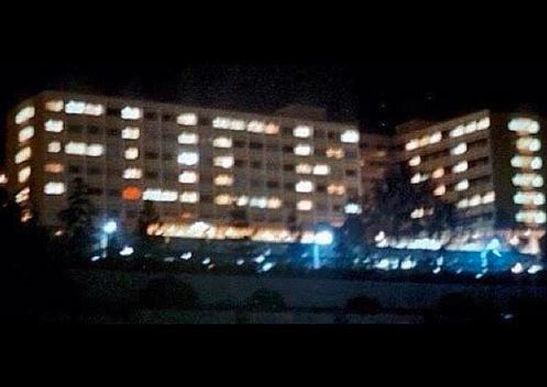 1 / 15
UCLA Dropping F-Bombs On USC
The University of Southern California and the University of California-Los Angeles are only about 12 miles apart, so getting to each other's campus for a quick prank isn't a huge hurdle. In 2012, just <a href="http://www.tmz.com/2012/11/14/ucla-usc-rivalry-dorm-light-football/">days before the Rose Bowl, UCLA students rigged</a> the lights in a dorm to spell out "F*CK USC." But it turned out this may not have actually been real at all, so the big prank <a href="http://laist.com/2012/11/14/sorry_that_ucla_prank_looks_fake.php">may be on the gullible internet sharing the same</a> photo over and over, the LAist noted: First of all, we're guessing that if UCLA managed to pull off this prank in 2012, we'd be seeing multiple variations of the picture on Twitter/Tumblr/Facebook/whatever, but all we're seeing is the same shot from the same angle. Second, some at UCLA in this Reddit thread note that Sproul Hall is under construction, so this picture doesn't look current. Finally, we found out that this photo looks exactly like a prank from 1977. Students camp out to protect their precious statues -- both of which have been targeted in the past. USC's Tommy Trojan was previously hit with both blue paint and manure, while the Bruin Bear has been covered in cardinal and gold paint.
Via TMZ