What were the establishment priorities that moved inexorably forward in both Republican and Democratic administrations? The first was a robust and aggressive foreign policy. As Stephen Kinzer wrote about those in power during the 1950s, "Exceptionalism -- the view that the United States has a right to impose its will because it knows more, sees farther, and lives on a higher moral plane than other nations -- was to them not a platitude, but the organizing principle of daily life and global politics."

The second principle of the establishment was that "what is good for Wall Street is good for America." Despite Democrats' efforts to paint the GOP as the party of Wall Street, one would only have to look at the track record of Clinton's treasury secretaries Rubin and Summers (specifically, their zealous efforts to kill the Glass-Steagal Act and deregulate the big banks and the commodities markets) to see that both major parties are guilty of sucking up to money; apparently, the establishment rules no matter who is in power.

It has been my contention for the last few years that we are living in an Interregnum. The Italian philosopher, Gramsci defined the concept well: "The old is dying and the new cannot be born;in this interregnum many morbid symptoms arise." This sense of being trapped between a dying establishment and a new order that is not quite formed, plays itself out in four areas.


In our domestic politics we see a populist dead end battle as an older, whiter America invests its hopes in Donald Trump and Ted Cruz to stave off the multicultural state filled with immigrants and young people in which they are no longer the majority of citizens. In the world of business we see the giants of the carbon economy (Exxon Mobil, Koch Industries, Peabody Coal) fighting to preserve their businesses in a world that must transition to a clean energy economy.

Similarly, the giants of Wall Street and Silicon Valley are fighting against real regulation of their businesses and serious taxation of their billions in capital gains. And finally in the world of international affairs we see the forces of the military industrial congressional complex battling to keep an $800 billion military budget in order to preserve America's status as the sole hegemon, even as they realize that the future is a multipolar world.

Despite the seeming chaos of our current political campaign, where "the worst a full of passionate intensity," we have to see this as a transition, not a permanent condition. The deep irony is that only a true dead-ender would be willing to gamble that 30 years from today we will live in a country where non-hispanic Whites make up the majority (the Brookings institution says they become a minority in 2044), where coal and oil are still the dominant power sources and that America is the dominant hegemon and Wall Street rules the economy.

In other words, we know the change is going to come. It's just a matter of how bitter the resistance is going to be. That is why both the Trump and Cruz campaigns are so fascinating and why a historical perspective is important. In the early 1850s, many in the Whig Party (the predecessor to the Republican Party) began to adopt a very nationalistic stance. They believed that the waves of catholic immigrants flowing into America from Ireland, Germany and Italy were a huge threat and that they all were under control of a foreign sovereign:The Pope. They eventually split off from the Whigs and formed the Native American Party (known also as the Know Nothings). Abraham Lincoln was clear in the threat he saw posed by the Know Notthings.

When the Know-Nothings get control, (the Declaration of Independence) will read 'all men are created equal, except negroes and foreigners and Catholics.' When it comes to that I should prefer emigrating to some country where they make no pretense of loving liberty -- to Russia, for instance, where despotism can be taken pure, and without the base alloy of hypocrisy.

But ultimately the Know Nothings failed, because America rejected nativism. But today, in a post Citizen's United world, there are huge amounts of money being spent by the American Plutocracy (see Jane Mayer's book on the Koch Brothers, Dark Money), to preserve the dying world. They cynically use nativism to appeal to the working class because they might not be as sympathetic to their real interests in maintaining the economic status quo in the finance, oil and military busineses.

But there is a Democratic Party establishment as well, that is equally protective of the needs of Wall Street and the Military industrial Complex. And that is why the virtual tie in the Democratic caucus seems so important. It seems to me that Bernie Sanders' message is rather simple. We must reallocatate how we spend the people's money. Look at this chart of our discretionary budget. 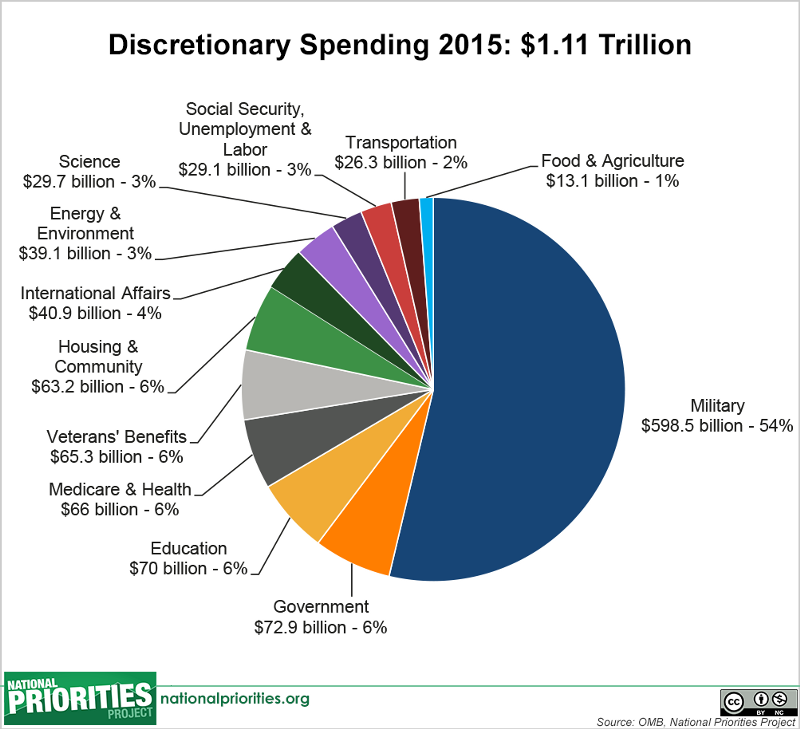 Even this chart does not account for an additional $150 billion in war spending in the middle east. I think what Sanders is trying to do is to get us to imagine a country that no longer has to spend close to a $1 trillion a year on defense and instead reallocates some of that money on Medicare for all and free college tuition for the needy.

But this kind of bold vision is rejected by the Democratic establishment as being unrealistic. The are saying that Sanders' revolution is impossible and that incrementalism is the only hope for progressives. Recently, the nature of this revolution was examined by Paul Krugman.

If the ugliness in American politics is all, or almost all, about the influence of big money, then working-class voters who support the right are victims of false consciousness. And it might -- might - - be possible for a candidate preaching economic populism to break through this false consciousness, thereby achieving a revolutionary restructuring of the political landscape, by making a sufficiently strong case that he's on their side.

On the other hand, if the divisions in American politics aren't just about money, if they reflect deep-seated prejudices that progressives simply can't appease, such visions of radical change are naïve. And I believe that they are.

But I think Krugman is wrong. The forces of intolerance are not as strong as he believes. Think of the vocal opposition to the very idea of gay marriage five years ago. It is a tribute to our ability to adapt, that the battle between the opponents of gay marriage and a younger generation is no longer even part of the current bitter political campaign. The old way died and the new attitude was born. We got through the interregnum quickly.

Krugman's use of the term "false consciousness"seems appropriate to me. In the 2012 Presidential election 93 million eligible Americans did not vote, according to the Center for the Study of the American Electorate. Only the theory that ordinary citizens are unable to really understand how they are being manipulated by the plutocrats could account for this extraordinary passivity on the part of the American public.

"The possibility of radically rethinking why we spend almost 60 percent of our discretionary budget on the military will not happen on [Hillary Clinton's] watch."

In what was known as the Progressive Era, when Teddy Roosevelt and Woodrow Wilson were fighting the entrenched wealth of John D.Rockefeller and J.P. Morgan, the liberal essayist Walter Lippman bemoaned a public that "is slow to be aroused and quickly diverted ... and is interested only when events have been melodramatized as a conflict."

What Sanders is trying to do is get beyond the cynicism of the Lippman's and the Krugman's and see the middle class for what it is. R.R. Reno understands this.

What's striking -- and crucial for understanding our populist moment -- is the fact that the leadership cadres of both parties aren't just unresponsive to this anxiety. They add to it.

The intelligentsia on the left rarely lets a moment pass without reminding us of the demographic eclipse of white middle-class voters. Sometimes, those voters are described as racists, or derided as dull suburbanites who lack the élan of the new urban "creative class." The message: White middle-class Americans aren't just irrelevant to America's future, they're in the way.

Conservatives are no less harsh. Pundits ominously predict that the "innovators" are about to be overwhelmed by a locust blight of "takers." The message: If it weren't for successful people like us, middle-class people like you would be doomed. And if you're not an entrepreneurial "producer," you're in the way.

Is it any surprise that white middle-class voters are in rebellion?

So where does this leave us in the election of 2016?

My guess is that Trump will flame out in the next six weeks. For the Republican establishment, it is clear that folks like the Koch Brothers would be very happy with Ted Cruz or Marco Rubio. Both are pledged to lower their taxes and fight any efforts to make climate change a priority. Both are fighting to be the super hawk.

On the Democratic side, the interregnum calculation is more nuanced. Both Clinton and Sanders believe in the demogaphic shifts that will make America a true multi-culture. Both embrace the science of climate change and believe it is a key priority. But it is in the other two elements that I worry about Clinton. She is no less a hawk than Rubio or Cruz.

The possibility of radically rethinking why we spend almost 60 percent of our discretionary budget on the military will not happen on her watch. And then there is the matter of Wall Street. There is nothing in the 25 year history of the Clinton's that would lead me to believe they would really take on Goldman Sachs and Citigroup. Bill and Hillary can talk like populists, but they consistently come down on the side of the plutocrats.

So that leaves true reform progressives with Bernie Sanders. He is an imperfect leader, but sometimes you have to play the cards you are dealt. It's clear the Clintons spent last year making sure that Elizabeth Warren or Deval Patrick did not run. They clearly didn't think that an obscure 74-year-old democratic socialist from Vermont would be a real challenge. But he is.

It may be that 2016 is the last gasp of the establishment on both sides of the aisle and we will see a Clinton vs. Rubio election in November. But it also could be that Sanders is right and, "It is just too late for establishment politics and establishment economics." Then if he could get Elizabeth Warren as his running mate, perhaps we could get out of this Interregnum sooner rather than later.