The limitation of a polling snapshot is that, as a snapshot, it is subject both to late shifts in support and errors in predicting precisely, in this case, which of Iowa's 2.3 million eligible voters will turn out for an event that typically draws just over a hundred thousand. 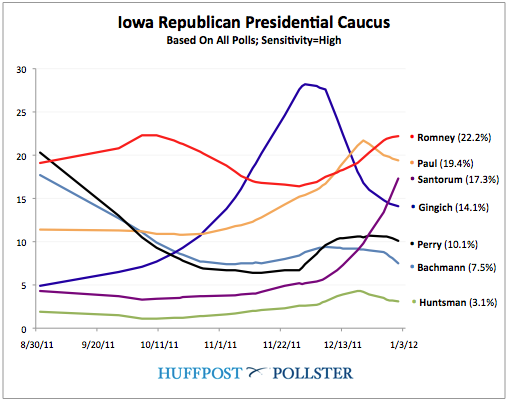 Or consider the 11 individual recent polls fielded within a week of the caucuses: Eight of 11 show Romney leading by at least a single percentage point. Ten of 11 show Santorum running third or lower. While the differences may not be large enough to attain statistical significance in any one poll, the consistency across polls indicates that Romney's lead is real. 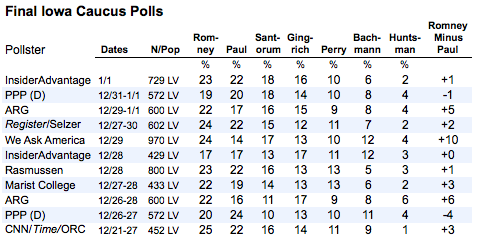 To confirm that Romney is really ahead, we could run a sophisticated statistical model -- or just calculate the odds of flipping a coin and having it come up heads 8 times out of 11. If Romney and Paul were really tied, the odds that at least 8 of 11 polls would show Romney in the lead is just 11 percent.

Of course that math assumes two things that may not turn out to be true: First, that the polls are collectively free of statistical bias, and that any shortcomings in the way they identify the likely electorate are not skewing the snapshot in some meaningful way. Second, it assumes that any surges in support for a particular candidate are over and have not changed the standings over the final days of the campaign. The history of polls conducted before Iowa's caucuses says both assumptions are questionable.

However, if political polling is always some combination of science and art, the process of interpreting the current snapshot and trying to guess at its potential flaws and any future trends is mostly art. That process can be informed by empirical evidence, but it still relies on a heavy dose of subjective judgment.

With that qualification in mind, consider the evidence for whether the current polling snapshot might change or be in error:

First, the case for a Ron Paul win, given the current snapshot and trends, is not strong. Paul's support has been in decline for the last two weeks, and his negatives have been rising. On the Des Moines Register Iowa Poll, for example, the percentage who say they like Paul least among the candidates increased from 13 in late November to 21 percent last week. Again, it's a matter of judgment, but the evidence that polls are sampling too many, rather than too few, of Paul's typically younger supporters is strong.

Second, what evidence suggests that Santorum's surge could translate into a stunning upset win?

Yes, the recent surge of support for Rick Santorum is real and could conceivably produce a surprise result Tuesday night. It is also possible that Ron Paul could pull off an upset, particularly if polls have been under-sampling his supporters. But for now, the best evidence available says that Romney is ahead in Iowa and is likely to stay ahead once all the votes are counted.