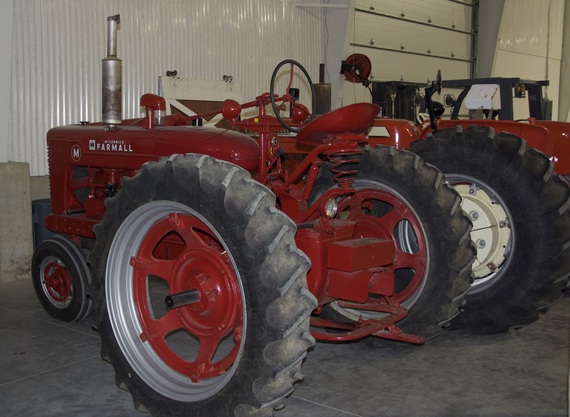 An old McCormick tractor sits in the Handsaker's barn during the cold temperatures in Iowa.

RADCLIFFE, Iowa- Jacob Handsaker is a 33-year-old, fourth generation farmer who is young enough not to remember the farm crisis of the 1980's, but old enough to wonder why this year's crop of presidential candidates aren't addressing the problems facing young farmers.

"I have no doubt that farming is one of the backbones of America," Handsaker said. "Unfortunately it's a game of money and to get the money you're not going to go after the young farmers."

"If somebody were going to start farming now, he would have to inherit it, or marry into it," said Jim.

Jacob Handsaker is raising three young children in the same house his great-grandfather raised his grandfather, who raised his father. Handsaker works along side his father, Jim, and his brother. The family raises corn, soybeans and just recently started planting sweet peas into their family-owned fields.

But the Handsakers are facing the same hardships farmers all across the nation are dealing with- the continuing growing cost of farming. The costs associated with daily farm operation in addition to land costs and machinery is adversely affecting young farmers trying to get into the business.

These problems contrast starkly against the economic problems of the 1980's. Starting in 1980, farmers in the Hawkeye state were hit with a 33 percent drop in land value. That resulted in thousands of farmers declaring bankruptcy.

"I was born in '82 so I didn't live or don't remember the farm crisis, but from what I've heard, people are in a lot better position now," said Jacob, the son. "People are a lot smarter and they've learned. And that's great, we need to learn from history as we move forward."

Government regulation, healthcare tax, and the inheritance tax are among the top problems affecting U.S. farmers, the Handsakers said. And it seems as if the politician's are turning their attention to everyone except the farmers.

They argue that only farmers, not politicians, in America know what's best for the agriculture. The younger Handsaker insisted American farmers, no matter where they are, are the best in the world at what they are doing. 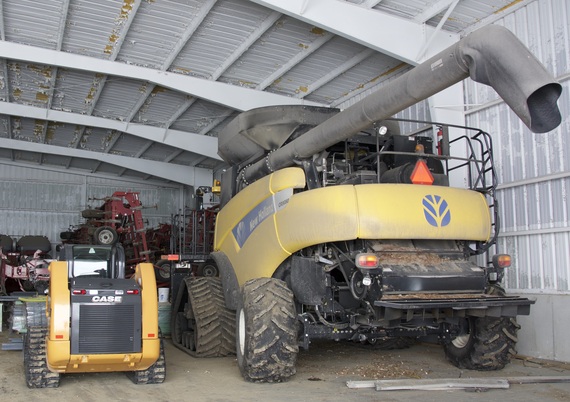 A New Holland combine sits in the barn during the winter seasons, until it is time to be used for harvesting.

Father and son point to the U.S. Environmental Protection Agency and its regulations, such as the Clean Water Act, as farmers' biggest problem. Jim, the father, suggested the government should take a step back from regulating the farm industries and listen to what the local farmers have to say. He acknowledged EPA administrators have held many meetings in Iowa but the elder Handsaker said those conversations were a waste of money.

"They never take any of those suggestions," said Jim. "They never try to understand where the farmer is coming from."

Living your life dependent on crops and agriculture can be challenging for some, especially with the high price of land and machinery. Although the price of land in Iowa has fallen in the past year, a study from Iowa State University showed that the farmland values in Iowa are still double the price than what they were 10 years ago. Right now an acre of high-grade land in Iowa is valued at $7,773. In 2005, an acre of high-grade land was as low as $3,511.

The elder Handsaker remembers that when he began farming he could educate his children through college off the profit from 160 acres of land.

Now the problem is, it takes a profit from 160 acres just to pay the premium for health insurance, he said.

According to United States Department of Agriculture, the average yearly salary for a farmer is around $86,000.

Jacob, the son, wants the presidential candidates to realize that the farm community could have an impact on Election Day.

"They might not be the guys that deliver the most money to the candidates, they're not necessarily the group with a lot of money to throw around, but they're definitely a group with a voice," said Jacob.

She is junior at the University of Oklahoma majoring in broadcast journalism and minoring in human relations.