WATERLOO, Iowa (AP) — It's hard to imagine a handful of women with a pile of old pillowcases could be up to anything important.

But a group of ladies, members of local Lutheran churches, aims to make a difference in the lives of girls half way around the world.

Last week, in a small room at Our Savior's Lutheran Church in Waterloo, armed with sewing machines, scissors, scrap material, trim and about 80 pillowcases, the women from Our Savior's, Redeemer and Zion Lutheran churches were busy transforming old linens into dresses that will be shipped to Our Savior's' Lutheran Synod's partner church in Namibia, Africa.

The event was part of a two-day effort to create the dresses. Another sewing session will be held Saturday at the church, The Waterloo-Cedar Falls Courier reports.

"Our goal is to make 300 dresses," said Jeanette Alton, one of the coordinators of the church's Board of Evangelism. "We have a lady bringing 200 pillowcases on Saturday."

Alton said she expects about 15 volunteer sewers to participate in Saturday's event, including some from St. Paul's Lutheran Church in Cedar Falls. Members of Fredsville Lutheran Church also made 15 dresses they will donate to the effort, Alton said. 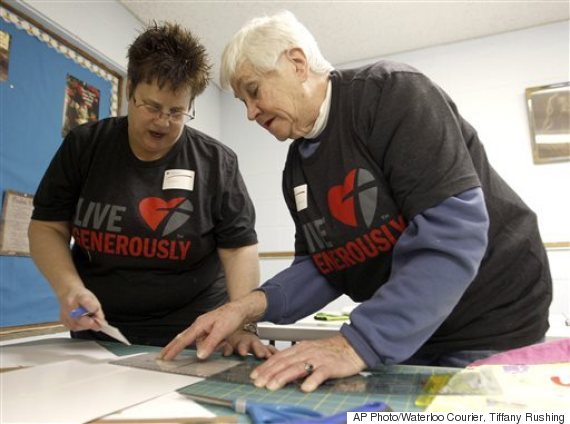 This is the first year members of Our Savior's have tackled the dress-making project, although they have plenty of other service projects under their belts.

For Christmas, the women made and filled 127 stockings for injured military personnel at Walter Reed Army National Military Medical Center in Bethesda, Md. They also recently held fundraisers -- baking and selling cupcakes and pies -- to help a former church member and nurse with expenses as she prepares to spend a year in Colombia helping residents with medical needs. The sales raised more than $1,200.

The idea for the pillowcase dresses came from a customer at a garage sale Alton had.

"I had a whole stack of pillowcases for sale, must have been my mother's," she said. "When a lady bought them all, I mentioned she must have a lot of pillows. She told me she makes dresses out of them. That's how it all started."

Alton submitted an application for funds to Thrivent Financial to help with costs. The organization provided free T-shirts for the volunteers and $250 to help with shipping.

Last week, sewers picked from the pile of vintage pillowcases and chose complementary scrap material -- ranging from florals and paisley to checks and polka dots -- and trim to create the finished product.

"You just cut out the arm holes and cut the top off and embellish them however you want," Alton said.

Connie Bartels of Waterloo found a pillowcase with a duck print.

"It seemed too manly, so I'm trying to make it more girly," she said as she added lace and ribbon to the dress.

"I like to sew, and I always like new projects," Bartels said of her reasons for helping with the project. "I think they'll be cute. They are all different. The girls will all be individuals."

"My daughter said I need to get out with people more," Avis Nelson said with a laugh. "But I like to help."

Elaine Bruns of Waterloo said after travelling to Africa a year ago she understands the need.

"They took us to a little village," she said. "I have a hard time understanding -- even though it happens here too -- how the government can allow people to be so poor."

"And it's the children who suffer the most," Nelson said.

As the women sew, each adds a pocket to every dress. Inside that pocket, the new owner of the dress will find a small cross made from yarn and plastic canvas by church members and a poem titled "The Cross in my Pocket."

Similar crosses and poems were included in the military Christmas stockings.

"We want to spread the word," Alton said.