WASHINGTON -- On the eve of her campaign kickoff, Minnesota Rep. Michelle Bachmann (R) received some very good news: The highly respected Des Moines Register Iowa Poll finds her "leading the pack," along with former Massachusetts Governor Mitt Romney, as the first choice of likely Republican Caucus participants. The news was even better for Bachmann on the individual ratings of each candidate. The Register reported Bachman is "in a different league from the other candidates," receiving a bigger favorable rating (65 percent) than any of the other candidates and a very low negative rating (12 percent) among Iowa Republicans.

The survey's vote preference question shows Romney and Bachmann leading (with 23 and 22 percent respectively) followed by former Godfather's Pizza CEO Herman Cain (10 percent), with all of the other announced candidates receiving 7 percent or less. With the caucuses at least six months away, however, voters' preferences are likely to change. The same survey found just 14 percent said their minds are "made up" to support their first choice candidate. The rest were either completely undecided (14 percent) or open to a different choice (69 percent). 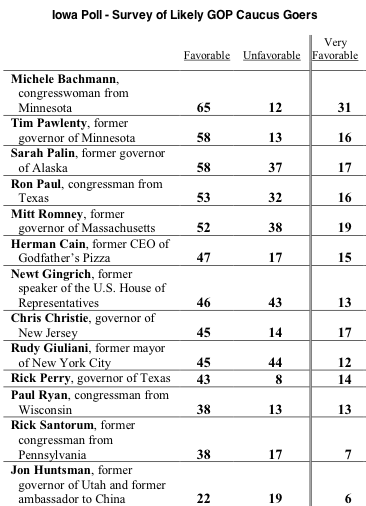 Pawlenty's strong favorable rating in Iowa suggests it is far too soon to write off his candidacy, despite expected low fundraising numbers.

Consider the lesson of New Hampshire's Republican primary in 2008. At the national level, John McCain's support dropped by nearly 10 percentage points during the first half of 2007, following his prominent support for immigration reform and negative coverage of his disappointing fundraising and a major campaign staff cuts.

The same trends were evident in New Hampshire, exacerbated by Mitt Romney's very early television advertising. As shown in the following chart, based on surveys conducted by the University of New Hampshire, Romney led McCain in New Hampshire throughout most of 2007, while McCain ran far behind and trailed Rudy Giuliani during much of the summer and fall of that year. 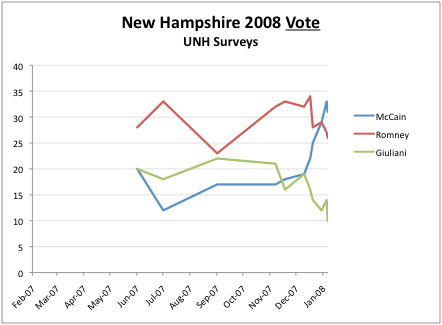 But while McCain lost support on the vote question in polls, his favorable ratings in New Hampshire remained strong. Even during his low point in the summer of 2007, 63 percent of New Hampshire Republicans continued to rate McCain favorably, while just 24 percent rated him unfavorably. His ratings at that point roughly matched Romney's. As the winter approached, Romney's support fell, Guiliani's collapsed and McCain was positioned to gain. Eventually, McCain won with 37 percent of the primary vote to Romney's 31 percent. 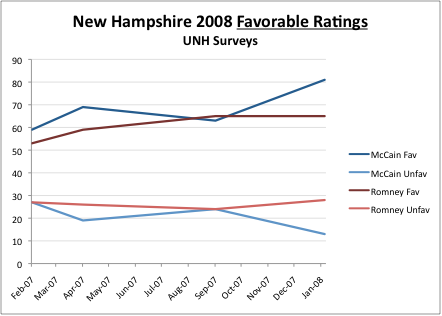 Of course, New Hampshire is not Iowa and John McCain -- who had also won the New Hampshire primary in 2000 -- is not Tim Pawlenty. Neither the current Iowa polling results nor the historical precedent offers a prediction about what will happen in Iowa in 2012. But the lesson from 2008 is to keep a sharp eye on candidates' favorable ratings.

Right now, the Register's ratings results indicate two very important things that are not clear from the horserace results: First, the intensity to Michelle Bachmann's Iowa support gives an early boost to her efforts to build an organization there. Second, Tim Pawlenty is surprisingly popular for someone polling just 6 percent of the vote.